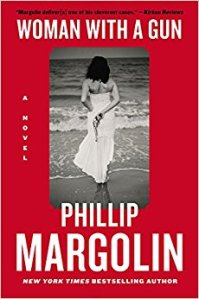 Last fall I had the pleasure of reading through Margolin’s Amanda Jaffe series.  The series as a whole was an easy 4/5 for me, and I really enjoyed them.  Unfortunately, Margolin has written several other novels, so enjoying those books meant that multiple titles got added to the TBR, and Woman With a Gun is the first of them I’ve read.

I really liked the pacing of this story.  We start in 2015 with Stacey, who is trying to write a novel but is feeling rather uninspired.  To pay the bills, she’s working as a legal assistant and finds it soul-suckingly boring.  (Aside: I empathize!)  On lunch one day she stops to see an art exhibit, but is drawn to a series of photographs.  When she sees the photograph that’s on the cover of this book, she is completely enamored – she can see an entire story waiting to be told.

The next section tells us the story of the photograph – the Cahill case from 2005.  A strange and mysterious murder that was never satisfactorily resolved…

I have mixed feelings about books that jump backward and forward in time, but Margolin handles it very well in this one.  I really liked that instead of using flashbacks or alternating chapters, large chunks of book are in one time before switching to another – there are only actually five parts to the  book: 2015, 2005, 2000, 2005, 2015 – which also works very well, as we slowly work our way back in time to understand what is going on, and then forward in time to find resolution.

The story was quite gripping, and I was lucky enough to start this on a lazy Sunday, and read it pretty much all in one go.  I was completely engrossed in the tale and anxious to find out who the killer really was.  It’s really a rather small circle of possibilities, which made the guessing even more engaging.

It did seem like Stacey’s love story part was rather hasty – an almost instalove vibe – and the ending, while satisfying, was still a bit bittersweet.

All in all, Woman With a Gun was an easy 4/5, and confirmed for me that I definitely need to continue working through Margolin’s books.

(#10 will appear in this month’s minireviews at the end of July!)