Well, we are almost done with peaches – on to apples!!  Things continue busy at the orchard, but I’m home today and it’s gloomy enough to feel like it’s a good day to catch up on some computer work!!

Edit: That was actually several days ago, but I’m finally going to post this for real!!

In college, Ben had a bit of a crush on his friend Alice, but one night changed everything – just when he was thinking about asking Alice out, he met Daphne and fell in love.  But now, years later, he’s starting to wonder if Alice was “the one who got away” and whether marrying Daphne was actually a mistake.  When a mysterious stranger in a bar gives Ben a watch that sends Ben back in time to relive some of the critical moments of his life, he’s suddenly faced with the real-life opportunity to change his fate…

There was a lot about this story that I really enjoyed.  I was afraid that it was just going to be about Ben cheating on his wife, but it’s actually about Ben reassessing his marriage and his life and recognizing his shortcomings and the way that he can make things better going forward.  I liked Ben a lot and found him an easy character to root for – it was really nice to have a male main character in this type of story, and extra nice to have him be a total jerk as so many fictional men are.  (Real-life men, too, I realize, but I feel like the jerks are disproportionately represented in romantic fiction.)  The time-travel aspect was also handled really well.  My main issue with this one involved the incredibly heavy-handed TOXIC MASCULINITY message.  There were constant passages about how ALL MEN hide ALL THEIR FEELINGS from ALL THE PEOPLE because that’s what they were taught by other men in their lives, yadda yadda (“Our friendship – like most male friendships – has been built primarily on ripping the piss out of each other”).  Like actually while most of the men I know aren’t likely to sit down and pour out every deep feeling they have, they’re fine with sharing what they need to share.  I genuinely do believe that there is a difference between men and women and the way they process feelings and emotions, and that men don’t actually have the same need to “get it all out” like women do, so this constant reiteration that the only reason men have problems is because they aren’t SHARING enough starts to really annoy me after a while.  Connected to that, but different, was my other big issue with the story – magically, Daphne is actually PERFECT and 100% of ALL their marriage issues are Ben’s fault (because he doesn’t share all his feelings!).  Absolutely NONE of them are hers!  She’s a PERFECT COMMUNICATOR and an ideal human being in every way and ONLY Ben needs to change to make their marriage blissfully happy.  This just… literally can never be true.  Human beings make mistakes and none of us are perfect, so it’s impossible that Daphne made zero mistakes in their marriage.  Laying all the blame on Ben just felt unrealistic and unfair.

BUT overall this was still a fun little story.  Serious enough that I wouldn’t quite call it a romcom, but lighthearted enough that it didn’t feel like a drudge.  If you like your romances with a dose of thoughtfulness, this is probably one you’ll enjoy.

The Sleeper & the Spindle by Neil Gaiman – 2* 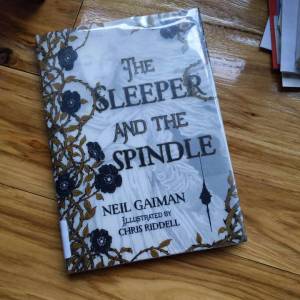 I’ve had this book on my TBR for a while.  It’s a picture book kind of thing with a retelling of Sleeping Beauty… ish… honestly, do you ever read books and wonder what the heck you’re missing??  That’s how I felt reading this one.  To me, it was just kind of bizarre and didn’t hang together very well, but I have seen so many raving reviews for this one.  I wasn’t a huge fan of the artwork, either.  I think this would have worked better as a full novel instead of a short story – the concept was interesting but not fleshed out at all, making it hard for me to connect with the characters.  Not for me, but loads of people love it, so it may be for you!

People We Meet on Vacation by Emily Henry – 3*

My lower rating for this one is a combination of having higher expectations for it because I really enjoyed Beach Read last year, and the fact that the main character would literally NOT STOP hating on Ohio.  Like basically every couple of chapters there had to be another paragraph or two of Poppy going on and on and on about how horrible it was to grow up in Ohio and how literally the worst thing that could ever happen in her life would be if she was forced to move back to that dreadful place.  Obviously I’m extra sensitive to Ohio because I freaking LOVE IT HERE, but in general I’m over novels having characters grow up in small Midwest towns that they can’t escape fast enough and then finding fulfillment and joy in the big city… like that would be okay if they didn’t then spend their entire time in the big city moaning about how they barely escaped the Midwest with their lives, as though they were literally going to DIE if they had to live there for another day.  I just.  Eye roll.  Whatever.  Believe it or not, most people who don’t live in a big city have CHOSEN to not live in a big city because they think cities suck, so you can stop feeling sorry for us.  We’re actually super happy with our lives in the countryside, so please find someone else to pity and insult.  I’m pretty over the whole “only people too stupid to escape live in the Midwest”… like actually we chose to stay here because it’s awesome so… suck it lol

ANYWAY the actual story itself was so-so.  Apparently literally all of Poppy’s problems (and everyone else’s) could be solved just be seeing a therapist, so it’s nice to know that that fixes everything.  I never really shipped Poppy and Alex – although I enjoyed their banter and thought they were great friends, it never felt like they were actually on the same page about what they wanted from life.  I personally found Poppy to be super self-centered and annoying.  It wasn’t a terrible read – there were a lot of funny and fun moments and some entertaining characters and adventures – but it definitely wasn’t one I would read again, although I’ll still try whatever Henry writes next, because I really did enjoy Beach Read. 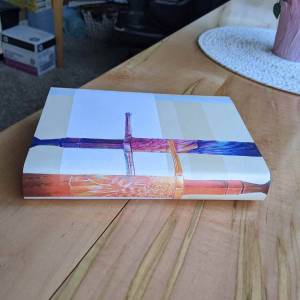 //published 2021// And yes, this is the reversible OwlCrate cover with artwork from Stiefvater and I love the way the sword lines up on the spine. //

Earlier in the year I finally got around to reading The Raven Cycle and the first book in the spin-off series, Call Down the Hawk – just in time to read the second book in the spin-off trilogy, Mister Impossible.  While I kind of wish that Stiefvater had chosen to do more with the ley line magic instead of the dreamer magic, I’m still really enjoying these books.  I also loved that Ronan’s brothers were a more important part of this story – I really love Declan, who is definitely my personality match of the brothers, so spending more time with him was great.  I really don’t want to wait an entire year to see how this story wraps up!!

Side note: Sometimes books in a series can be read as stand alones, but definitely not here – I even went back and read the last 50 or so pages of Call Down the Hawk to refresh myself as to where things had left off because Stiefvater jumps directly into the action!! 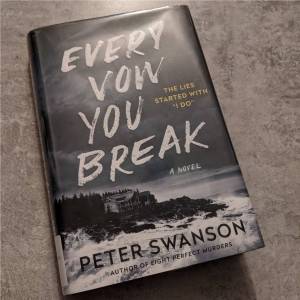 So on Litsy when you post a book review you can choose to rate it as a Pick, So-So, Pan, or Bail. My contention is that they need to add a “WTF” option for books that are, frankly, batshit insane yet compulsively readable.  This would definitely fall into that category!

I blew through this entire book in one evening because I did not want to put it down – despite the fact that no one was particularly likable, the plot was completely unbelievable, every twist just made the story more absurd, and the more I think about it the more questions I have… But I couldn’t stop reading!! Does that make it 2* or 4*? Do I rate it on whether I would recommend it to others or on how much I wanted to keep reading when I was reading it? It’s hard to say, so I guess I’m just going middle of the ground for my rating. If you don’t mind thrillers that are just genuinely over-the-top ridiculous, this may be the read for you!