The Clicking of Cuthbert by P.G. Wodehouse – 4* 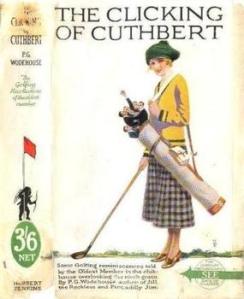 This is a collection of short stories, all of which are about golf.  In my question to read all of Wodehouse’s books in published order, this one was next, and I’ve kind of procrastinated on it a bit since I don’t really know much (anything) about golf, but I shouldn’t have doubted – although I certainly missed plenty of golfing references, the ability of Wodehouse to tell a hilarious story still shines through.  Most of the short stories are told by an old man whom we know only as the Oldest Member of the golf club.  He has many a tale to while a way an evening.  As with all story collections, they had their ups and downs, but overall the quality was excellent, and the stories were quite funny.

This was actually two stories in one book, and they were originally published separately, about four years apart.  I think they would have read better if they hadn’t been together, because they were actually rather similar stories – both female leads were television producers, both had relationship issues, both meet a really similar dude through work.  Overall they were perfectly nice stories (although a bit too sexy), but also pretty forgettable.

The Haunted Fountain by Margaret Sutton – 3.5*

Now that I’ve gotten into the Judy Bolton books that I don’t own, I’m reading them at a much slower pace as I have to purchase them as I go.  This one was a decent story, but it had almost no Peter in it, and Peter is my favorite character!  Still, Judy is always a great lead, and it was fun to catch up with a few other characters as well.

The Mysterious Heir by Edith Layton – 3.5* 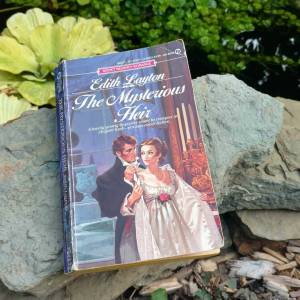 Some of you may remember that I purchased a book of random Regency romances on eBay a while back because it had some Georgette Heyer titles that I wanted.  I’m still reading the other books in the box, and The Mysterious Heir is my most recent one.  I really enjoyed this one a lot because Elizabeth and Morgan were super likable, and they actually communicated with each other, which is almost miraculous in Regency romances.  Morgan of course has a deep dark past, where his wife (now dead) betrayed him, and this is where the story went off the rails a bit, because instead of just having Morgan’s wife like have an affair or something, the author literally made her this nymphomaniac (although she didn’t use that term) who was always having sex with literally anyone who would (although none of this was graphic at all) and it just came through as weird.  I think the same impact on Morgan’s life/trust issues could have occurred with a slightly more believable situation with his now-dead wife.  However, other than the chapter of Morgan’s back story, the book was overall a fun romp that I enjoyed.

Lenski wrote several children’s historical fiction books back in the day.  Each one focuses on a child in a different region of the country, and they are all illustrated with Lenski’s absolutely delightful drawings.  Strawberry Girl is set in Florida around the year 1900, and it honestly blew my mind how frontier-like Florida was at that time – this is barely over a hundred years ago (and was less than fifty years earlier than when Lenski wrote the story – she says in her foreword that many of the adventures are based on first-person accounts from people she interviewed), yet the people are living a very rough and ready life without indoor plumbing, at a time when things like a cookstove were still considered rather fancy.

This was a really enjoyable story, and I highly recommend Lenski’s books if you are studying a certain region or time period.  It’s a children’s book, so things wrapped a little too conveniently at the end, but I let it go since the intended age range is around 10 years old.  All in all, this was a very fun slice of life story.

This one is also my #8 book for #20BooksofSummer!

I’ve mentioned before that I have a big soft spot for Landmark history books.  Aimed at middle school readers, they’re perfect for an overview or review of a topic.  This one looks at the run-up to the America Civil War, focusing on Douglas and Lincoln and their debates at the time.  The author did a really excellent job of explaining the various points of view on slavery at the time.  She never excuses or justifies slavery, but she does explain that the culture of the time meant that many people didn’t question slavery’s existence, and that didn’t automatically make them evil people.  Douglas is presented as a counterview rather than a villain – someone who was trying to find some middle ground to make everyone happy – and who ended up as most people who take the road do: with everyone mad at him.  Kelly points out how Lincoln’s views on slavery also changed through time, and that there were degrees of being “for” slavery – many people felt that it should basically fade out naturally by not allowing new slaves or slave states; other believed slaves should be educated and allowed more opportunity to purchase their freedom; some believed the government should purchase slaves and then free them, thus compensating owners, etc.  Kelly manages to get a lot of complicated thoughts across in a manner that was easy to read and understand.  I’m basically always a fan of Landmark books, and this one is no exception.