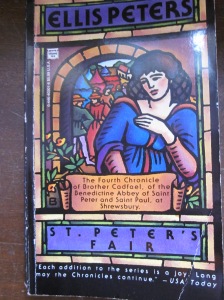 Another gem in the Brother Cadfael series.  In this fourth book, the annual abbey’s fair is being held.  But with Shrewsbury still in the midst of England’s civil war, the fair can be a place for more than honest trading.  Also, feelings are still running high in the town, which has suffered from the war.

The story is exciting, the mystery is good, and the wisdom of Brother Cadfael–and in this book, particularly, Father Abbot–shines through.