Oh, I’m back with more minireviews since I apparently have no idea how to blog in a timely manner any more.

This one was a borderline between straight romance and romantic suspense.  When in the midst of a bitter divorce, Eli’s soon-to-be-ex-wife is murdered, Eli becomes the prime suspect. A year later, the case against him has been dropped, but the actual murderer’s identity is unknown, meaning a cloud of guilt still follows Eli everywhere. He comes to stay in the old family home on Whiskey Beach, where he meets Abra, a jill-of-all-trades who should have really annoyed me but actually didn’t. Her free-spirit “be yourself“ attitude somehow actually came off as genuine so I ended up really liking her. Various other things happen at the old homeplace, including another murder, leaving Eli and Abra wondering how it’s all connected. This wasn’t on-the-edge-of-your-seat-are-they-all-going-to-die tension, but it did keep the story up-pace. This wasn’t my favorite Roberts ever, but it’s one I can see myself rereading at some point.  I actually really liked Eli’s character development, and somehow Abra was actually likable and sincere instead of being obnoxious.

Every year this one Litsy user sets up a “book list swap” where you sign up and include your top 10-20 books of the year, and she actually takes time to really match you with someone else with similar tastes.  Then you and your match swap best-of lists and try to read some of the other person’s books.  Theoretically you’re supposed to read them all in January, but I prefer to spread mine out, one per month, until I run out lol  Dragon Slippers was on my match’s list, so even though I actually had read this one before, I decided to give it a reread.  Overall, I enjoyed it, but not enough to bother rereading the whole series.  I don’t know why this book doesn’t quite hit the sweet spot for me, despite having a lot of the components I usually enjoy.  You can read my original review of the entire trilogy here. 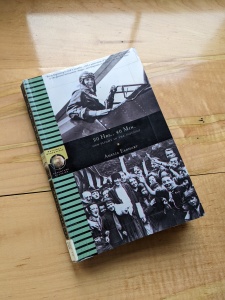 This book is Earhart’s personal account of her journey across the Atlantic by plane – she was the first woman to fly across the ocean, although she was a passenger and not one of the pilots.  Still, even being a passenger took some guts at this time, as only a few people had made the journey at all.  A lot of the book consists of excerpts from the journal she kept on the way.  At less than 200 pages, Earhart’s account was much more lighthearted and less technical than Charles Lindbergh’s The Spirit of St. Louis (which I read several years ago and never reviewed!  Why didn’t I review it??  I still don’t know!)

Towards the end of the book, Earhart mentions that it has only been 7 weeks since the flight itself, so this was written and published with a couple months of the historic flight. Earhart is modest and depreciating, even in the chapters where she is talking about her personal pilot experience. She’s very open about the fact that she, personally, did nothing to facilitate the journey of The Friendship other than go along for the ride, but it was still so interesting to read about. Because she was writing with the presumption that her readers already knew a lot of the background for the flight (since it had literally just happened), there were times that I felt a little lost, but it was still an enjoyable read. I also loved hearing her thoughts on what direction the aviation industry should/would take, and different ways she believed people (and women) should be involved. Almost a century after this flight, it’s amazing to see how much of what she suggested did come to pass.

This isn’t exactly a book I finished and felt like everyone should rush out and read, but it was an easy read with a likable and intelligent narrator, and a worthwhile piece of history to explore, if nothing else than for a glimpse of the aviation industry in its infancy.

The Eight by Katherine Neville – 4*

Another book that’s been on my TBR for quite some time, but I’ve put it off for quite a while because it’s about 600pgs long.  While I did enjoy it overall, this was one of those books that made me feel a little stupid while I was reading.  It’s full of chess, math, music, and history, and sometimes I felt like my base knowledge on those topics wasn’t enough to get the full impact of what was going on.  This book also has dual timelines, something that doesn’t always work for me, but I was fully invested in both the French Revolution timeline and the present-day one.  One funny thing was that this book is a lot older than I thought it was – published in 1988, so its setting of the 1970s was a bit of a different vibe that I get from a lot of books (and I actually had to look up info about the gas crisis).  This was a long one and quite dense, so it took me a while to read, but it was overall a worthwhile endeavor.

The Trouble With Hating You by Sajni Patel – 3*

This romance, which I read for the traveling book club, was a bit of a struggle for me, mainly because I found the main character, Liya, to be just incredibly unlikable.  I get that she had suffered a lot and had some trauma/abusive situations she was overcoming, but she was still 100% bitch 100% of the time and it really got old for me.  I don’t feel like having bad things happen to you means you get to treat everyone around you like garbage, especially since those people literally have nothing to do with the bad things.  It also felt like every character in the story hated the concept of marriage and spent a LOT of time explaining why marriage and being married is such a horrible idea.  This was emphasized by the ending, where the main characters agree to move in together, rather than actually make a legitimate commitment to each other (the moving in wasn’t like “we’re doing this for life” but like “we’re doing this because it will be much easier to get untangled if it doesn’t work out” vibe), which I hate.  As usual, I’m doing a lot of whining – but there were some really fun moments in this one as well, and several of the background characters were great fun.  It was an okay read for me, but I’m not particularly interested in finding more books by this author.