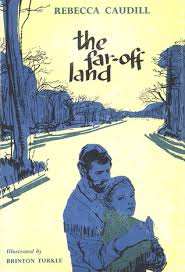 As a little girl, I loved the book The Happy Little Family by Rebecca Caudill.  Aimed at a much younger audience than this title, that book is more a series of little stories about the same family.

The Far-Off Land is more of a YA novel of sorts.  Set in 1780, the story is about Ketty, a young woman who, orphaned, has been taken in by a community in North Carolina comprised of people known as the Moravians.  I’d never really heard of the Moravians before, but they appear to be a Christian religion similar to the Quakers, in that they are very peaceful and (at least in the 1780s), focused a great deal on acceptance, hard work, non-aggression, and kindness to all.  Ketty has lived within this community for several years when our story opens, but she doesn’t stay there for long – in the first chapter her long-lost older brother appears from the North Carolinian frontier.  He sweeps her up to come live with him and his family, and to journey with them even further west to an area on the North Carolina-Tennessee border known as the French Lick.

While Ketty isn’t completely sure she wants to go with her brother, who is practically a stranger, the Moravian elders urge her to remember and embrace the importance of family unity.  Ketty sets off with her brother (Anson).  He and two other men have built a flatboat, on which they intend to float down various rivers with their families until they arrive at the French Lick.  Over the next several months, Ketty does a great deal of personal growing as she faces situations and difficulties that she never imagined.  Of course, she finds some romance along the way, but it’s a rather minor part of the overall story.

The Far-Off Land was an interesting book because it wasn’t exactly a happy one.  Life in the 1780 frontier is no joke, and the group faces some hard situations, including injury, disease, hunger, bad weather, and Indians.  Through it all, though, Ketty learns the importance of loyalty and trust, but she also learns the importance of standing strong for her own beliefs.  While Ketty respects her brother and his position of leadership in her life, she isn’t afraid to do what she believes is right, and, in the end, she is respected for her actions.

The treatment of the Indians is the big division between Ketty and the others.  Because the Moravians have always treated the Indians with respect and kindness, Ketty has never known them to be dangerous or frightening.  However, the other settlers have all experienced violence at the hands of the Indians – and have delivered violence of their own.  Ketty struggles a great deal with trying to understand how to hang on to her convictions, even in situations where  her convictions seem dangerous or foolish.

Before she left the Moravian town, one of the women there gave Ketty two life-rules, to which Ketty clings throughout the story:  To be present and to be reverent.  Sister Oesterlein explains that  by being present, Ketty can hear and respond to the needs of those around her, and that by being reverent she can learn to value and cherish life and beauty everywhere they are found –

“By loving people, Ketty, you will come to understand their needs.  By loving and caring about people – all people.  See people as we Moravians see them – not as friends or enemies, but as people, red people and black people as well as white, Tories as well as patriots, the gentleman’s slave as well as the gentleman.  If love goes with you through the wilderness, Ketty, you needn’t be afraid.  There isn’t any evil in the world that won’t give ground before a loving woman.

…Reverence God and all that He has created.  Especially reverence life, Ketty – all life.  Reverence and enjoy the lovely things of earth – wind in wheat fields, cucumber vines in bloom, the smell of scythed hay in windrows, the noise of thunder, and the stillness of the snow.  Whatever falls to your lot, lean times or times of plenty, if you care about people and walk reverently, Ketty, you will be doing right.”

This isn’t a book of gripping excitement or intense doings, but a story of a young woman who is trying her best to learn to walk lovingly and reverently through life, even when she is surrounded by people who tell her that that is a foolish way of life, and that the only way to survive is by being the strongest, and taking whatever one needs from the weakest.  It is not at all an overtly religious book, and I really felt that the concepts of being present and being reverent were equally applicable to life whether someone is religious or not.

Really, my biggest beef with this  book is that it ended quite suddenly.  We spend all this time traveling to the French Lick, and the book ends before they get there!  It really felt like we could have cut out a little bit of the traveling and showed a more conclusive ending than Ketty and her man paddling off in a canoe to start their new life, but maybe that’s just me.

Overall, this book was a thoughtful 4/5.  While not a beloved classic like A Happy Little Family, The Far-Off Land still  has plenty to recommend itself in thought-provoking and engaging story-telling.

PS I haven’t looked into very closely, but apparently the Moravian Church is still around?  And, more intriguingly, still based in North Carolina! 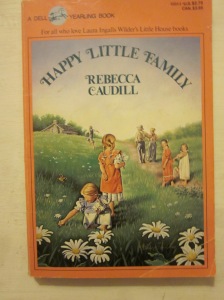 This is a super happy and very simple little book, just a few chapters about a pioneer family.  The pencil drawings are perfect and sweet.  The stories center around 4-year-old Bonnie.  The book took me maybe a half-hour to read.  It’s a perfect read-aloud for little ones, and precious in every way.  5/5.