So I don’t usually do book tags, but Erika in Bookventureland completed this one, and I really thought it was interesting.  I would love to see what other people’s methods are for compiling/tracking/dealing with their TBR are??  I was just thinking about this because I know that some people try to keep their list at a manageable (haha) level, while I tend to be someone who just extravagantly adds books with absolutely no self-restraint.  So no specific tags, but I would really, really enjoy reading other people’s thoughts on this one??

Seriously, I would love to see other people’s answers to these questions, so be sure to let me know if you decide to answer this one!! 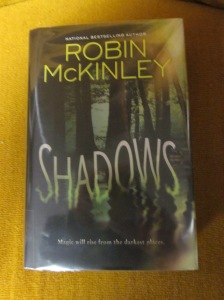 First off, Robin McKinley, what the heck are you doing publishing ANY book other than the next installment of Pegasus?!?!?!!?  (Sorry, I realize I rant about this pretty regularly, but I’m still sincerely frustrated that someone would purposely published HALF A BOOK in 2010 and then say that maybe she’ll get around to publishing the SECOND HALF in 2014?!?!!?)

Still, while I’m waiting, I figured I may as well check out whatever book it was that McKinley deemed more important than finishing Pegasus.  Shadows was a solid read.  While I didn’t love it as much as Spindle’s End or Beauty, it was still a lot of fun.

Per usual, McKinley does an amazing job with world-building.  What I love about her books is how she rarely bothers to explain what the world is like.  As you read, more and more things fall into place, but it’s through casual reference more than actual explanation.   Some things she never does explain, leaving the reader to put his own interpretation on what is happening.  In this book, we have this sort of alternate universe where magic is a thing, but in New World (read: United States), magic has been outlawed, and, two generations back (from our heroine), everyone who could do magic (it’s a sort of instinctive, natural talent) had that gene removed from their being, so that magic-doers will no longer be born in the New World at all.  What our heroine (whose name I can’t remember… sorry, it’s been over a month since I actually read this book) discovers is that magic is perhaps not as eradicated as the government would like everyone to think.

While I’m not always a fan of first-person narrative, McKinley usually does a good job with that voice (Dragonhaven, for instance …  a book I’m planning to read again if my sister ever returns it HINT HINT), presenting a protagonist who is easy to relate to and isn’t stupidly obnoxious.  I DESPISE reading YA books in first person where the narrator is constantly swearing and thinking about nothing but sex.  I’m not actually interested in everything you’re thinking – I’m interested in the story you’re telling so please TELL IT.  McKinley strikes the balance of keeping her first-person narrator personable without dragging us down into every single emotion that flashes through her being.

Here’s the thing that gets me about McKinley: she basically never does sequels.  (Yet another reason that Pegasus was such a betrayal.)  But this book truly felt like the beginning of a trilogy or something.  The story finished strong and undisappointingly (new word for today), but at the end, it really felt as though she had pulled together a team that was going to be fighting the government, except we just have to imagine how that goes because she’s never going to tell us.  (I also think I read somewhere that she is really against people writing fanfiction about her characters, so there isn’t even that small comfort.)  Far more so than some of her fairy tale books, Shadows left me with a slight feeling of dissatisfaction, simply because I wanted to know what everyone was going to do next.  There were also some nagging unanswered questions about why the government was so against magic and that sort of thing as well.

Still, overall this was a book I had trouble putting down (obviously, since my main complaint is that there isn’t more of it!) and definitely enjoyed.  4/5.