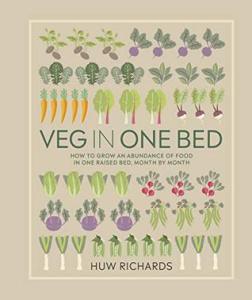 This was a solid vegetable gardening book but with one big weakness – it wasn’t clear which zone Richards is planting in.  Basically, the entire book is set up with specific instructions on what to do each week of the year in order to have a raised 10×4 vegetable bed in constant production.  Richards says all you need is that one bed and also a sunny windowsill for starting seeds.  His instructions are clear and he also does a nice job of providing you with substitutes in case one of the veggies he’s planting aren’t to your taste.  He glosses over what I call the “hungry” veggies – tomatoes and peppers – by saying they do best in their own, separate containers (like a 5-gallon bucket) and focuses on lettuces, peas, beans, and that sort of thing.  It’s very well organized and tells you what to do on what specific day… except it’s completely unclear as to what region this plan is for.  Where I live in Ohio is completely different weather/frost dates than South Carolina or Minnesota, but there isn’t any guidance as to where Richards assumes you live in order to implement his date-specific plan.  The book was originally published in the UK, so maybe just everyone in the UK has the same frost dates??  Some suggestions for altering some of the dates to accommodate different growing regions would have been extremely helpful, as the rest of the information is quite useful. 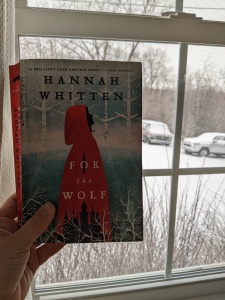 This was another traveling book club book, and while I overall did enjoy it, the world-building was extremely uneven, which made it hard for me to really get into the story.  The story centers on two sisters, Neve and Red, princesses in a small kingdom backed up against an (evil) enchanted forest.  Throughout the centuries, any time a second daughter has been born to the royal family, said second daughter is destined to be sacrificed to the Wolf who lives in the forest.  This appeasement keeps the Wolf from unleashing evil monsters out of the forest… or so everyone has always been taught.  It will come as no surprise to the reader to discover that the Wolf is actually a handsome man, bound to the forest against his will and doing his best to keep things under control.

I actually really liked the characters in this one and thought the concept was interesting – a sort of Red Riding Hood/Beauty and the Beast mashup – but the world building was SO uneven and mysterious – Whitten dribbles out tiny bits of information and I spent way too long being confused about how the magical system worked, what the woods were all about, why the Wolf was even there, etc. Because the Wolf actually needs Red to work with him, it seems like it would be pretty freaking natural for him to actually EXPLAIN some things when she arrives… but no one does.  Instead, we just spend more time wandering around with everyone being mysterious and no one actually telling anyone about anything that’s going on and it was SO annoying, because it felt more like a device than the way things would actually have happened.  Still, I’ll probably check out the second book when it’s released this year because now that I know more about what’s going on, I think I’ll enjoy the writing more. 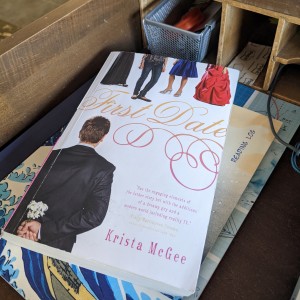 This one was a mixed bag.  Part of it was that I didn’t really realize it was supposed to be a riff on the (Biblical) story of Esther until about halfway through the book – in that context, it actually made more sense, because some of the random little things flowed better when I thought about them within the Esther framework.  Basically, Addy, along with a pile of other teenage girls, is chosen to be on a reality show which, over several episodes, will allow the president’s handsome teenage son to pick out his date for prom (or maybe homecoming, whatever).  Addy is an orphan whose parents were killed when they were serving as missionaries.  Now she attends a small Christian school and lives with her uncle.  Her principal and her uncle both encourage her to participate in the show, even though she thinks it sounds dumb, because it could be a good opportunity for her to share her faith.  Throughout the story, the other girls are bratty, the president’s son is super nice, and Addy was… well, Addy was really my problem with this book.  She’s supposed to be the good Christian example, but she was really just kind of selfish and self-centered.  She’s constantly worried about what other people think, so instead of sharing her faith, she’s always hiding it.  That entire aspect of the story was really uneven and made it difficult for me to root for her.  She’s just such a cardboard Good Girl (TM) who doesn’t care about boring, worldly things like makeup or clothes or dating – she cares about getting good grades and going to college!  I found the dichotomy between Good Girl Addy and Bad Girl Everyone Else to be borderline offensive in its shallowness – girls who like to do their hair are automatically little bitches, apparently, and I didn’t think that was a good message.  It wasn’t a terrible book, but my inability to like Addy made it a pretty blah read.

Made in Manhattan by Lauren Layne – 3.5* 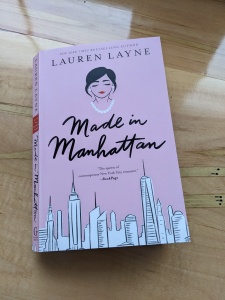 I’m always excited to pick up a new Lauren Layne book, and while I enjoyed this one, it wasn’t my favorite of her books.  The antagonistic attitude between the two main characters went on a little too long, and this book could have REALLY benefitted from hearing something from the male MC’s perspective.  Having just Violet’s thoughts/opinions made it hard to get behind the sudden (?) change of heart when the two eventually got together.  There was some fun banter and entertaining side characters, but this wasn’t one I particularly see myself revisiting. 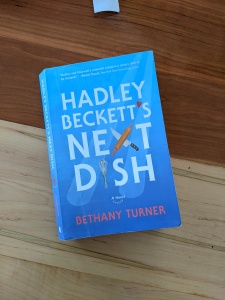 It’s funny, as I’m writing these reviews I realized that I read three books in a row where someone was a jerk for a little too long to make the story work.  Same thing happened in this one – Max is a complete dick and stays that way for far too long into the story.  By the time he finally becomes a “better” person, I legit didn’t trust him because he kept acting like he was going to change and then not.  Hadley was a little too goody-goody and I never felt like she really acknowledged the fact that she wasn’t actually perfect.  While there were some fun moments and I liked the concept, once again I just couldn’t get behind these characters enough to really enjoy the story.