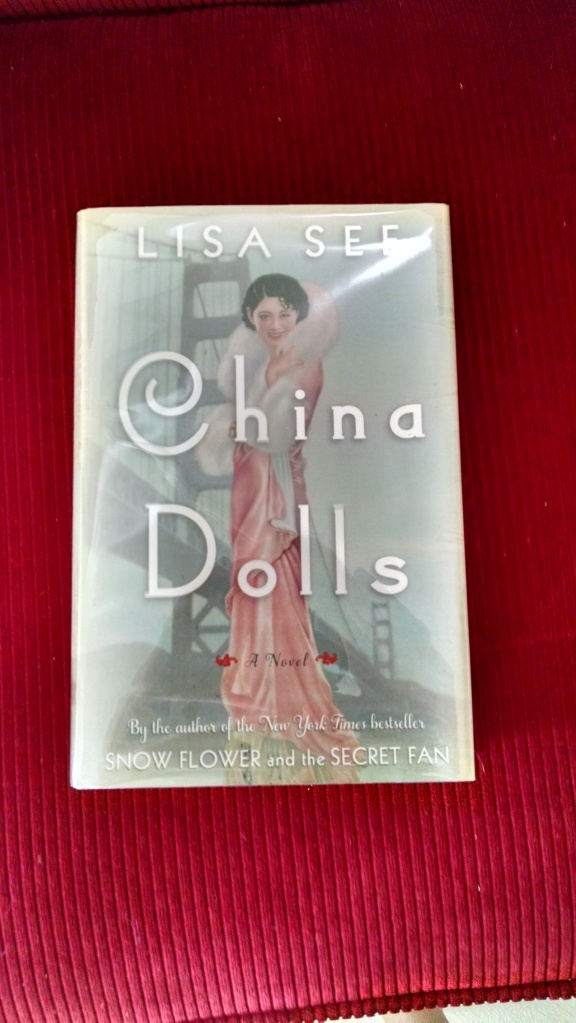 So I’ve been reading a lot of books set in the first half of the twentieth century.  One of these days I’ll move past World War II in my (very very very slow) study of twentieth century history, but there is just so much about the world wars and the Roaring Twenties and the Great Depression, and I keep finding books that look so interesting from those decades so…….

I picked up China Dolls in hopes of reading about a different culture in the 1930’s leading into the war.  From the dust jacket:

San Francisco, 1938:  A world’s fair is preparing to open on Treasure Island, a war is brewing overseas, and the city is alive with possibilities.  Grace, Helen, and Ruby, three young women from very different backgrounds, meet by chance at the exclusive and glamorous Forbidden City nightclub.  Grace Lee, an American-born Chinese girl, has fled the Midwest with nothing but heartache, talent, and a pair of dancing shoes.  Helen Fong lives with her extended family in Chinatown, where her traditional parents insist that she guard her reputation like a piece of jade.  The stunning Ruby Tom challenges the boundaries of convention at every turn with her defiant attitude and no-holds-barred ambition.

The girls become fast friends, relying on one another through unexpected challenges and shifting fortunes.  When their dark secrets are exposed and the invisible thread of fate binds them even tighter, they find the strength and resilience to reach for their dreams.  But after the Japanese attack on Pearl Harbor, paranoia and suspicion threaten to destroy their lives, and a shocking act of betrayal changes everything.

The book is told in first person (thankfully past tense!), but the narrative is split between all three of the main characters.  For  me, this didn’t work for two reasons.  The first was that even though these three girls are very different in personality, goals, and background, their voices sound incredibly similar.  And I think the reason for that is my second reason for not liking the narrative style – all three are very reserved.  Usually, the point of a first-person narrative is that we get to hear the thoughts and ideas and prejudices and dreams of the narrator.  But See gives us very little of that.  I think that this book would have been much better written in third person.

A slightly spoilery reason is that someone in this book is not actually Chinese, but Japanese.  After Pearl Harbor, many Japanese were put into camps (a horrible blot on our history, and one I’ve been interested in learning more about since I read Concentration Camps USA, and part of the reason I picked up this book to begin with), so when one of our three  narrators is betrayed, it’s a big deal.  We don’t know who the betrayer is, but one of the other narrators is blamed.  To me, this is a classic example – the tension of the book could have been much, much higher in third person.  As it is, we already know that the girl who has been accused isn’t the  betrayer, so the tension is gone.

None of these girls were particularly likable for me.  All three are rather ruthlessly ambitious, and the lack of personal thoughts means that, as a reader, I don’t really understand a lot of what drives them.  Plus, I’ve never been any kind of performer, so the intensity of the desire to be dancers is lost on me.

While there were interesting glimmers of American-Chinese culture, See also seems to assume, at some level, that we already know a lot of about what’s going on.  As someone who knows virtually nothing about this culture, I could have used a a few more explanations – but, once again, the first-person narrative prevents that from being a natural part of the story.

There’s also this whole weird love-triangle situation that seems pretty unnecessary and strange to me.  Because the boy involved is not Asian, I think we could have had plenty of drama by just focusing on how taboo it was for a “white” person be romantically involved with, well, anyone not considered white.

Overall, it felt like there were a lot of really intriguing cultural issues that could have been explored, but instead we ended up with a novel that basically could have been about three white girls, except for the part where one of them gets thrown into a concentration camp (and even that part of the story is really glossed over – I was hoping, since I was stuck listening to three narrators, that I would at least get some intriguing material of daily life inside the camp, but instead we basically don’t hear from that voice the entire time she’s in the camp so).

While this was a fine story, and I’m sure many people love it, I have found more and more that I rarely enjoy a book that has “A Novel” printed on the front.  They end up covering far too much time, with depressing undertones, little redemption, and not a lot of creativity or challenge.  China Dolls fit the basic novel-writing premise.  Instead of pursuing intriguing cultural differences and helping the reader to understand what it was like to be a Chinese (or Japanese) American leading into the war, we got a tired love triangle in impersonal first-person narration.  The story was meh and the character development weak, leaving me with a 2/5.