So I find that I not-infrequently read books that I just don’t have a lot of things to say about.  Sometimes it’s because it was a super meh book (most of these are 3/5 reads), or sometimes it’s because it was just so happy that that’s about all I can say about it!  However, since I also use this blog as a sort of book-review diary, I like to at least say something.  So I’ve started a monthly post with minireviews of all those books that just didn’t get more than a few paragraphs of feelings from me.

Last Christmas in Paris by Elizabeth Gaynor and Heather Webb

This book is a collection of letters written between several different individuals during World War I.  The majority of the correspondence is between Tom and Evie – Evie is the younger sister of Tom’s best friend, Will.  It’s pretty obvious that Tom and Evie are going to end up together, but that didn’t diminish my enjoyment of the story.

I really loved this book for about the first 3/4 of the way.  The letters were delightful, the characters engaging, and the voices different enough to make it really feel like I was reading letters from and to different people.  Epistolary tales can be rather narrow, but because we have letters between people besides the two main characters, the story felt fairly well-rounded.  It definitely had a Guernsey Literary and Potato Peel Pie Society vibe about it.  I really liked the upbeat sense to this book.  It was serious, yes, but it wasn’t all doom and gloom and there were no plot twists were someone turned out to be gay.

But then Evie goes to France also, and the story just kind of fell apart.  The correspondence became disjointed, and the characters no longer felt like they were being true to themselves.  There were also a few instances where I was uncertain of the continuity because of weirdly long gaps between letters.  It was very strange to me that for the first three years, they write letters all the time, then suddenly in 1917 and 1918, there are only a handful of letters, which I think added to the feeling of disjointedness.

In the end, a 3/5 read for a book that started very strong and then just sort of petered out.

Something Fresh (AKA Something New) by P.G. Wodehouse

In my quest to read all of Wodehouse’s books in published order, I have waded through over a decade’s worth of school stories and short story collections.  While all of them have been readable and even enjoyable for a one-time read, there have only been glimpses of what I consider to be genuine Wodehouse magic.

But the title of this book is definitely appropriate, as this is the first book that really begins to collect all the bits of what will later be the Wodehouse formula. Plus, it introduces one of my all-time favorite Wodehouse characters, Lord Emsworth of Blandings Castle.  While this book may still not be up to the standards of some of Wodehouse’s later works, it was still a delight from beginning to end.

After reading a collection of Wodehouse’s correspondence back in late 2016, I sometimes refer to A Life in Letters to see if Wodehouse himself had anything interesting to say about my current Wodehouse read.  I was intrigued to find that even he thought that Something Fresh was a new and better direction for his writing as well.  Was it because he found and married the love of his life a few months earlier?  I like to think so.

Brighty of the Grand Canyon by Marguerite Henry 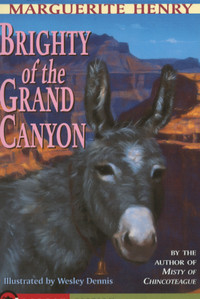 As I’ve mentioned before, Henry was one of my favorite authors growing up, and I devoured all of her books.  I collected a lot of them in cheap paperback editions published by Scholastic, and although I’ve upgraded a lot of them through the years, I still have a few of those paperbacks with my name scrawled in painful 2nd-grade cursive on the flyleaf.

I could look at his illustrations all day!

It had been a really long time since I had revisited this title, and while it was a decent story (and the illustrations by Wesley Dennis were magical as always), it really wasn’t one of my favorites.  In some ways, the story feels very choppy.  It’s about a little wild burro who lives in the Grand Canyon at the turn of the century (Theodore Roosevelt is president, and is even in the story!).  The problem is that Henry tries to tell both the story of Brighty’s everyday life + how he helped make the Grand Canyon the park that it is today AND the story of an old prospector who was murdered and how Brighty helped bring the killer to justice.  Except… the murder part feels very strange in a children’s book, and it also takes like ten years to solve the mystery, which makes no sense because why is Jake still around after all this time???  The murder mystery was definitely the weak part of the tale.  If it had been jettisoned and more focus had been made just on Brighty’s life in the Canyon, I think the book would have read better.

In fairness, Henry was basing Brighty on a real burro, who, in real life, did discover a clue that lead to the capture of a murderer – but still.  Brighty had plenty of other adventures.  Still, a very readable little book, and the illustrations really do make it a joy.  3.5/5.