Have I mentioned that my life is pretty much just peaches right now???  You all really just can’t understand LOL  In the meantime, here are a few books that I read all the way back in June… 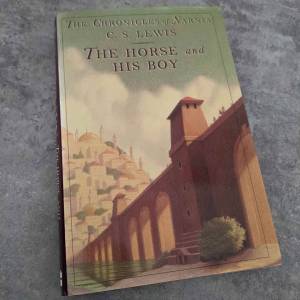 Growing up, this was one of my least favorite books in the series (along with The Silver Chair), but every time I reread it, I enjoy it more.  There’s a lot to soak in here about providence and why bad things happen to people and how that all works together for good, plus it’s just a fun story.  Narnia is always a joy to me.

Kitty’s Class Day & Other Stories by Louisa May Alcott – 3*

I’m a huge fan of Alcott, and some of my all-time favorite books were penned by her.  However, I’ve had this collection of short stories on my shelf for literal years and somehow never read it… and when I did, I honestly wasn’t that impressed.  The subtitle for this one is “Proverb Stories” and each tale has a little saying/proverb at the beginning and then the story goes on to illustrate it.  Consequently, these came across as a little on the preachy side.  Alcott is always a fan of making her writing somewhat moralistic, but I feel like that works better with her longer-form writing, as we are able to see characters grow and mature organically.  Here, with only a few pages per story, the lessons felt a bit too in-your-face for my tastes.  Perfectly fine but honestly not particularly engaging.

My reread of the Potter books also continued in June with a chapter a day of the fourth book.  I think this is where the series really starts to take off, with a lot of connections being made.  It’s a chunkster of a book and sometimes does feel a little ponderous, but overall I still find this series plenty entertaining.

Written in Starlight by Isabel Ibañez – 3.5*

In May I read Woven in Moonlight and found it to be a decent enough read that I wanted to pick up the sequel, Written in Starlight.  It’s hard to tell about this one without giving away some spoilers for the first book, but basically there is a character from the first story who ends up being sent away into the jungle as a punishment at the end of the book.  It honestly felt a little jarring, so reading the second book felt like reading the other side of the coin.  Although the main character is different, it really ties in with the first story and, I felt, tied up a lot of loose ends.  Overall, I think I actually liked this one better, even if the main character was super dense from time to time.

My husband is a huge Zeppelin fan, so we have several nonfiction books about the band.  In my quest to read all of the books I own (LOL) this one was the next stop.  Published in 1991, it was written at a time when there was still a lot of chatter about whether the band would get back together, with John Bonhome’s son, Jason, as the drummer.  This book read more like an extended fanzine, with a lot of information about band paraphernalia, concerts, albums, concert memorabilia, etc.  If you already love Zeppelin and are just looking for some random tidbits, it’s worth picking up for the photographs if nothing else, but if you don’t know much about the band, this isn’t really a great place to start, because the authors definitely assume that you already have foundational knowledge about the band members and the trajectory of the band itself.  I definitely preferred Flannigan’s sections to Cross’s – I find Cross’s writing to be somewhat condescending, something I also noted when I read his biography of Kurt Cobain, Heavier Than Heaven.  Ultimately, Cross felt like it was super important to spend a great deal of time hating on Hammer of the Gods by Stephen Davis (which I haven’t gotten around to reading yet), which, whether or not his claims were justified, just came through as rather petty.  A moderately enjoyable read, but not one I’d particularly pick up again.