Around the World in Eighty Days by Jules Verne – 3.5*

I’m not sure I had ever read this Verne classic, and there was a bit more mystery than I was anticipating.  This is a book that, in order to enjoy, you have to keep in mind when it was published.  I was kind of mind-blown about how much of the around-the-world travel meant moving through British territory at the time!  My favorite part was when Fogg’s servant rescued the girl, but the girl views Fogg as the hero!  Part of the reason that I can’t rate this book higher is just because Fogg himself is a very dull character in the sense that we never get to see what he is thinking or feeling.  We spend way more times with the thoughts of his somewhat bumbling servant and the policeman who is determined to catch Fogg.  Still, it was a really fun story, and a way easier read than I was anticipating.  As usual, Verne tends to get a little lecture-y but not nearly as much as he does in, say, 20,000 Leagues Under the Sea.

The Inimitable Jeeves by P.G. Wodehouse – 5*

It’s really hard to go wrong with Wodehouse, and even harder to go wrong with a Bertie and Jeeves Wodehouse.  This is really more of a collection of short stories gently connected by tales of Bertie’s friend Bingo’s disastrous love life.  These definitely follow a pattern (Bertie reluctantly gives up several pieces of dreadful clothing for the sake of Jeeves throughout the book), but when the pattern is so delightful, it’s hard to complain.  I loved every page.

I really wanted to get a bingo on my January Bingo card, so I needed to read a book that was being made into a movie this year, and apparently Death on the Nile is hitting the big screen sometime in 2020.  I’ve read this one before and when I started to read it again, I remembered whodunit, but weirdly that almost made me enjoy this one more than I have in the past.  This time, I was able to watch how Christie really does give her readers enough clues to solve the mystery themselves if they know where to look.  It was sort of like being behind the scenes of a play, watching how all the tricks are done.  I’ve reviewed this book before, talking about some of Christie’s more philosophical moments in this story, which I still enjoyed.  It is obvious from Christie’s writing in general that she strongly believed that we choose whether to do good or to do evil, and that is a particularly strong theme in this story.

Some Kind of Wonderful by Barbara Freethy – 3.5* 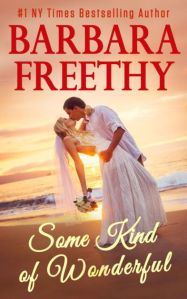 This was another free Kindle book I picked up many moons ago (March 2017 if you’re interested) and finally got around to reading.  Like Your Perfect Year, which I read back in November, this book definitely suffers from having a romcom cover/synopsis, but actually being a more serious, novel-ish read.  It wasn’t a bad book, but it wasn’t what I was expecting, and I really wish that publishers would stop making these books look like they are lighthearted fluff when they aren’t (or maybe authors need to decide whether they are writing lighthearted fluff or something more serious).

Anyway, this was a decent story about a guy who finds a baby outside his apartment door. When he reads the note attached to the baby’s car seat, he finds out that the baby is actually his niece, the daughter of his sister for whom he’s been looking for years, ever since they were separated into different foster homes as children.  He has no real idea how to take care of a baby and ends up asking help from his across-the-hall neighbor who, conveniently, is both kindhearted and single.  However, instead of being a fluffy romp with baby shenanigans, this ended up being a more serious story about adoption, infertility, addiction, abuse, and helping those in need.  I thought the issues were handled sensitively and well, and I really appreciated that there was a Christian character – a pastor, no less! – who was actually a decent human being who was trying to help and serve the people around him.  I had a few issues with the way the story was written – there is the weird “maybe our mom is an angel guiding us” thing, the whole situation with the pastor’s church possibly getting closed down felt a little clunky, and there really wasn’t a way that everyone who loved the baby could end up being the baby’s parents, so there was always going to be some kind of bittersweet ending for some characters.  All in all, a decent read, but not one I would pick up again, and not quite the relaxing story I was hoping to find.

ALSO there was literally NO beach in this story and definitely no bride on a beach, so WHAT is with the cover?!

So I have been meaning to read some of Verne’s work ever since I read a biography about him almost a year ago.  I decided to start with what is possibly his most famous work, and the first of his that I read as a child.  My dad, for some reason, LOVES Jules Verne.  I think that as an engineer, Dad appreciates the technical and scientific method of writing.  Combined with the fact that Verne was quite ahead of his time–many times he writes about things that no one had even imagined at the time of his writing–this makes Verne a fun classic author.

The “20,000” part is a bit of a trick, though, considering that the ocean isn’t even 20,000 leagues deep–the narrator of the story actually travels 20,000 leagues around the world while underneath the ocean (sneaky, I know).

Verne’s strength is in his descriptions of places and natural phenomenon; his weakness is in character development.  Most of the  people in his stories (including the narrator) feel very flat.  Even Captain Nemo, with his mysterious hatred for land remains quite mysterious.  As for the narrator and his companions–well, you understand how they are going to react with the first couple of chapters, and they never surprise you for the rest of the book.

Despite this, I still recommend 20,000 Leagues.  When you read it, imagine being a young boy in the mid-1800’s, reading this story as a serial, anxiously anticipating the publication of each new chapter, full of descriptions of an aquatic wonderland far below the surface of the ocean.

This biography followed the life of one of my dad’s favorite authors, Jules Verne.  The author of such famous tales as 20,000 Leagues Under the Sea, Around the World in Eighty Days, and Journey to the Center of the Earth, Verne wrote a bizarre and (at the time) fresh combination of adventure and science fiction presented as almost-fact.

While Verne’s books can sometimes get overly technical (I learned to skip any paragraph with latitudes and longitudes when reading 20,000 Leagues), they are still great fun, and classic adventures.  Reading this biography inspired me to reread (and first-time read) some of Verne’s classics, so you can expect to see some of the appear over the next several months.

This biography was well-written and fairly easy to read (it wasn’t the author’s fault that apparently everyone in France was named either Jules or Jacques).  Verne led an interesting life, and the author was respectful in his writings.  (So often, modern biographies love to turn everyone into bisexual whores based on “recently discovered letters” or some such fiddle-faddle.  I’m not saying that everyone was living pure and clean lives, but I do find it hard to believe that everyone in the 1800’s was living a secret double life dressed in drag.)  While he would mention various rumors or theories, he was honest about the sources that claimed such rumors.  Overall, he stuck with the actual point of a biography–the progress through the subject’s life.

I greatly enjoyed this read, and look forward to reading some of Vernes’s stories soon.