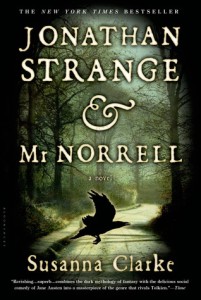 This is one of those books that has been floating around my TBR for quite some time, and I have no clear idea how it landed there.  I don’t distinctly remember reading a review of it, but it seems to be one of those books that I frequently hear referred to in a rather sidelong manner.  And I must say – I don’t really know what to make of this books.  In an odd way, it put me in mind of the Series of Unfortunate Events – a book that somehow isn’t at my level of understanding.  For me, a 2/5 – I can understand why its average Goodreads rating is much closer to a 4/5, but it just isn’t for me.

The book is a rich one.  At over 800 pages, it is a brick of a book, and I honestly dithered about finishing it…  I decided to give it 150 pages to make its case, and although I wasn’t completely hooked  by then, I was engaged enough to want to see where things went.  It’s a slow-paced book that covers a decade of time – a decade in which it genuinely feels like more ought to have happened, but didn’t.

The slow world-building, enhanced by Clarke’s numerous footnotes (more on those in a moment), was impressive.  Clarke builds a true sense of this alternate-reality she has created.  Her interweaving of actual history into her world was very well done.

So why can I not summon up warmer feelings for this book?  I wanted to love this book, truly I did.  But, in the end, it just never quite hooked me.  While many layers of many characters are revealed, I still never felt bonded with any of them.  I could never quite believe in the depth of Strange’s affection for his wife, so the many actions he takes to rescue her felt awkward to me.  The entire ending was rather abrupt (especially for a book of such length), and I felt a little betrayed that (SPOILER SPOILER SPOILER SPOILER) that, after all that effort, Strange and his wife are not really reunited…????

I had very mixed feelings about the footnotes as well.  While I liked them as an alternative to endless explanatory dialogue, they were also more than a bit distracting, occurring as they often did in the middle of sentences and sometimes running on to a page or more in length, entire little stories of their own.  In some ways this was fun, and in other ways  – most of the time, if I’m honest – it was plain aggravating.

By halfway through, I once again felt that I was at a crossroads – should I finish this book??  But I just kept feeling as though something had to happen – that things would pick up – that a plot would suddenly appear – that I would like someone – so I kept on.  Honestly, I regret that decision.  I lugged this incredibly heavy book on holiday to finish the last 200 pages, and then just sat there, staring at the last page, feeling incredibly ripped off.  I don’t usually feel annoyed about books when I’m done with them, but I did this one.

In the end, I think my rather meh feelings towards this book come back to the fact that I didn’t love any of the characters.  They were fine, but I never truly felt bound up in their fate.  It seemed, that with that many pages to tell the tale, there ought to have been at least one person for whom I cherished a sincere affection and concern – but there wasn’t.  Instead, the whole story felt ponderous, heavy, and a bit prosy – Clarke frequently flirted with the line between well-researched and stuffily pleased with her knowledge.

There are many (many) positive reviews for this book, so by no means discard it on my word.  But for myself – I must confess that I don’t really understand the hype surrounding this book that, in my mind, could have been culled down by half quite easily…