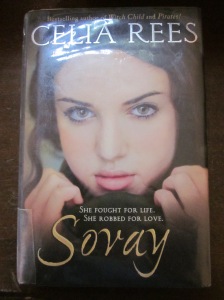 Sometimes I find myself wandering in the YA section of the library and just meandering about.  I usually leave with a few books, some of which end up being epic and brilliant and amazing, and others end up being overly-complicated, overly-dramatic, and over-the-top.  Unfortunately, Sovay is going to fit neatly into the latter category.

For those of you who don’t want to read spoilers, this book is going to get a 1/5.  It was honestly fairly dreadful.  The first 2/3 were at least readable, but by the ending I was actually dreading picking it up, and had to force myself to finish (hoping against hope that some miraculous end would bring everything together…  but no.)

I will say that one of the things about this book that really did irritate me was the constant introduction of arbitrary homosexuality.  Can the highwayman take Sovay to a regular whore-house to find her some clothes?  No, he takes her to a whore house of young boys dressed as women.  There are constant comments about so-and-so being thus inclined, etc.  At one point, Sovay’s brother comes home from Paris and greets her and their old friend, Gabriel.  They’ve grown up together like siblings, we’ve already been told.  Sovay’s maid is convinced that Gabriel has feelings for Sovay, but Sovay isn’t so sure.    This is how the author writes the touching scene of Hugh’s homecoming:

“Hugh!”  Gabriel burst into the room.  “Mrs. Crombie told me you were here!  I can’t tell you how glad I am to see you!”

Gabriel took his friend in a strong embrace and Sovay wondered if Lydia was right in her judgment of of exactly who was the object of Gabriel’s affection.

Really? How is that even vaguely a necessary comment?  How about, Gabriel and Hugh have been life-long friends and Gabriel thought Hugh was dead and he’s not so they’re glad to see each other?  Could that be a possible interpretation to this embrace?  But no, it’s like that the whole way through the book, this constant, nagging, unnecessary undercurrent of homosexuality, and it irritated the bejeebers out of me.

Before the story, there is a poem, supposedly lyrics from a “traditional ballad” about a woman named Sovay who dresses as a highwayman and holds up the carriage in which her fiancee is riding.  She then demands that he hand over a ring, which happens to be the ring that she gave him to prove her undying love.  Well, the dude says that he would rather die than give up the ring, because it was a gift from his truest love, and of course Sovay says that that’s the right answer because if he had given up the ring she would have killed him.

Let’s be honest here: just reading that little ballad was almost enough to prevent me from reading the rest of the book.  Because really?  If someone held up my  husband and demanded that he hand over his wedding ring, I would really rather have a live husband minus a ring than a dead husband still minus the ring because the thief is going to end up with the ring either way.  But I digress.

In conclusion, for those not interested in my ridiculously long and ranty synopsis below:  so many dudes, and yet zero actual romance; so many plot ideas, and yet no direction; so many characters, and yet no conclusions; so many villains, and yet no real triumph from the heroine.  DREADFUL.

(For those who enjoy my rants about books that drove me crazy, and don’t mind spoilers, read below.  :-D Be warned, it’s long, because I really, really enjoy giving a summary of books I didn’t like.  It’s cathartic.)