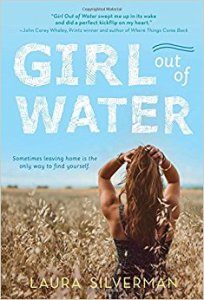 So I recently subscribed to The Book Drop through Bethany Beach Books.  While not the fanciest book subscription box out there, it’s very reasonably priced.  Every month comes with a book that is usually either autographed or included with an autographed plate, and usually some other kind of bookish goody like a bookmark or notecard.  There are four different types of books, and to start with I’ve been getting the YA, although I’ve switched to the Children’s for next month just for fun – there is a slight price variation between the types, but since the subscription is paid monthly, it’s easy to switch between them.

All that to say, Girl Out of Water was my first book.  It definitely wasn’t a book I would have picked up on my own, but it ended up being a much more enjoyable read than I anticipated.  While I’m not keeping this one for my permanent collection, it still was a solid story with a main character I actually liked (most of the time).

Anise, who narrates the story (in present tense, unfortunately), has lived her entire life in Santa Cruz, California, right on the beach.  She loves to surf, and has a solid core of friends.  Anise is 17, and this is the last summer a few of her friends are going to be around, as the group is starting to break apart and head off to college and other post-high-school things.  But Anise’s big plans for the summer are destroyed when her aunt, a widow and mother of three, is in a serious car accident.  Anise and her dad have to go to Nebraska to help take care of the kids and Aunt Jackie.  While there, Anise of course learns a lot about herself, mainly because of a boy, and at the end of the book is a wiser and more mature Anise than she was at the beginning of the summer.

A lot of this book was quite predictable, but I still found myself engaged in what was going on with Anise and her life.  Anise’s mother is a flighty, crazy woman who has been in and out of Anise’s life since she was born.  The mom is completely unreliable – Anise and her dad don’t even have a way to get a hold of her to her know about Jackie’s car accident.  Anise lives in fear that she’ll end up like her mom, and a lot of her actions revolve around this fear.

My two biggest problems with this book:  the first is that Anise is just way, way too melodramatic about the fact that she isn’t home for the summer.  Like I was totally on board with her being  homesick and upset, but she also acts like her friends are legit going to forget who she is, and that these “missing months” will mean they no longer have any common ground.  Hello?  You’re gone for like eight weeks, not the rest of your life…??  It just seemed like she blew the situation incredibly out of proportion, and all of her other problems stemmed from that.  However, I do have to say that I really liked the way that Anise didn’t spend a lot of time complaining about her situation – I really appreciated how she put a high priority on her family and helping with them, and overall seemed pretty mature about the importance of this responsibility.

The second big issue I had with this story is that Anise has already decided to go to a local college because she doesn’t want to move away from home.  I thought that was totally fine – what I didn’t like was how everyone acted like that was a stupid choice, and that she was strange and unnatural for not wanting to leave home.  She lives with her dad who dotes on her and she has everything she could possibly want??  Like why would people think it’s weird that she wants to stay home?  I think everyone is ready to leave at different times, and have no doubt that in a year or two Anise will begin to see how life changes and that moving away isn’t the end of the world, but I don’t think it’s right to pressure teens into going away to college just because “everyone” does it.  It felt like there was a really strong message that you HAVE to leave home to go to college or there is something wrong with you, and I didn’t like that.

And I guess there’s also a third thing – a lot of swearing.  I’m just not into it.  I don’t like this effort to normalize f*, and it appears a lot in this book as a total “this is just how teens talk these days” kind of way.  I’m old-fashioned, I guess – I don’t like it.  Constant swearing is pretty much a great way for me to drop at least half a star when I think back on my feelings about a book.

The love interest, Lincoln, was a little too something.  I mean – he’s black, adopted, and only has one arm??  This seems like a lot of minority issues to put on one character.  He was totally likable, but Silverman kept emphasizing these three things about him, which made him come across more as a representative of something instead of just as a person.  Plus, it felt weird because they both act like there is no way this relationship is going to work out long-term so…  just make-out buddies, I guess??  It seemed strange to emphasize the transient nature of their relationship while also acting like it was a really serious one.

Finally, I wanted Anise’s mother to actually show up.  So many of Anise’s issues seemed like they could have been resolved or at least partially resolved by a good hashing-out now that Anise is actually making some decisions about her mom/learning new things about her/learning new things about herself.  The ending of the book felt kind of vague and off-kilter, and I think that was part of the reason – several things like that felt kind of unresolved.

All in all, Girl Out of Water wasn’t a horrible read.  It made me roll my eyes a few times, but Anise herself was a really likable character, and that made me stick with the story even when it got a little ridiculous.  I’m passing this book on to the next reader and not particularly recommending it, but it was still an easy 3/5 and one of those YA books that would probably be better enjoyed by its target audience.