Greetings, friends! Here I am with more reviews from the way-back. Let’s see how good my memory/notes happen to be!! 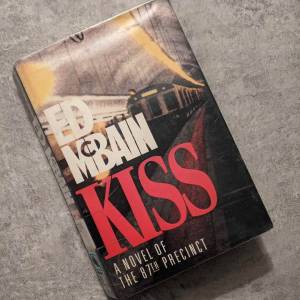 Yes, I’m still working my way through this series. There are only (!) 55 books so I have two batches left!! This group, comprised of five one-word-title stories (Lullaby, Vespers, Widows, Kiss, and Mischief) were a 3.5* average group without anything especially outstanding.  My favorite was Kiss, and my least favorite was Lullaby.  In a weird way, Mischief was the most disappointing, though, because the Deaf Man was the returning villain and it was definitely the worst Deaf Man story yet – jumbled and overly complicated.  This batch (published 1989-1993) continued the trend of weird sex situations, which I find rather bothersome.  Hopefully, as the books move into the 90s, we’ll get over the 80s everything-is-sex motif.  Still, I’ve developed a huge soft spot for the detectives of the 87th and will be a little sad to bid them farewell when I get to book #55. 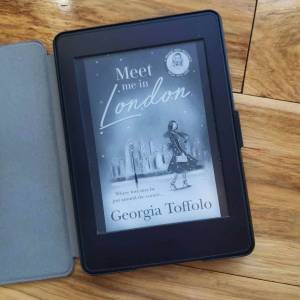 I’m always a sucker for a fake relationship trope, and while this one wasn’t anything groundbreaking, it was a nice palette-cleanser in the midst of the gritty 87th Precinct books.  I really appreciate modern romances without explicit sex scenes, so that bumped this one up a little in my ratings even if it was a little slow in spots. 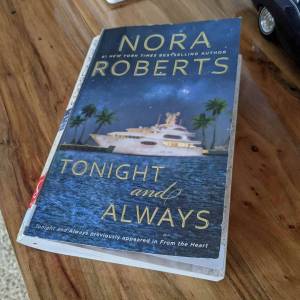 It’s rare that I’m disappointed by Nora Roberts, but this was one of those times.  This book was just SO 80s.  The drama was over-the-top, the hero was ridiculously brooding and macho, the heroine was ridiculously independent, several borderline-rapey scenes where the hero grabs the heroine and kisses her into submission, and I spent most of this book just rolling my eyes.  The concluding drama genuinely infuriated me (hint: nothing makes me more angry then women who get pregnant and decide it’s “for the best” to not tell the father), and this is one Roberts book I don’t ever see myself revisiting.

If I Never Met You by Mhairi McFarlane – 4* 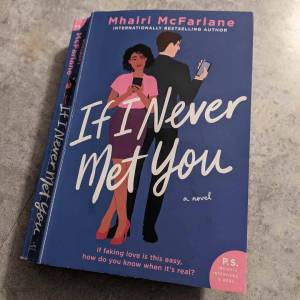 McFarlane is one of those authors I keep meaning to read since I’m always on the lookout for good romcoms.  I decided to choose this one for my contribution to the next round of the traveling book club.  In the end, I did enjoy this one a lot, but it definitely was more of a novel than a romcom.  It’s one of those books that while I did like it a lot, I’m going to end up talking about the negatives more than the positives, but you’ll have that haha

So basically the main character, Laurie, is devastated when her live-in boyfriend not only breaks up with her – but announces that his new girlfriend is already pregnant.  Because they also work together, Laurie has to see Dan/hear about his new family on the regular.  Through a series of events, she agrees to a fake relationship with another coworker, Jamie, with a convoluted plan of staged pictures and social media posts.  Of course, this is romance, so eventually the fake romance turns into a real one, and everyone lives happily ever after.

The problem with this book is that Laurie and Dan had been together WAY too long to make this a fun and fluffy romance – almost 20 years!  So the majority of the book ended up being about Laurie working through the grief of having such a long-term relationship fall apart, which meant loads of flashbacks to their relationship throughout the years.  I felt like this book was a lot more about Laurie and Dan than it was about Laurie and Jamie.  It gave the whole story a really down tone and also meant it felt incredibly unrealistic for Laurie to be into Jamie so quickly.  McFarlane would spend pages telling us about special moments between Laurie and Dan, about the many times Laurie knew that Dan was “the one,” etc. – but then we’re supposed to turn around and believe that Laurie and Jamie are the ones with something special between them.  The whole book would have been so much more believable (and enjoyable) if Laurie hadn’t been with Dan for so long.  As it was, I was almost uncomfortable with her getting with Jamie so quickly, despite the fact that I shipped the two of them and thought they were a great match.

The overall tone of the book also tends to be really sexist against men.  There were a lot of one-off sentences basically dismissing men as sex-hungry neanderthals, and Jamie and his dad are the only two decent guys to make an appearance.  Literally every other male in the story is a total dick.  Laurie also spends loads of time whining about sexism at work and how the men have it easy and the women have it hard yadda yadda yadda despite the fact that her (male) boss is constantly telling her what an awesome employee she is, frequently stands up for her against anyone who says anything remotely negative about her or her work, brags about her to everyone, and recommends her for promotions.  I just couldn’t really buy the “oppressed woman at work” story when Laurie wasn’t remotely oppressed!  A lot of Laurie’s “problems” came across that way – I realize she’s at a low point in her life, but she’s also just so whiny about everything.  It’s hard to empathize with a character who is successful, makes good money, has a boss who respects her and treats her well, has good and supportive friends, and spends all her time whining about how hard her life is.

BUT despite all that I actually did enjoy this book haha  The parts with Laurie and Jamie were SO fun, their banter was fantastic, and they had great chemistry.  I loved the random set-ups they created, and loved watching them both get over their initial prejudices against each other and come to appreciate the other.  I really wish this book had focused more on the two of them and LOT less on Laurie and Dan and the way their relationship failed.

I’ll definitely be checking out more of McFarlane’s books, and if you don’t mind your romances a little angsty, there’s a lot to enjoy with this one.