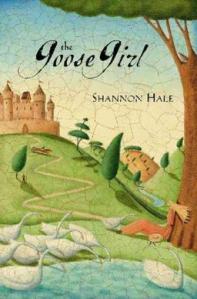 The series begins with The Goose Girl, and is a retelling of the fairy tale by the same name.  Growing up, I always found this fairy tale to be particularly intriguing – there are so many just plain weird elements: the blood-stained handkerchief, the talking horse head, the gruesome punishment of the villain.  Hale’s retelling is the only one I’ve read that incorporates all the weird elements and makes them into a story that makes sense.  It’s honestly one of the best fairy tale retellings I’ve read, period.  She does an amazing job fleshing out the original into a thoroughly engaging full-length story.

It’s also a book that completely works on its own – and doesn’t feel like it is leading into a sequel at all, yet when I started Enna Burning, it was as though Hale had gone back and gently teased some threads loose from the first book so that the second could flow naturally from it.  Enna’s story takes us into more of the culture and magic of Bayern.

River Secrets is the only book that focuses on a male protagonist, and since Razo is one of my favorite characters in the whole series, I thoroughly enjoyed it.  There’s also a bit more of a mystery to this story.  And again, even though Enna felt complete in and of itself, the third book follows a natural flow and answers questions that I didn’t even know I had at the conclusion of Enna.

The final book feels, in many ways, as though Hale is tying up the loose threads of her world-building almost as much as the threads of her characters.  Throughout the series, she has introduced the readers to a world where certain people are born “with a word on their tongue” that allows them to speak different languages – wind, water, fire – and people.  People-speaking is an inherent ability to be convincing, to persuade people to do whatever you want them to do, a seductive and corrupting power.  In Forest Born, Hale circles back around to people-speaking, and brings together a story about choosing to do what is right that is excellently told.

Throughout the entire series, the theme seems to be able balance.  If we allow ourselves too much power in any one direction, it can destroy us.  The key is finding balance and rhythm that allows us to live fully.  It’s a message that resonates with me, because I see a lot of people around me who are out of balance, or who are trying to live in a season that isn’t happening right now, instead of embracing who and where they are in life.  That kind of life of small discontent eats away at our happiness and peace.

While these aren’t perfect books, they are easy 4.5* reads for me.  If you enjoy fairy tale retellings, and fairy tale-esq stories, I definitely recommend these.

In this fourth and final (so far anyway) book in the Bayern series, all of our favorite characters are back.  However, this story focuses on Razo’s youngest sister, Rin.

This is my favorite of the Bayern books, actually.  I love the way that Hale addresses the idea that Dumbledore famously presents to Harry–“It is our choices that show what we really are, not our abilities.”  In this book, Rin has abilities that could very easily be used for evil, but she chooses to work for the good.

Forest Born is a 5/5 for me, more details on that opinion below, complete with some spoilers–