Turns out that this month’s minireviews are also my first few #20BooksofSummer reads!!  Of course, I ended up posting the review for Swallows and Amazons, my fifth read, first, so I’m out of order as usual! 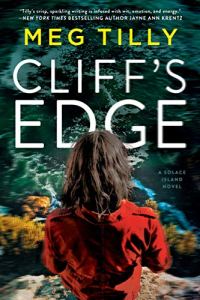 A while back I read Solace Island, which I found to be a decent, if not stellar, read.  It was good enough to intrigue me to read the second book, Cliff’s Edge, which was just published this spring, mainly because I really liked Maggie’s sister, and she was the main character of this book.

All in all, I had a lot of the same problems with Cliff’s Edge that I did with Solace Island.  Both books are labeled as romantic thrillers, but both were a lot more romantic than thrilling.  And, in my mind, both would have been a lot better if they had been written as straight romances.  In this book especially, the thriller aspect of the story definitely brought down my overall enjoyment and rating of the book, as it always felt clunky and stilted, and mostly consisted of brief chapters of Eve’s stalker lusting after her and being sexually aroused by the thoughts of what he would do once she was in his power… ugh.

The romance part, however, was great fun.  Eve and Rhys have great chemistry (although I could have done without the sexy scenes) and it felt like they each had a lot to offer the other.  But while I enjoyed that part of the story, it just wasn’t enough to bring the overall rating of the book any higher.  I don’t really see myself pursuing any other books that appear in this series. 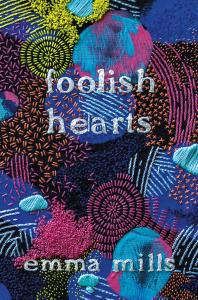 My second read for #20BooksofSummer, Foolish Hearts was everything I’ve come to expect from an Emma Mills book.  The characters were likable and snarky, the angst level felt realistic, and the main character had a family that loves her, with parents who actually like each other!  I really liked Claudia overall.  In some weird way she reminded me of Lincoln from Attachments, I think because Mills did a great job of letting Claudia’s character growth be natural.  In the end, Claudia still was playing her goofy video game and still had her awkward sense of humor, yet she had matured as a person.  It was the same with some of the other characters, Iris in particular – like Iris didn’t suddenly turn into this warm, bubby person.  Instead, she simply began to acknowledge that sometimes showing love means stepping outside our comfort zones for the person we love.

This wasn’t a perfect book by any means, but honestly I think Emma Mills is everything YA ought to be – funny, gently thoughtful, and not full of sex.  She creates characters – even secondary ones – that I like and care about.  She hasn’t written very many books, so I think First & Then is sadly the only one I have left to read.  Hopefully she has something else in the works.

Stephanie’s reviews are the ones that first brought Emma Mills to my attention, and you can read her review of Foolish Hearts here.

This was a YA story that had a fun concept, but it just didn’t play out well at all.  For Alice’s entire life, she’s had a constant character who has appeared in all of her dreams – a boy named Max.  Alice feels like she knows Max better than anyone, after all of the adventures they’ve shared.  When Alice and her dad move to Boston, Alice is stunned to see Max – a real, live, actual Max – at her new school.

The premise presented this as a thing where other parts of the dream worlds were starting to merge in the real world and all this stuff blah blah blah, but what followed was a really disjointed story that didn’t seem to know where it wanted to go, and didn’t do a particularly good job of getting there.  Max himself was completely annoying, since he couldn’t seem to decide if he wanted to acknowledge Alice or not, plus he was dating someone else in real life, so he basically is cheating on this other girl with Alice, which I found completely unacceptable.  Meanwhile, Alice makes friends with another guy at school, Oliver, who was like a thousand times better than Max on every level, but Alice kind of treats him like trash because she’s so obsessed with Max.

The actual dream-part of the book is just SO poorly done, to the point that it makes no sense.  For instance, Alice and Max both act like they aren’t in charge of what happens in their dreams, just like real dreams.  So they don’t control where they go or what happens, yet apparently they DO control what they say?  Alice goes on and on about how she knows Max is funny and adventurous and thoughtful because that’s how he is in her dreams – except I thought they had no control over what happened in dreams??  So why would dream-Max be the “real” Max? There were just a LOT of logic-loopholes in a book that was overall very disjointed and uneven.

This was my #3 read for #20BooksofSummer.

A Noise Downstairs by Linwood Barclay – 3.5*

My fourth #20BooksofSummer read was my first Linwood Barclay book, and actually is another book I added to the TBR because of Stephanie’s recommendation!  Her minireview of this title really captures a lot of how I felt about it – the rather unexpected ending wasn’t exactly what I wanted to have happen, but it was ballsy and Barclay more or less made it work.  However, there are times that I am reading a thriller and the book just goes what I consider to be one twist too far.  A twist really only works if it makes sense, but sometimes authors want to add just one more “What?!??!” moment, and are willing to sacrifice credulity to get there.  This was one of those times – while it mostly made sense, it felt like a lot more of a stretch than I wanted it to.  I felt the same way when I read Before She Knew Him by Peter Swanson earlier this year.

Still, I would definitely be into trying out another of Barclay’s books, especially since there are about a million of them.  Any suggestions on which one should be next??