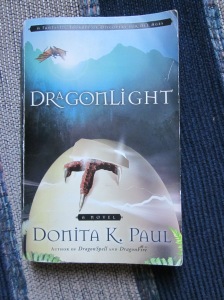 And here is the final installment of Paul’s Dragonkeeper series.  I found these books moderately enjoyable overall – I really, really wanted to like them, but I found myself liking the concept of them far better than the execution far too much of the time.

In Dragonfire, Wulder’s followers were able to defeat the enemies and bring peace to the land.  In Dragonlight, the country is attempting to embrace that peace and establish the new normal.  Unfortunately, the citizens of the country are soon to learn that evil does not have to come from outside influences.

Like I said, I really wanted to like this series, and especially this final book, but, per usual, I felt like the story created way more questions than it resolved.  First off, the meech dragons.  I don’t get them.  They give me the weirds – they’re dragons who can walk and talk like humans, but are still dragons??  They are completely intelligent but not considered a high race??

Gilda is a meech dragon whose character has been completely up and down; she’s switched from villain to heroine to just plain obnoxious far too many times; her character wasn’t developed so much as it was muddied at every turn.  I spent the whole book just wanting to throttle her, and having no idea why anyone else was acting like what she was doing and saying was fine.

We get this random group of heretics who just sort of show up and start misleading people, and it’s never really resolved satisfactorily – I mean, yes, they find the ringleader and bring him to justice, but in the meantime – you’ve redistributed people’s property and children and not really explained how it’s all going to go back, not to mention the implication that the elderly were being put to death by this group – that never really go resolved, either; it was more of just a throw-away oh-hey-by-the-way kinda thing.

There’s this giant evil dragon whose been sleeping for centuries but suddenly just happens to wake up and everything time he moves he sheds scales and these scales turn into these little evil dragons blah blah blah, well these tiny evil dragons keep attacking Kale, presumably because she’s the Dragonkeeper but…  we never find out why??

Kale gets pregnant, and suddenly we find out like all these vague rules about how o’rants have babies and stuff that are never really explained and it’s like she just made up these gestation rules so she could make it all fit into her story (something like they get pregnant but the pregnancy doesn’t really REALLY start until she’s relaxed and exposed to new places or something and then the baby grows really slow so you don’t even know she’s pregnant until the very end and then it goes super fast and then something special has to happen for her to actually have the baby or something????)

We’ve got an apparently ageless little kimen who I guess Wulder just made her stay the same age for a while because bad stuff happened to her when she was a kid so he kinda froze her age and then put an egg of truth in her???

There was just too much.  I felt like Paul really wanted to make this big point about how Truth was the most important thing, but she did it in this very convoluted and complicated manner, and having an actual rock/egg thing BE Truth seemed clumsy.  Too many of Paul’s attempts at analogy are far too obvious to be a good analogy; I just feel like the concept is being shoved in my face instead of pleasantly slipped into my drink to be swallowed and contemplated later.

A 3/5 for this series as a whole.  I’ve heard other people really enjoy these books and rave about Paul’s world building, but her style just wasn’t mine.  The stories had a lot of potential, and I liked a lot of the characters, but overall things were just overly complicated and too aggressively spiritual to be my style. 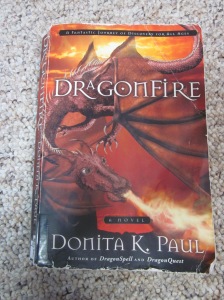 Having finished this series now, I can definitely say that Dragonfire, the fourth book, was by far my least favorite of the five.  While I had rather ambivalent feelings towards the first two books (and the last, as we shall see later), and thoroughly enjoyed the third, Dragonfire was a disappointment.

First off, it takes place several years after the close of Dragonknight.  In that book, Bardon thought a lot about Kale, and sometimes even thought about his feelings for her, but Kale herself didn’t appear until towards the end of the book.  When she did, Bardon was still uncertain of what their future should look like, but it was obvious that romance was very possible at some point.  Then, suddenly, in Dragonfire they’ve been married for several years.  All of Paul’s books feel like they’re starting in the middle (I’ve spoken before about her irritating habit of dropping the protagonist into a potentially fatal situation within the first ten pages of every book), but Dragonfire far more so – far too much  has happened since we met all these characters last, and left me feeling emotionally detached from everyone.  Then, Paul separates Bardon and Kale by having them sent on separate quests.  Both of them are quite distraught about this, but it really felt hollow because they were separated throughout most of Dragonknight, too, and we’ve not had a chance to see them working together as husband and wife.  They go on and on about what an amazing connection they have and how they’re able to do all this great stuff together, but it’s all just secondhand news.

The other books have all had a bit of a weakness about villains and their destruction, but Dragonfire takes the cake.  It all feels very aimless, and the threat doesn’t feel threatening.  Per usual, everything just sort of fizzles out in the end anyway.

And finally, something that’s really annoyed me throughout the whole series, but especially in this book – the whole concept of high/low races vs. random creatures.  There are no rules!  I mentioned some of the different races and creatures in my post about the first two books, and I guess what’s confusing to me is what exactly constitutes a “race” versus what constitutes just an animal.  All the so-called “high races” are definitely human-like in the sense that they are thinking, feeling beings who speak a common language.  Out of the theoretically-seven-but-I-count-eight “low races,” this isn’t always true.  Some of them, like bisonbecks and ropmas, are thinking beings, and are even capable of becoming followers of Wulder (the god in this story).  Others, like blimmets and druddums, just seem to be animal-like.  They have no spoken language or any kind of culture.  This lack of definition made things rather confusing, as Paul attempts to change the theology of her fictional country.  She initially said that the low races had been created by the Pretender, but then we’re told that the Pretender can’t actually create; only Wulder can, so the low races are actually creatures that the Pretender has twisted for his own evil purposes.  But this still doesn’t explain why druddums aren’t just animals – some of the non-speaking low races are destructive, yes, but others (I forget which one) just lives in caves and they run around and run into people but never really attack them or anything, so why are they a low race instead of an animal??  I can’t explain why this is annoying to me, but it is.  Maybe it’s because it’s just an illustration of how I felt like Paul was making up world-rules as she went along, and attempted to hide the fact by keeping things super confusing.  Truly excellent fantasy writing can create a complicated world in a simple, understandable way.

Overall, Dragonfire felt like Paul was trying too hard to force rules and characters to work in her story, instead of letting it grow naturally.  It’s mostly frustrating  because I feel like her world has a lot of potential.  2/5. 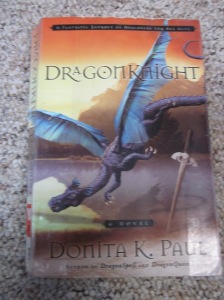 Greetings, friends!  First off, just a moment of self-advertisement – I started a new blog!  For most of you, it probably won’t hold much interest, but I thought I’d throw it out there anyway!  :-D  My husband and I really enjoy taking hikes and exploring, and we’ve started recording our adventures.  Not a lot of beautiful scenery in February Ohio, but still!  Good times, good times.

Anyway, the book!  Dragonknight is the third of Paul’s Dragon Keeper books, and it was (so far; I haven’t finished the last one yet) my favorite out of the batch.  While the first two books focus on Kale, the dragon keeper, this installment is mostly about a character we met in the second book, Bardon.  Bardon aspires to become a knight, and has been training as Sir Dar’s squire over the couple of years since we last visited Amara.  At the beginning of the book, he’s setting off to spend several months in seclusion, to rest and pray, etc., before coming back to take (or not take) his final vows and become a knight.  Unfortunately, when he arrives at the supposedly-empty cottage where he is supposed to stay, it’s already occupied by a pair of emerlindian women who are starting on a quest of their own.

I’m not sure why I enjoyed Dragonknight more than the other books in this series.  It may be that I found myself relating to Bardon, who was doing his best to follow the rules and do what he was supposed to, but was constantly being saddled with more responsibilities, and soon found himself leading a ragtag group of individuals who never seemed to really grasp the seriousness of the situation.  It could also be that I am somewhat tired of the whole concept of “mind speaking,” which seems to suddenly be in every single fantasy book I read.  Since Bardon isn’t good at mind speaking, there isn’t as much of it in this book, which I thought was great.

The downsides were, as usual, Paul’s irritating habit of throwing her characters into mortal danger BAM! right in the first chapter.  WHY!??!!?  I find it just irrationally annoying that she seems to think that she has to “hook” us into the story by immediately having someone getting attacked, usually by some creature we’ve never even heard of before, and that she doesn’t really bother to explain, so I already have to flip back to the glossary within the first five pages just so I can truly grasp the horror of the situation.

The second major downside was, also per usual, the end of the book (I’m realizing that she’s really pretty good at the middle stuff, but lacks the ability to begin and end her stories strongly).  We spend the entire book building up this big crescendo, and then it all kind of just fizzles out.  In this book, they literally come across the Pretender himself (basically, the devil) and have this big conversation and then…  apparently he just kinda wanders away???  It’s just very unsatisfactory.  I don’t know if Paul doesn’t like to write battle scenes, or if she really just doesn’t know how to get rid of villains, but she does it poorly every time.

Still, this was definitely my favorite out of the bunch – the middle bits were pretty solid!  4/5.