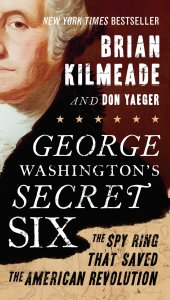 Regular readers of this blog will know that I quite enjoy nonfiction that focuses on something random and/or obscure.  While it’s always good to read a history book that is sweeping in its coverage in order to get a big picture idea of what is happening, it’s also quite fun to focus a magnifying glass on something specific and really delve in.  This is what Kilmeade and Yaeger have done in this book by focusing on the spy ring George Washington established in New York during the American Revolution.

I quite enjoyed this book, which was easy to read and completely engaging.  The pacing was excellent, and I found myself reading it as anxiously as I would a modern thriller.  Despite the fact that I know that Benedict Arnold did not succeed in his ploy – I was still somehow on the edge of my seat!

The British occupied New York City and environs during the overwhelming majority of the Revolution.  A key port and a critical location in the middle of the colonies, Washington needed to know what was going on inside of the city and in the area surrounding it.  The authors do a great job of explaining what was going on, why Washington needed the spies, and how the spy ring was established – including initial failures.

I really loved the way the book started – the preface of the book is actually about a man named Morton Pennypacker, a historian in the 1920’s, who desired to learn the names of Washington’s six New York spies.  Because yes, at that time only the names of four of the individuals had been established.  Talk about some serious secret activities!  The name of spy #5 was discovered virtually by accident when Pennypacker received some letters dated just after the Revolution – and recognized the handwriting!  Even today the identity of spy #6, a woman, is unknown.

All in all, while this wasn’t a book of great depth, it did a great job introducing the Culper Spy Ring and putting into context.  4/5 and recommended.