In this installment of her Chrestomanci books, Jones goes back in time.  Her earlier books (Charmed Life and The Magicians of Caprona) have the same Chrestomanci (which is a title, or office, not a proper name), Christopher Chant.  In this book, we learn much more about Christopher’s childhood and how he came to be Chrestomanci.  I’ve had several people tell me that this is their favorite of the Chrestomanci books, and I have to say that I really enjoyed it.

Per usual, Jones is brilliantly creative.  The entire premise of the Chrestomanci books – that there are many parallel worlds, created whenever a major decision could have gone two different ways (one world for each way the decision could have gone) – is fantastic.  It gives her so much freedom to have a world similar yet slightly different to ours.  Throughout the entire book, I found myself constantly being surprised by yet another intriguing premise (in a good way).  The story moves right along.  Even though this is the first book chronologically, I am trying to read them in published order (although I somehow accidentally skipped Witch Week, whoops!), and I do think that Christopher Chant was more enjoyable and interesting because I had read two of the other books (and actually several short stories from Mixed Magics, which I haven’t reviewed yet, as well).

Negatives for me are similar to what they usually are for Jones.  First off, she very rarely writes a good adult.  And I don’t mean “good” in the sense of “well-written” – I mean good – an adult who is unselfish and actually cares about the children in the story.  She pretty consistently writes adults who are self-centered and who use the children around them to further their own ends.  After a while, this begins to wear on me.  These are books written about children, for children, and I feel that the constant message that no adult is to be trusted really isn’t a positive one in the long run.  In Jones’s books (the ones I’ve read, anyway), children are brilliant and clever and adults are bumbling and silly at best and selfish and cruel at worst.  And while I realize that this is part of the appeal of her books for many younger readers, it just isn’t true and I don’t think it’s a healthy message.

My second negative is that, sometimes, I feel like she crosses a line into something rather gruesome.  For instance, early in the book, young Christopher meets and befriends some mermaids.  We don’t really learn their names or anything like that, but we know that they talked with him and were obviously intelligent beings.  Later, we find that these mermaids have been murdered and harvested for their parts (!!!!!) and that just seems a bit extreme to me.

But still, overall, I loved this book – it was exciting and interesting, and I loved the way that it tied into other aspects of the Chrestomanci series (especially the Goddess!).  A fun, solid read – 4/5.

In this next installment of the loosely-connected “Chrestomanci” series, Jones takes us to an AU Italy:

The World of Chrestomanci is not the same as this one.  It is a world parallel to ours, where magic is as normal as mathematics, and things are generally more old-fashioned.  in Chrestomanci’s world, Italy is still divided into numbers of small States, each with its own Duke and capital city.  In our world, Italy became one united country long ago.

The story, with a Romeo and Juliet undertone, focuses on two great magical families in Caprona:  the Petrocchis and the Montanas.  Generations ago, a rift occurred between these families, and they have been bitter enemies ever since.  With the rise of an evil magic, the two houses must decide whether or not they can set aside their differences.  The great Chrestomanci may be the only one who can make them see how necessary it is for them to work together.

This book’s storyline seemed to hang together much better than some of Jones’s other books I’ve read in the past (or maybe I’m just getting more used to her writing style).  I greatly enjoyed the large and boisterous families.  Excitable, noisy, and fiercely loyal, she wrote about them in a way that easily created a background of a family even larger than the specific individuals of the story’s focus.

To Tonino, reading a book soon became an enchantment above any spell.  He could never get enough of it.  He ransacked the Casa Montana and the Public Library, and he spent all his pocket money on books. … And the best book would be about the unimaginable situation where there were no spells.  For Tonino preferred fantasy.  In his favorite books, people had wild adventures with no magic to help or hinder them.

Such a simple twist of ideas, a world wherein “fantasy” books mean the characters have no magic, but brilliant.

The villain of this story was honestly quite a bit terrifying to me, someone just so ruthless and cruel.  But that, combined with the fact that Jones actually has no compunctions about killing off anyone and everyone in her stories, added quite a bit of zing to the story.

Overall, I really enjoyed The Magicians of Caprona.  The Chrestomanci books are shaping up to be some of my favorites of hers, and I am looking forward to reading the rest.  4/5. 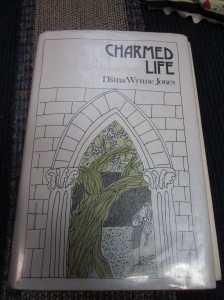 So I’m afraid that my reading (and thus this blog) has been in a bit of a rut lately …  frankly, I’ve cheated a bit on my usual rotation because I’ve been enjoying the Amelia Peabody books so much that keep skipping over the boring looking books so I can get to the next Peabody story!  That, combined with the fact that I’ve also read several Pride & Prejudice variations/sequels that were so dreadful/fanfictionish that I’m embarrassed to admit that I’ve read them, means that this blog has been a tad repetitive.  And while that trend will likely continue (because let’s face it, I read basically the same types of books all the time), I’ve branched out a bit by starting Diana Wynne Jones’s “Chrestomanci” series.

This is a series that I’ve been meaning to read for quite some time (pretty much every since I found out about Jones about a year ago when I read Fire & Hemlock).  The problem is that everyone seems to have a different opinion on the order in which the books should be read.  Some people are adamant that they be read chronologically.  Others are just as determined that they only be read in published order.  Some people are ambivalent, saying that they can be read in any order – except you have to read X first (there are multiple opinions one which book X is).  I just couldn’t decide how to do it!

In the end, I ran into someone on tumblr who convinced me to go with the published order, mainly because we got into a passionate discussion about the injustice of the Chronicles of Narnia being republished in chronological rather than original published order; we agree that this is a terrible, terrible decision, and we both spend time thrusting The Lion, the Witch, and the Wardrobe into people’s hands and demanding that they read it before reading The Magician’s Nephew no matter what the numbers on the spine say.

ALL THAT TO SAY that Charmed Life is the first-published of the Chrestomanci books, and so I read it first.

The other problem I have with reading/reviewing Jones’s books in general is that she has an almost cult following.  I’ve discovered over the years that I’m simply not clever.  I read books and more or less take away the actual story from them.  But extrapolating theories and making insightful and subtle connections – not my thing.  (Case in point: I have been mocked by multiple people online for my personal indifference towards the A Series of Unfortunate Events books.  I just didn’t “get” them.  No one ever bothers to explain what it is that I haven’t gotten, but I’m apparently incredibly obtuse for not getting what I’m supposed to get, because while I appreciated the intriguing writing style, the point of those books is just beyond me.)  So sometimes, while I enjoy Jones’s stories and characterization, I find her endings a bit abrupt and disappointing.  But I’m scared to say so because the entire We-Love-Diana-Wynne-Jones-Club jumps all over me for my inability to “get” her writing (tumblr, I’m mostly talking to you).  Ah well.  I guess what I’m saying is – reading is about opinions and is incredibly subjective, so if I decide I do or don’t like one of Jones’s books, please don’t let that take away from your ability to enjoy (or not) what she’s written.

Wow, this is a really long entry that, thus far, hasn’t actually reviewed a book!  Gracious.

So.  Charmed Life.  It was a good book and I liked it.  I found Gwendolyn to be above-and-beyond disturbing.  She gave me the legit creeps, and while I could somewhat understand Cat’s love for her, since she was his sister, etc., I couldn’t really understand why he continued to yearn to have her back even after discovering how she had used and abused him.  Consequently, Cat kind of got on my nerves.

The concept, however, that every time there’s a major battle or decision or whatever, that another world is created that has the opposite result, so that there are multiple worlds all similar yet different – I love that idea.  It’s perfect, and it gives Jones the ability to write about a world that is a lot-but-not-exactly-like our own.

Overall a strong 4/5, and I’m really looking forward to the rest of the series (I’ve only read The Magicians of Caprona so far).