This was one of those random books that GoodReads recommended to me.  While the overall premise of the story was excellent, and the pacing was good, I just couldn’t really get attached to the characters as individuals.  An overall 4/5, but a low one – this was a book that was very close – I honestly originally listed it as 3/5 until I started writing the review and remembered all the things I really liked about this story!  I just really wish that I could have been more emotionally vested in the characters Belfoure created. 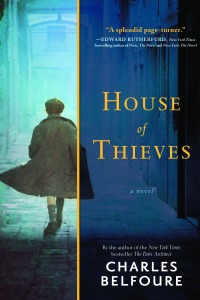 It was a perfect day to rob a bank.

Our setting is New York City in 1886.  After reading so many books set in England around this time, it was interesting to be back on my own side of the pond for once.

John Cross is a respectable man who works as an architect.  He has a wife and three children.  George has just graduated from college; Julia is getting ready for her grand entree to Society, and Charlie is a scamp around ten.  John’s wife, Helen, is well-known for being beautiful, gracious, and intelligent (but not too intelligent, of course), and if she and John aren’t particularly close, well, no one expects married people from their class to actually be friends with each other.

In short, Cross is a perfectly normal man, spending his days designing buildings for the rich, his evenings attending social functions, and all of his time making sure that no one in the family does anything to bring disgrace upon them.

The problem is, Cross has no idea that his entire life is about to turn upside-down. Turns out, young George has a very serious gambling problem, one that has led him to rack up tens of thousands of dollars in debt to a sophisticated crime boss named James Kent.  When George can’t pay up, Kent kidnaps him and plans to kill him – until he realizes what George’s father does for a living.  The wheels in Kent’s head begin to turn, and he pays Cross a little visit.  Kent tells Cross that Cross must use his inside (literal) knowledge to help set up robberies in the homes of various rich people, banks, clubs, etc. in order to pay off George’s debt – or else George (and probably the rest of the family) will be killed.

It’s a brilliant concept, really.  Cross admits to himself that he’s a bit of a coward – he paid someone else to fight in his place in the recent Civil War – and he hates every moment of planning the crimes.  But Kent is deadly, and Cross knows he has no choice.  As the book progresses, Cross still hates Kent and what he represents – but he begins to take a bit of professional pride in his plotting.  I loved the robberies – some of the ideas really were quite fantastic, and it had this sort of Ocean’s Eleven feel to it.

The story is interspersed with random scenes from the lives of the rest of Cross’s family.  At first, the bits with Julia getting ready for her big “coming out” ball seem completely dull and irrelevant, but Belfoure is playing a long game with the family, and about a quarter of the way into the story, I could start to see how things were coming together, and it was fantastic.  Things really get interesting when Cross’s brother, a Civil War hero (and one of Cross’s heroes, as well), returns to New York with a new job – working as a Pinkerton.  His first big assignment?  Investigating the rash of robberies that all seem to be being orchestrated by a man known as The Engineer.

Speaking of which, one of things I did like about Cross was his genuine enthusiasm for architecture.  Belfoure doesn’t overwhelm us with details – just enough to make us really interested in what Cross is actually doing.  I quite enjoyed the architectural references throughout.

Belfoure never really tries to convince us to like Cross.  He’s rather a weak and passive person, who is just sort of letting life take him where it will.  I liked seeing Cross develop some backbone throughout the book, and actually step up to take charge by the end.  The way that Belfoure brings the entire Cross family together is also really quite fantastically done.  I also loved the epilogue.

Still, the characters somehow came across rather stiff and wooden, and I couldn’t quite believe in them as real people, even when I wanted to.  While I was interested in the story and seeing where it went next, I didn’t really feel that much attachment to any of the individual characters.

I also felt like Belfoure spent just a little too much time dwelling on the utter uselessness and emptiness of the lives of all society people – at some level, yes, that’s true.  But was there really not a single person in that entire class who did a single worthwhile thing with their life?  Belfoure basically tells us that they were all (ALL) empty-headed ninnies, and I just couldn’t quite get behind that message.

In a way, it kind of reminded me of Longbourn, with this constant emphasis that the upper class if full of silly, empty-headed, foolish people, while the lower class is full of REAL people who know what life is REALLY about, and so somehow it ended up sounding like Belfoure was trying to convince me that betting on how many rats a terrier can kill in two minutes is somehow more worthwhile than going to a fancy ball, and I just wasn’t buying it.

So, to sum up – the story was excellent; the pacing was spot-on; the characters were meh; and the societal commentary was aggravating.  I think I’m sticking with the 4/5, and have added Belfoure’s earlier book, The Pairs Architect to the TBR.