Maggie Stiefvater is one of the few authors that I just really like and enjoy as a person (honestly I usually try to find out as little as possible about authors; I just want to enjoy their writing, not analyze their personal belief systems), and I loved the Wolves of Mercy Falls series, despite being definitely in the angsty YA paranormal genre (not my usual wheelhouse) as well as The Scorpio Races.  The Raven Cycle has been on my TBR for many moons and I finally got around to reading it this spring!!

These were all solid 4* reads for me; I would honestly bump Blue Lily, Lily Blue to 4.5* as it was my favorite of the four.  I don’t even know how to review this series.  Stiefvater creates a world that is magical, complicated, and intricate, while at the same time keeping it tied down to reality with knowable, likable characters, a wry sense of humor, and strong friendships.  I fell in love with everyone in these books, and finished every book wanting more. 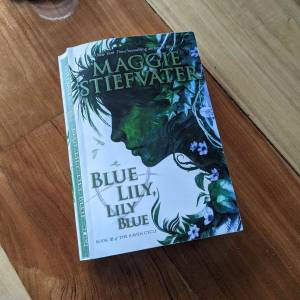 She ended up concluding the series in a way that was not how I would have chosen/how I hoped it would go down, but it still made sense and pulled things together.  Also, she really made me want an old Camaro even more than I did originally.

Call Down the Hawk is the first book in a spin-off trilogy that focuses on one of the main characters from the original series and his brothers, as well as what was ironically my least favorite part of the magic from the Raven Cycle – the dream magic.  I feel like more could be explained about the connections between the ley lines and the dream magic, as well as the trippy aspect of Ronan dreaming/creating things that he can then access in the real world but that we didn’t originally know were created by him… there are times that things get a little tangled (I was still definitely left with some questions at the end of The Raven King), but in many ways CDtH sort of shakes off some of those things and goes in its own direction.

All in all, if you like YA fantasy where the romance is more in the background than the foreground, there’s a lot to like here. The Raven Cycle does lean a little too heavily on tarot for my taste, but on the whole was new and different.  I really liked CDtH and felt like it did a good job tying to the original story while still doing its own thing.  However, I would definitely recommend reading The Raven Cycle before CDtH – technically it’s a stand alone, but I’m not convinced the story would make that much sense without the background you get from the original books.

A solid 4* for this batch.  Spoiler alert: I already read Mister Impossible, the second book in the Dreamer Trilogy, which just came out in late May or June or whenever it was, and it was also quite good – I can’t believe I have to wait all the way until next year to find out how everything ends!!