So after spending a couple of weeks basically reading books for younger readers, I suddenly was filled with the yearning to read something for grown ups!  I happened to have an unread duology by Nora Roberts sitting on the shelf, so I started with those and then went on a bit of a book-buying binge, something I very, very rarely do because I mostly use the library to check out books I haven’t read yet, and spend my money buying books I already know that I love and want to reread.  But there was something kind of magical about getting a box of books I’ve never read, especially since I got most of them either on the super cheap via Book Outlet (which I just discovered) or thanks to an Amazon gift card I had been hoarding for just such an emergency as this.  Anyway, the next batch of minireviews is more focused on romcom and fun.

This is another 1980’s romantic suspense from Nora Roberts, and really that’s about all the description you need.  I really liked the main characters and enjoyed the story at the time, but it was overall pretty forgettable.  The big reveal was a little bit confusing since it was someone who had been in the story earlier but I couldn’t remember very well, so it seemed like he either needed to be more in the story or just be a stranger, if that makes sense.  The pacing was good, and it was just nice to read a book about adults haha

A loose sequel to Sacred Sins, I ended up liking this one better.  In the first book, one of the main characters is a cop, and this book is about that cop’s partner, who I actually really liked in the first book as well.  This is one of those books where the reader knows who the murderer is from the very beginning, but that didn’t make it any less suspenseful.  A big part of this book is that the original person who gets murdered works for a company that provides phone sex, so that aspect was rather eye-roll-y for me, since it’s presented as a sort of “harmless” way to cheat on your wife, but overall the pacing and story really came together well for this one.

Side note – since I now publish little reviews on Litsy much closer to when I read the book, I’m back to mostly posting pictures of books that I take myself – which means you get a lil pic of Paisley with this one, and some background of my house/garden for some of the others!

My One Square Inch of Alaska by Sharon Short – 2* 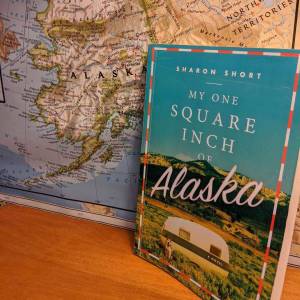 This was another traveling book club book, and another bust for me.  Part of it is the incredibly misleading synopsis, which acts as though the road trip that Donna and her brother take to Alaska is the driving plot of the book.  However, that was pretty far off base.  The book is actually about Donna, a teen in a small 1950’s Ohio town.  Donna spends most of the book whining about her life, and the author spends most of the book reinforcing any stereotype you can think of about small town residents, emphasizing how literally EVERYONE who lives in a small town is narrow-minded, prejudiced, uneducated, boorish, stupid, etc. etc.  As someone who lives in a small Ohio town, it was honestly genuinely offensive.  FINALLY Donna and her brother actually go to Alaska, and that entire part of the book felt completely unrealistic.  This was a book that annoyed me so much when I was reading it that I don’t even feel like reliving it via a cathartic rant. 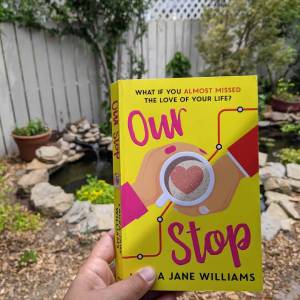 So the way I picked which books I was going to buy was mostly finding anything on my TBR that looked romcom-y, because that was really, really what I wanted to read.  Sadly, it’s been a pretty mixed bag.  So far none of them have been terrible, but I’ve struggled to find any that have that actual fun, fluffy magic.  Our Stop was kind of typical.  The premise is great fun – Nadia loves to read the “Missed Connections” section of the paper (online of course) and one day reads an ad that may actually be addressed to her.  Daniel finds himself attracted to a woman he does know – he overheard a conversation she was having when she was in the park that made him admire her brains and empathy, and he has seen her a few times on his commuter train in the mornings. But how do you meet a stranger without coming across as creepy?  And so he writes the Missed Connection.  Throughout the story, Daniel and Nadia keep almost meeting through a series of circumstances that feels believable.

Whenever this book was being a romcom, it was funny and enjoyable.  However, it felt a bit like Williams wrote this happy, lighthearted story and someone read and told her that she really needed to remember that this is the 21st century, and people aren’t allowed to have fun books unless they also get some social commentary.  So there are all these random conversations where characters talk about loads of buzzwords.  Literally none of those conversations felt realistic or natural in their context, instead coming through as incredibly polemic – Remember, while we might be having fun here, we’re still feminists!  Never forget!  There’s an especially awkward scene involving Daniel’s roommate bringing home a very drunk girl from the bar and Daniel preventing the roommate from having sex with her because “If she can’t say yes, it means no!”  Which yes, is true, but doesn’t really fit the whole romcom flavor??  It was things like that that I didn’t necessarily disagree with what was being said, it just didn’t need to be said because it had literally nothing to do with the story.  That whole scene is a complete one-off that doesn’t matter in the grand scheme of the plot, so apparently it was only inserted there to give readers a little mini-lesson on consent, I guess.

ANYWAY as seems to be the pattern with most of the books I got, this was fun for a one-time read, but not one I’m going to come back to again and again.  Enjoyable but not magical. 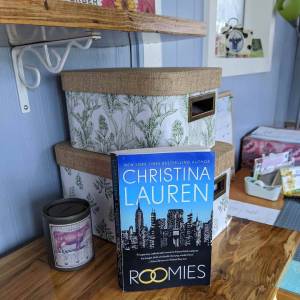 I literally cannot resist a marriage of convenience story.  It’s my all-time favorite trope, and even if a book sounds terrible, or has bad reviews, if it’s marriage of convenience, I’ll probably still read it!  Roomies ended up being a sort of meh read, mainly because it felt like the authors did literally zero research on green cards and how they work.  They were doing things like photoshopping pictures of themselves on a beach so they would have “photos” of their honeymoon… as though the government wouldn’t bother to check and see if they actually left NYC at any point?!  They were sending sexy text messages so they would be “on record”… as though they weren’t going to also be time-stamped??  It was just weird stuff like that that made the story feel really unrealistic and thus less enjoyable to me.  The actual romance was perfectly fine, although a smidge too angsty, but it was a struggle for me to get past their plans for “tricking” the government.