A while back my great-aunt passed away, and somehow my grandpa ended up with two boxes full of books.  Almost all of them are ‘inspirational’ romances published by Harlequin as ‘Love Inspired’.  At one point (not sure if you still can) you could subscribe and have a new book mailed to you every month.  Aunt Darby did just that, and now I’m in possession of somewhere in the neighborhood of 200 or so of these ‘Love Inspired’ titles.  Most of them are pretty cheesy but alright for a one-time fluff read.  I’m sure that I’ll binge through some of them periodically.  They’re perfect to grab out of the crate when I’m just looking for a quick, no-brainer book.  However, most of them will probably end up exiting this house after that one-time read, because they just aren’t worth the shelf space to me.  So if there’s one that sounds especially appealing to you… let me know, and I’ll be quite happy to mail you a gift!  ;-)

This book has what is basically my least-favorite trope of all time – the one where a woman shows up and tells a fellow, ‘oh, by the way, I had your baby years ago and never got around to telling you about it.’  It always fills me with rage when women act like it’s perfectly okay to make these sorts of decisions, especially when the baby was created when the people were in a loving relationship.  How is it ever okay to not tell a man that he’s a father?!?!!?

Still, Radcliffe manages to work around this problem in a way that seems plausible if still aggravating.  Unfortunately, this book was bland as plain potatoes – zero surprises, zero twists, zero anything remotely interesting.  Everyone just got back together and had a few adult conversations and then got along just fine.  Very mature and admirable, but not particularly exciting…

Dude has just returned from an overseas tour in the Middle East.  While he was there, a truck he was in got blown up and he is the only one who survived.  One of his best friends died in the incident, and the dude promised his friend that he would look up the friend’s sister and pass on a message.  Sister is determined to be a missionary in the Middle East, inspired by the life of her brother.  Unfortunately, the final message from her brother, as delivered  by the dude, is that the brother didn’t want her to ever come the Middle East, as things are a bit uncomfortable there.

Overall, this was actually a pretty decent story.  Ryan handled a lot of different issues really well.  I wasn’t sure where she was going with the tension over whether or not the sister should become a missionary, but she did a good job of balancing different perspectives on the issues.  Dude is also (understandably) suffering from PTSD, which I felt was handled sensitively.

But while the issues were done well, the story itself was a little weak, and I just didn’t ship Dude and Sister as much as I wanted to.  Plus, I felt a little let down that the puppy on the cover doesn’t show up until the VERY end of the book.  I mean seriously.  A decent 3/5 read, but not a favorite. 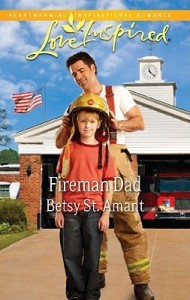 Marissa is a widow raising her young son on her own.  Her husband was a firefighter and died in a fire; Marissa also grew up with her dad as the town’s fire chief and felt like he was never there for her as he always prioritized work.  When Marissa meets Jacob, she is immediately attracted to him and begins to wonder if maybe there could be romance in her future.  But when she finds out that he’s a firefighter, she’s determined to not get at involved with him, as she’s sworn off of firefighters forever.

Honestly, this book aggravated me quite a bit as Marissa was just a tad too ridiculous.  She was so bitter and obnoxious about her dad, and I kept wondering that if the whole ‘firefighters work too much’ thing bothered her so much, why did she marry one the first time around?  She’s completely unreasonable on the subject, and when her son, who is in kindergarten or first grade, I can’t remember, talks about wanting to be a firefighter, she basically flips out.  Hello?  He’s six?  How many of us have followed our six-year-old dreams – or even remember them??  I skimmed through large portions of this story hoping that Marissa would become less aggravating, but she really didn’t.  A 2.5/5, and another book off my shelves and off to someone else’s!

The Perfect Gift by Lenora Worth 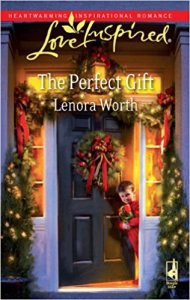 Goldie is in a car wreck and, dazed and disoriented, stumbles to – and into the nearest house, where she collapses on the couch.  Luckily, the couch doesn’t belong to a serial killer, but a super nice guy, widower Rory who is the father to two sons.  Turns out that Rory knows Goldie’s grandma, and after Goldie recovers from her head-whacking, everyone is on their way to being friends – or maybe more.

I really liked Rory and Goldie’s grandma, and I even liked Goldie – except when she did things that made no sense, like deciding that even though Rory is A+ Awesome, she can’t even go on a single date with him because she is planning to go back to her home in Baton Rouge (she is staying with her grandma during this story) – which is only like an hour away, so it really didn’t make a whole lot of sense.  Goldie’s motivations never felt natural, so it made the whole story feel a little wonky.

There were also random errors in logic.  At one point, Goldie is helping babysit Rory’s sons and nieces, because he has had a family emergency.  However, she can’t find the one son and starts to look around:

I can’t call Rory, she thought.  She’s just look around the house and yard.  Maybe Sam had gone outside.  But she would have seen him coming through the house since both the front and back doors were in plain sight of the open den and kitchen.

So, having determined that Sam couldn’t have gone outside without her noticing him, obviously Goldie starts by looking through the house, right?  No, of course not – she goes right outside and wanders around in the yard, the driveway, the storage shed, the bayou – for a couple of hours?!  Which would have been fine if she hadn’t JUST TOLD ME that there was no way that Sam could have gone outside to begin with!

Anyway, this was a nice little 3/5 read that was overall pretty relaxing and perfectly fine, but there were little glitches like that that just disproportionately aggravated me.

This is a collection of three novellas, each by a different author, and each for a different winter month.  There are actually twelve novellas altogether for a year of weddings.  In this first collection, I enjoyed each of the stories, although they didn’t particularly inspire me to seek out more of any of the authors’ writing.  (Although I have already read a lot of Denise Hunter’s books.)

December Bride by Denise Hunter – 3.5/5 – this was a really fun fake romance trope story, with characters who were relatable, pleasant, and had good chemistry.  The situation was plausible, and I liked how they both had their doubts, but it didn’t descend into nothing but internal angst.  The story is set in Chapel Springs, where several of Hunter’s other books take place, but was a completely individual story.

January Bride by Deborah Raney – 4/5 – this was my favorite out of the three, about an author who ends up writing letters to a fellow she has never met.  The whole story was just adorable fluff.  I loved the misconceptions they had about each other and how that played into their comfort with sharing letters.  I would have enjoyed having more of their letters and less of the drama of the fellow getting over his guilt about falling in love again (his first wife died several years earlier), but all in all a really fun little story.

February Bride by Betsy St. Amant – 3/5 – while this wasn’t a bad story by any means – and I actually really liked the characters – sooo much of this story was just listing to the protagonist internally bemoan how she just isn’t good enough to marry this guy and how their marriage would be doomed to failure if she even tried.  I think this story would have worked better at a longer length, where those internal monologues could have been broken up more with a bit of actual things happening.  Like, she had valid points and important issues she needed to work through, but because so much time was spent on those, the whole story kind of dragged a bit.

All in all, a fun collection of stories, and I’m looking forward to checking out Spring Brides next!