NB: All links in this post go to my personal reviews of the books mentioned.

This one was a traveling book club book that I was intrigued to read because Kristoff is the coauthor of the Aurora Cycle, which I loved.  While I found this one to be really interesting with some creative world-building, it was ultimately a bit too dark for my personal tastes, so even though it’s the first book in a series, I didn’t particularly feel engaged enough to read the next book.  Part 1 was really slow – if I hadn’t been reading this with the group, I would have DNFd.  Kristoff uses copious footnotes to explain various things, so loads of small print and a lot of infodumping.  The pace definitely picked up as the book progressed, though, and I could barely put it down during the final section.  There were some interesting characters and some terrifying creatures (sand krakens! Brilliant!) but while I did enjoy this one, the series just wasn’t for me. 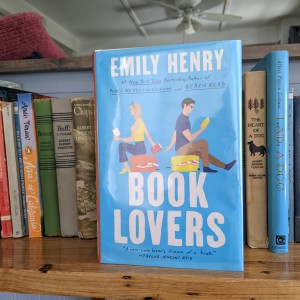 I really enjoyed Henry’s book Beach Read, but felt quite meh about People We Meet on Vacation (still not over how annoying the main character of that one was), so I wasn’t sure what to expect when I picked up Book Lovers.  However, even though it wasn’t my new most favoritest read ever, I did really enjoy this one and snorted with laughter on multiple occasions.  I feel like I have to add the caveat that literally I don’t understand city people, or people who think cities are amazing, or people who want to hang out in cities for more than like, an hour, much less live in them.  These people literally make zero sense to me – just… why???  So I did have trouble getting over the way Nora just literally LOVES the city and LOVES living in the city and can’t imagine anything else.  What a weirdo haha But I could appreciate her genuine love for her home nonetheless.

What I absolutely loved were the upside-down tropes – they were just written so perfectly, Nora’s self-awareness of them made everything work, and it was fantastic.  The snark between Nora and Charlie is perfect.  Out of all the romances I’ve read this year, they may be the couple I shipped the hardest.  I just really did genuinely feel that they brought out the best in each other, and that they could see each other’s real selves and appreciated each other for who they truly were.  (Wow, my tenses got really tangled up there, but you all know what I mean haha)  I could have done without the steamy scenes because that isn’t my thing, but I definitely didn’t feel like that was the only thing these two had going.

My biggest complaint about this book is the tension between Nora and her sister.  The whole reason Nora is spending her vacation in a small town is because her sister wants them to hang out together.  It’s obvious that Libby has something big on her mind, but we spend the entire book not knowing what it is.  Is Libby’s husband cheating on her?  Is Libby unhappy with the way her life is going?  Is she mad at Nora about something?  Does she have cancer?  Not knowing what was going on with her actually drove me somewhat crazy and detracted from my overall enjoyment because it low-key stressed me out for the entire book.  This is a book I would enjoy more the second time around, already knowing what’s going on with Libby.

Magic for Marigold by L.M. Montgomery – 4*

This was June’s book for Kindred Spirits group on Litsy, and was another Montgomery that I hadn’t read in absolute years.  My reread reminded me why – this is a perfectly pleasant book, but for some reason it just doesn’t stand out to me.  Part of it is because it’s very episodic in nature – it reminds me a lot of my least favorite Anne book, Rainbow Valley, where each chapter is just sort of its own little stand-alone adventure.  They aren’t bad, it just never really felt like there was an overarching story driving the book.  The only real common theme is Marigold wishing she had a friend, and several of the stories center on adventures wherein she meets someone and either they turn out to be not at all what she expected/an actual person who could be a friend, or something else prevents them becoming very close, usually distance.  Considering that this seems to sort of be the main point of the book, the ending felt especially odd, with Marigold becoming friends with a new neighbor, who is a boy.  She puts up with a lot of adventures she doesn’t want to participate in, like chasing frogs, to keep him happy.  Another new kid moves into the neighborhood, also a boy.  Boy A immediately drops Marigold and becomes best buddies with Boy B.  Eventually, Boy A comes back to Marigold and they restart their friendship, with Marigold realizing that it’s better to be friends in a situation where she can be herself instead of having to pretend like she likes all that “boy stuff” (not that Boy B is around to take care of that part of Boy A’s friendship needs) and the final line is something basically about her always being willing to wait for whenever Boy A needs her, or something kind of weird and dumb like that.  There are a couple of Montgomery books that I think always end up rated lower in mind because of the way they end, and this is one of them. (A Tangled Web, which was July’s book, is another.)  Anyway, all in all a perfectly pleasant read, but if I was rating all the books Montgomery has written, this one wouldn’t be particularly near the top.

The Randolphs by Isabella Alden – 3*

Alden was an aunt to Grace Livingston Hill, and an influence on Hill’s writing.  She mostly wrote under the pen name of Pansy, books similar to what Hill would write during the next generation – gentle romances and stories with Christian faith at the center.  I own a few collections of GLH that have three of her books plus one of Alden’s included.  What I didn’t realize is that The Randolphs is actually a sequel – the first book centered on the oldest (adult) son of the family, Tom, who apparently became saved during the first book.  Here, Tom is trying to live out his faith, but the main character is his sister Maria, who is skeptical of faith and how it can actually be useful for her life.  This was a perfectly pleasant story for the most part, but I did feel like Alden 100% copped out by having Maria’s actual transformation take place off-page!  It’s the old “she gets sick/injured and is bedridden and it makes her reassess her life” trick, and then Alden skips a couple of YEARS and suddenly Maria is a paragon and inspiration to everyone.  What a cheat!  Still, this was a nice little story, and honestly just a fun look at its time – this one was originally published in 1876 – I especially loved how one character they went on and on about how he came from “the west”… which turns out to be Michigan!

This was my classic that I started in May, but what with being out of town for a week in May and such, I didn’t finish it until June.  Although I’ve seen the amazing Muppets version of this story more than once, I had never read the original.  While this was a fun story – and I can definitely see how it appealed to young lads when it was published in 1883 – honestly, I liked the Muppets better!!  It’s still a fun and creative yarn, although things did get a little muddled when they got to the island, I thought, and the book was sadly devoid of angry natives and musical numbers.  A week or two ago my whole family sat down for the Muppet version, and I just can’t believe how they managed to capture the spirit and essence of the story and its characters so very well.  The original book is definitely worth a read – I’m quite enjoying working through Stevenson’s works.

One thought on “June Minireviews // Part 1”