Can I finish July before the end of October??? 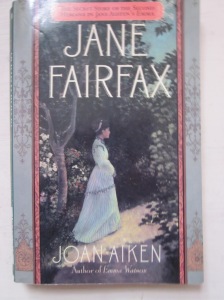 After reading Emma in June, in July I read this variation, which focuses, as Aiken says, on Emma’s other heroine.  While overall I enjoyed this story and getting some background on Jane, I didn’t care for the way Aiken really made Frank Churchhill be Jane’s way of “settling” – I think it would have been much more fun and happy if she had actually had these two care for each other more.  Still, a well done story with some interesting interpretations of Austen’s characters.

Jane Austen Made Me Do It  edited by Laurel Ann Nattress – 2.5*

This is a collection of Jane Austen-inspired short stories written by various authors, but on the whole it was pretty disappointing.  Several of the stories were about Jane Austen herself (except fictional), which is not my thing – I honestly do not like authors writing fictional stories about real people.  In one story, a bunch of Austen’s couples came back and complained about their lives, which kind of made it feel like no one in her books ended up happy, which I didn’t like.  There were a bunch of stories here and a couple of them were okay, but I don’t think I rated any of them higher than a 3.5* and most of them were more in the 2-2.5* range.  I was expected some Austen variations, but mostly got really random stuff.

To Have and To Hoax by Martha Waters – 3*

Wow, where to even start with this one.  I felt bad because I chose it for my traveling book club pick, and then it was kind of a bust.  The blurb on the back cover tells us that James and Violet are married but estranged. Violet receives word that her husband has been thrown from a horse and is dying, so she dashes off to the country estate, only to find him alive and well. Assuming that he was pranking her, she decides to get back at him with a prank of her own.  Sounds fun, right?  And we all know I’m a sucker for stories where the main characters are already married.  But what the back cover does NOT mention is that they’ve been estranged for FOUR YEARS and that during that time they’ve been LIVING IN THE SAME HOUSE.  So I’m supposed to believe that they were madly in love and got along great, had ONE argument and then spent the next FOUR YEARS barely speaking to each other while still living together?!  This seems just so ludicrous to me that I really struggled to get on with this book at all.  I could have understood if it had been, say, four MONTHS, or if James had gotten so mad during that fight that he flounced off to the country estate and they hadn’t seen each other since, but the way this was presented made no sense.

The book continued to make no sense by giving both James and Violet no real clear motivation for their actions.  Is it petty revenge?  An attempt to embarrass the other?  Trying to make the other person talk?  Attempting to solicit some kind of apology for past actions?  To hurt their feelings?  No clue, because the motivation seemed to change about every other paragraph.  And of course in the end, EVERYTHING is James’s fault, from beginning to end.  It’s all because he wouldn’t share his feelings because of all that “toxic masculinity” except she had a different phrase for it because it’s the Regency era.  You can’t see me right now, but trust me, I’m rolling my eyes a LOT.  On top of that, Waters kept having her characters swear by saying things like “Jesus Christ!” which was just so period incorrect and jarring every time it happened.  I tend to give authors a LOT of leeway with their historical accuracy, but this was so obviously wrong and unnecessary that I just couldn’t deal with it.

So why did this even get 3 stars, you ask?  Great question!  At the time, I think I felt it still had some funny moments and good potential, and I liked the secondary characters.  But in retrospect, it’s the negatives that have stuck with me.  This traveling book club book is due to come back to me next month – they travel to three other people and then return – and it sounds like the others hated it as much or more than I did, so I should at least have some blistering commentary to enjoy in November!