Oh no, I already started work at the orchard!  Does this mean I’ll NEVER catch up on reviews??  ::cue dramatic music:: 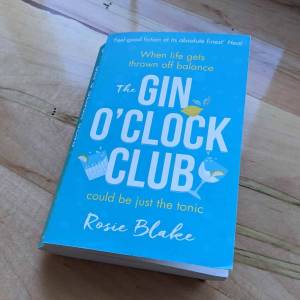 Add this one to my long list of books I wanted to like more than I did…  Lottie is caught up in her career and her grandpa, Teddy, is afraid that she’s taking life too fast, especially since Teddy’s wife died.  Teddy has three buddies and together they comprise the Gin O’Clock Club, which gets together for cards, shenanigans, and gin, and he enlists their help in showing Lottie that she needs to slow down and enjoy her blessings while she can, including her (live-in) boyfriend, Luke.  Basically, the guys convince Lottie and Luke to try some “old-fashioned” dates.  In exchange, Teddy agrees to try some “new-fashioned” dates, since Lottie is concerned that Teddy hasn’t really bounced back since his wife passed away.  Throughout the book, we also get letters that Teddy is writing to his wife as part of the way that he is working through his grief, and those letters were absolutely so touching and sweet without feeling over-the-top that they alone almost made reading the book worth it.

There was so much about this book that I liked.  Teddy and his friends were absolutely fantastic – funny without being cutesy – and Luke was a total dreamboat that no woman in her right mind would take for granted.  All the date ideas were great fun without being weird and I just overall loved seeing the older guys working with the younger folks and all of them learning from one another.

The problem – and it was a BIG PROBLEM – is Lottie herself.  There’s no other way to say it: she was a total bitch.  Like, hardcore.  She literally treats everyone around her like disposable trash, while spending her entire internal monologue saying Oh wow I’m treating everyone like disposable trash; I should really stop that.  And then NOT STOPPING.  And at first I was okay with it because she was showing growth, right?  Like she starts going on these dates and realizing how awesome Luke is and how important it is to hang out with her grandpa and how people are more important than things….  And then she literally just goes exactly back to where she started with no hesitation.  It was like the book was starting over!  There was also this big drama where Lottie was stressed out about something Luke was doing but Teddy couldn’t say anything because it involved someone else that he’d promised not to tell and like – the completely obvious solution was for Teddy to ASK this other person if he could tell Lottie??  But instead he just lets it keep going on and on and poisoning everything in Lottie’s life and it was SO unnecessary.

In the end, I honestly wanted Luke to run far, far away.  Lottie was emotionally and verbally abusive to him on more than one occasion.  I’m really over this whole “the female MC is a horrible person, but it’s really the fault of someone else/society, not her.”  Like no, she’s just a dreadful person, and if Luke had said/done half the things that Lottie did, he would have been crucified, but since Lottie is a woman, she gets a HUGE pass and I’m not okay with it.  I really wish that I had liked Lottie better, because I loved everyone else in this story, and everything else about it, including that the story is about a couple trying to stay together instead of breaking up and moving on to someone else.  All the not-Lottie characters were just delightful, but I couldn’t get past how horrible Lottie was.

For some reason, I never liked this story as much when I was a kid, but I thoroughly enjoyed my reread of it this time around, especially the character of Puddlegum.  It’s just been so much fun to read these again!

This was actually one of my favorite books that I’ve read so far this year.  I read The Martian last year and had super low expectations for it because I’m not usually a “space story” person, but I ended up really enjoying it.  Consequently, I decided to read his newest book when it came out this spring, and even though it went a completely different direction from what the synopsis made me assume, I honestly was totally here for it.  The pacing here was fantastic, the flashbacks that filled in the MC’s background were well-placed, and I couldn’t believe how much I fell in love with Rocky.  As the book was drawing to a conclusion I didn’t really see how Weir was going to give me an ending that both made sense and didn’t make me completely depressed, but he 100% pulled it off – I absolutely loved the way everything came together in the end.

There is a lot of science-y stuff here.  I have literally no idea if what he’s saying is realistic/true/practical or not.  I just rolled with the adventure haha

Last year I read Island Affair, and while it wasn’t my favorite romance ever, it was still a perfectly fun little read, so when I saw the next book in the series was out, I decided to pick it up.  Luis is the male MC from the first book; the female MC of Anchored Hearts is his sister, Anamaria.  Overall this was a pretty typical romcom read with likable main characters and a splash of angst.  I absolutely loved the warm families that both these characters possessed, even if those families weren’t perfect.  Some of the issues with the male MC and his dad dragged out a little too long for me, but overall I ended up liking this one better than the first book, and I would definitely read another book in this series.

The Night Dance by Suzanne Weyn – 3*

This was a retelling of The Twelve Dancing Princesses, and while it was okay, it was rather choppy and the entire story revolves around literal INSTA instalove, which definitely led to some eye-rolling moments for me.  I really loved the setting – Weyn chose to have this story take place just after the death of King Arthur, with the hero one of his knights trying to fulfill a promise to the king to return Excalibur to the Lady in the Lake.  This mean that even though the story was short, the world-building didn’t feel too compromised (since the reader already has the basic gist from Arthurian lore).  All in all, a pleasant one-off, but not a new fave.

One thought on “May Minireviews – Part 2”