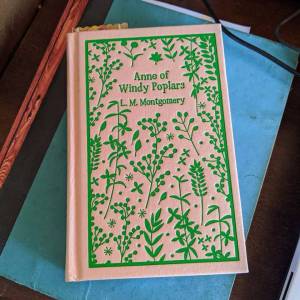 While Windy Poplars isn’t my favorite of the Anne series, I still find so much to love.  It’s also the only book in the series where we actually get Anne’s first-person perspective in the form of letters she’s writing (although there are also chunks of third person narrative as well).  I also like this book because it’s also the only story where Anne is really completely independent.  In all the other stories, even while she heads off to the next stage of life, she has a friend or family member with her.  But here, she’s really on her own, making completely new friends (and enemies!).  More than most of the other books, this one feels very episodic, but not choppy.  If you enjoy Anne’s shenanigans, and her habit of trying to help people’s love stories along, you’ll find plenty to enjoy here as well.

This book was published “out of order” – Montgomery’s editors wanted another Anne story, and so she filled in this gap in the Anne chronology with this book.  However, I never knew that until recently, and never particularly noticed a difference in the flow of the stories.  In this book we are introduced to an almost entirely new cast of characters, though, so it’s somewhat sad to leave behind Avonlea friends.

I’ve been purchasing fun copies of these books as I read each one, and was absolutely delighted to find this perfect clothbound copy for only $10 on Book Depository.  However, when I received the book it had a very odd caveat on the copyright page – “This book was first published in 1936.  This edition follows closely the original, unabridged text, with occasional alterations made to remove language that may be deemed offensive.”  Um… excuse me?!?!  I definitely don’t need the thought police interfering with the original text because some words may not be the words we use nowadays.  Thoroughly outraged, I did a somewhat absurd thing… I read this book twice.  First, I would read the chapter in the new book. Then, I would skim the chapter in my old edition, looking for discrepancies.  I recognize how ridiculous this is, but I really love this little copy and wanted to know the differences so that I could keep it.  This book was an absolute delight to read – it’s just the right size, the pages are wonderfully creamy in texture, I loved the font – everything!  Except, of course, for the possibility that random words had been edited to avoid offending my modern sensibilities!

Please note:  There actually was some controversy about this book at the time of publication.  Originally, Montgomery had titled the book Anne of Windy Willows, but for some reason the North American editors decided that was too close to Wind in the Willows and made her change it.  The North American editors also thought that some of the passages in the book were “too gruesome” and had them edited.  (There is one scene where Anne is in a cemetery with a local woman who gives her all the “dirt” on the people buried there, with some of the stories being pretty grim, and another chapter where Anne visits an elderly lady who spends the evening regaling Anne with tales of all the terrible things that have happened to her family members in the past, also pretty grim.  These chapters stayed in the American edition for the most part, but some of the most macabre stories were removed.)  In England and elsewhere, however, the changes to the title and the contents of the book weren’t made.  These are NOT the changes that this copyright note is referring to.  I don’t actually disagree with those changes simply because they were made when Montgomery was alive, and she’s the one who made and agreed to them.  That sort of editing is completely different from a random person deciding, decades later, to change the words of an author to suit a new arbitrary standard of what is and what isn’t “offensive.”

Before I read it, I tried my best to think of what could possibly be found in this story that would have had to be removed.  As I read, I found negative connotations about Indians and gypsies, the old-time usage of the word “fag” (meaning exhausted in this context), and frequent usage of the phrase “old pussy” to describe one of the grumpy older ladies in the book.  But were any of those things edited?  No, no they were not, which was obviously fine with me (this is all part of the package of reading a book published in 1936!), but left me a little confused as to what the editors would actually find offensive.  So do you want to hear the one and only difference I found between the two books?  (It’s possible that there were others that I missed, but this is the only one I could find.)

The setup here is that Anne has just persuaded a very stubborn individual to change his mind about something important.  Anne is telling this story to a friend, and here is how the friend responds –

Updated text:  “I hope you’ll never try to induce me to change my religion… because you’d likely succeed.”

This honestly just feels so completely unnecessary to me???  It’s so random – the character isn’t really even saying something negative about Muslims, just using it as an example of how Anne could probably convince someone to literally change their foundational life beliefs if she really put her mind to it.  Considering other words, phrases, and implications found throughout the story (as mentioned above), this one feels even stranger.  If it had been one change among many, I could have at least understood what the editors were trying to accomplish.  But to literally be the ONLY thing they changed in the ENTIRE story??  I’m still not over it.

At any rate, I overall did enjoy my (double) reread, but despite loving the physical qualities of my new copy, I don’t see myself buying another Arcturus edition again – which is really quite sad, because it really is a lovely edition.

Any thoughts on whether editors should edit older books to make them more “palatable” for modern readers?  For me, the other distressing thing was that there was absolutely no indication anywhere in this book’s description that any abridgment had taken place.  To me, this seems like something that should be clearly marked.  I’d love to hear your thoughts, though, so let me know what you think!!