Revell very kindly sent me a review copy of this book, which doesn’t impact my opinions.  I do apologize that this review is later than the due date assigned, but life has been a little topsy-turvey lately!

The story begins with Dillon quitting her job, breaking up with her noncommittal boyfriend, and heading back home to stay with her grandpa in a small town in eastern Oregon.  She knows her grandpa has been lonely since his wife died, and she’s hoping that she’ll have some time to figure out what she wants to do with her own life, while helping her grandpa out on his farm.  Dillon was basically raised by her grandparents since her mom, Margot, is a “free spirit” type who didn’t really want to be tied down to motherhood.  But when Dillon arrives at the farm, it turns out that her mom has also decided she needs a break from life, and is already living in Dillon’s old room.  As always, Margot has come up with a new, brilliant, money-making scheme and is determined to stay at the farm so she can get her new business off the ground.  Throughout the course of the story, Dillon comes to grips with herself, her mom, and her life, as she fixes up a vintage pull-behind trailer to live in.

So overall I really enjoyed this story.  It’s fluffy and easy to read.  Dillon is a pretty likable main character, and I appreciated that she was the one who made the decisions to uproot her life – so often these types of stories start with the main character hitting a string of absurdly bad luck.  But in this instance, Dillon herself is the one who decides that she wants more from life, and she’s the one who quits her job and tells her boyfriend that it’s over, and I liked that.  I also appreciated that the book wasn’t entirely romance – a lot of the story is about Dillon dealing with some of the issues between her and her mom, and I honestly would have liked even more of that aspect of the story.

Also, as someone who owns a vintage motorhome – one that was in pretty good shape when we bought it – I was a little eye-roll-y on how easily and quickly Dillon was able to get her trailer completely road-and-living-worthy.  But hey, that’s fiction.

And one more completely unreasonable thing to be annoyed about?  Dillon names her trailer and her truck – but it’s super obvious that the author doesn’t really understand the concept of naming cars, because she italicizes the names as though they are boats – you know, like The Minnow.  Except when you name a car, it’s more like naming a pet.  My car is Pruitt, not Pruitt.  No idea why, but it genuinely aggravated me to see the constant references to the names in sentences like this – “Yes, I wanted to get Jack looking good.  Couldn’t let Rose show him up.”  WHY.

In the end, this was a really relaxing one-time read that I liked and can recommend, but it wasn’t a book that I’ll keep and cherish and reread forever.

PS Also mildly confused by the cover image.  Considering the camper is a HUGE part of the story, how hard would it have been to put a picture of the actual kind of trailer that Dillon owns??  It’s VERY specifically named as a 1964 Aloha Oasis with a cab-over, like this one – 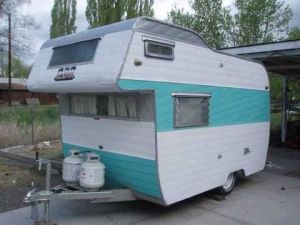