Well, well, here we are, a whole week into February!  Of 2020!  Seriously, 2020 doesn’t even sound like a real year, and I definitely can’t believe that over a month of it is gone already!  January was a busy month.  I wrapped up my season at the orchard, and worked a few random days at my new spring job at the greenhouse (regular hours should start late Feb-early March).  Tom built a crazy cupboard for the end of the lower room AND a gorgeous sideboard.  I’m actually filling them with stuff today and it’s SO exciting!  It finally feels like things are coming together in this crazy lil house.  We actually have snow today, which is exciting – we didn’t get any to speak of in January, kind of weird.  I love snow when I’m not driving in it, so I’ve been happy looking out my window today. 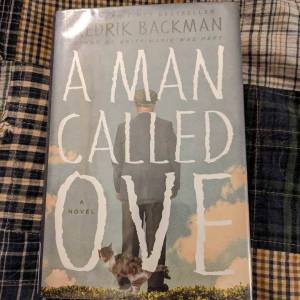 My overall favorite read was a reread, The Blue Castle by L.M. Montgomery.  But my favorite new read was A Man Called Ove by Fredrik Backman, mostly surprising because I wasn’t even expecting to particularly like that one, much less absolutely love it.

Probably How to Stop Time by Matt Haig.  I know that part of my problem with that book was reading it at the same time as Stoner, but still the overall down tone of the book, combined with some ?!?! moments left me feeling a little underwhelmed.

Only one this month – Not the Girl You Marry by Andie Christopher.  It was SO. AWFUL.  I don’t mind a little bit of steamy in my books, but this one was wayyyy on the vulgar side of the line and led to me instituting a new personal rule: If a book uses the phrase “dipping his wick” more than once, it’s not for me.  Geezy crimeny, it was dreadful.  Every single page was just about sex – having sex, finding sex, wishing for sex, wondering if someone else was thinking about sex, angling for sex.  UGH.  After a multi-page dissertation about the main character’s “bush” and whether her embarrassment about how “out of control” it was would be enough to keep her from giving into her desperate inclination to have sex with a guy that she apparently shouldn’t, I threw in the towel.  To top it off, both main characters were just horrible, obnoxious people.  I despised Hannah, who was abrasive, vulgar, selfish, and annoying.  Jack was also vulgar, selfish, and annoying, but instead of being abrasive he was slimy.  And of course the entire premise is that they are both lying to/using each other.  Setting aside the utter vulgarity of every page, it felt like the whole story would have read better as a fake relationship story, where they both knew the other was using them?

In fairness, there are LOADS of good reviews for this one – I’m definitely in the minority.  But I have zero regrets about bailing on this one, and wouldn’t touch another of Christopher’s books if you paid me.

Okay, so not so hot on reducing the TBR this month (despite reading 29 books!), but I’m sure I’ll see a difference in February, right??

I’ve also been doing a bunch of book bingos, which are kind of my new favorite thing!

I picked up The Ruin of Kings by Jenn Lyons last night.  I’ve had it on my shelf for a while (one of those random book subscription box books).  It’s a gorgeous hardcover copy, and the premise sounds intriguing, but it’s almost 600 pages long, has multiple narrators/timelines, has 10+ pages of glossary information in the back, is full of footnotes, and of course is set in an entirely different world from our own.  All that to say, I’m not completely sure this book is for me, but I’m going to give it a hundred pages to see how it rolls.  My usual method of reading is snatching pages here and there all day, but this is NOT that kind of book, at least not to start, so it’s currently my eating book (because yes, I’m one of those terrible people who reads every time she eats… my husband does, too, so we get along fine haha), and I’ve picked up Well Met (by Jen DeLuca) for my floater book.  It’s lighthearted and fluffy, so a perfect counterbalance.

On deck…  probably going to be –

So that’s the update here!  Hope all is well with all of you out there,  Happy reading!