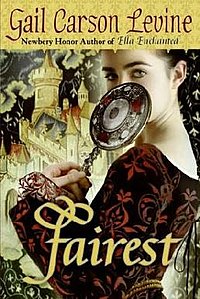 I recently reread Ella Enchanted, which was a childhood favorite and is still a book that I love.  Full of delightful characters, fun world-building, and a really excellent story, I’ve read it many times and still enjoy it.  Somehow, I hadn’t realized that Levine had written another book set in the same world as Ella, although not a direct sequel.  Part of me wishes that I still didn’t know that, because Fairest was pretty terrible.  The main problem was the heroine, Ava, who was incredibly boring, and spent the entire book whining about how ugly she was.  I mean CONSTANTLY.  Every.  Page.  And it never really felt like a lesson came out of that, or if it did it was very muddled.  If the prince thought she was beautiful the first time he saw her… was she really not as ugly as she thought?  Because here’s the thing, ugly/plain people often DO become more beautiful in our eyes as we get to know and love them, but if you’re just sitting there and someone walks into a room – you don’t know anything about them, and literally just judge them on how they appear at that moment.  So the prince is either lying, has horrible taste, or Ava isn’t actually that ugly.  All of those answers annoyed me.

Anyway, the rest of the story was also very weak – I’m never a fan of a plot where the villain is actually NOT the villain but is being controlled by another, in-the-background villain.  This seems convoluted and confusing.  All in all, I skimmed large portions of Fairest, and had trouble focusing on the pages because I was so busy rolling my eyes at Ava’s endless whining about her appearances.

This was my third read for #20BooksofSummer (you can find my original post here), and a thoroughly enjoyable one it was.  While I had read Frederica quite a while ago (2012), it had been several years.  At the time of my initial reading, it was actually one of the first Heyer books I had read (somehow, I didn’t discover her until adulthood!), but even after reading several of Heyer’s other books since then, I still found this one to be adorable and fun.  I think that part of the reason I love this one so much is that Alverstoke, the unwilling hero, falls in love not just with Frederica, but with her whole family.  I just loved the way that he went from being a selfish, lonely Mr. Grumpy-pants to being part of a happy, loving family.  While Alverstoke was a smidge *too* selfish to really be my favorite Heyer hero, he was still quite nice.  Frederica is a typical, but nonetheless enjoyable, Heyer heroine, being independent and intelligent without being too sassy and obnoxious.  She doesn’t take any nonsense from Alverstoke (or anyone else) and is such a wonderful sister.  My only complaint about her was how she could possibly be blind to her sister’s preferred beau??

All in all, Frederica is a delightful read for anyone looking for a bit of relaxation.  I wasn’t feeling super great over the weekend, and this ended up being the perfect book to devour. 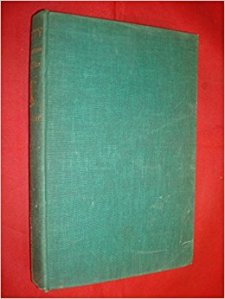 I purchased this book years ago at a book sale somewhere, but somehow had never gotten around to reading it before.  This ended up  being a perfectly enjoyable, although not outstanding read about a Highland fox cub who is raised in captivity buy then escapes and adjusts to life in the wild.  It had a very Jim Kjelgaard-y vibe for me, and it was fun to read an outdoors book about an area of the world that is unfamiliar to me.  It was written between the Wars, so it was also an interesting, if somewhat limited, glance into life when things were starting to really undergo a big cultural change.  While I’m not convinced this will be a classic that I read time and again, it was still engaging – and also Book #4 for #20BooksofSummer!

This book is so precious that I just wanted to eat it up.  Every time I thought the story couldn’t get more adorable, it did.  These are the kind of children’s books that I grew up with, and I can’t believe that I didn’t discover Nesbit until adulthood!  This wasn’t a story full of angst or the need for anyone to “discover” herself – just a roly-poly happy story about four children and some magical adventures.  I can’t wait to read more Nesbit!!!  #6 for #20BooksofSummer.

NB: #5 for the list is actually A Wrinkle in Time which I have already read but won’t be reviewing until I have finished some more books in the series.