Oh look, it’s June!  I had a few brief moments in May where I posted semi-regularly… and then I suddenly lost all interest in reading anything useful, and instead have read literally nine Pride & Prejudice variations in the last two weeks.  Sometimes you just need a bit of time for your brain to turn into mush, you know?  But I did pick up a “real”  book this morning (Ender’s Game) so we’ll see how that goes.  I’m not sure I’m ready to get back into real reading or not…

Anyway, this all means that things have been a little erratic on the blog, but since this is all for fun, that’s okay!  :-D  And, if you’re interested, I’ve been starting to review the terrible P&P variations over on a blog I created for just that purpose, although I’ll probably eventually post a summary link when I get done reviewing them all.

In regular life, part of the reason I haven’t felt much like reading is because it’s the time of year where I start living in the garden.  Our vegetable garden has about doubled in size this year from last year, so I’ve been working out there a lot.  There are always plenty of projects this time of year, and even a lot of my reading takes places outside! 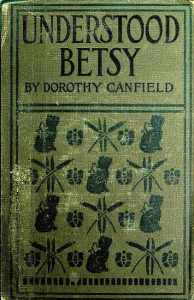 Have to go with Understood Betsy by Dorothy Canfield for this slot.  I hadn’t read this book since childhood, and I couldn’t believe how much MORE I loved it now!  A gentle, adorable story that I wanted to last forever.

Most Disappointing May Read

Wow, this is unusual, but all of my books this month were at least 4* reads!  While I didn’t really have anything besides Understood Betsy that felt magical to me, the rest of the books were still solid, not-disappointing stories.

I was working at the greenhouse, so May’s Rearview didn’t get written until the end of June!  Better late than never, right??  I read The Nesting Place, which I still highly recommend and have given as a gift for weddings/housewarmings/random several times since I read it last year.  A fabulously encouraging book about making your home the home that fits you, your family, and your needs.  While in some ways basic, the message is still freeing, and has actually inspired me to make several changes in my own house (including turning a dining nook into a pantry…)  I still pull this book out from time to time and flip through it.

I’ve really been working on reading some of my own books, and that number should drop some more when I finish reviewing the backlog of P&P variations, all of which were my own Kindle books, purchased back when I first had a Kindle.

Actually, I’m only reading one book right now.  Who am I?!  I just started Ender’s Game this morning.  Random, but I had had Ready Player One on my TBR for years, and randomly picked it up a few months ago.  Then, when I was telling my brother about it he said, “You realize that’s going to be a movie next month, right?”  What were the odds?!  Apparently good, because I’ve done it again with this one – I added Ender’s Game to the TBR back in 2013 or so, and it just came up on my random book draw – and I guess it’s becoming a movie very soon??  I’m like a backwards hipster.  I like stuff before I realize that it’s cool to other people.  ;-)

Approaching the Top of the Pile

The probably next five reads…

This is a tricky one this month as I have NOT been doing a good job sticking to my plan!  But as long as I decide that reading real books is the way to go, this is probably what will come up next…

There you have it!  Here’s to more books in June!