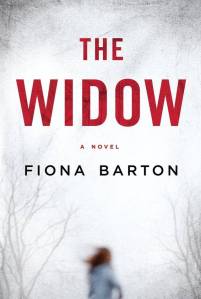 I usually find it moderately annoying when books told in 3rd person insist on heading each chapter with the name of perspective.  Like yes, I KNOW we’re hearing this from Josh’s point of view because the first sentence is, “Josh turned his head and saw Ellie coming down the hallway.”  I don’t need “JOSH” at the top of the chapter, sheesh.  But in this book, for some reason I loved the way that each chapter stated who it was about – but instead of names, it used their roles:  The Widow.  The Reporter.  The Detective.  While each of these main characters developed into individuals, the truth of the matter was that in this story, their roles were the most important part of who they were.

The Widow is one of those thrillers that I felt like I saw everywhere when it was first published (at the end of the post I’ll link to multiple reviews I read at the time), but since I rarely read ARCs, I’m always a couple of years behind everyone else.  :-D  (But that’s the way I like it…  ARCs are just too much pressure!  I don’t like all those deadlines and feeling bad if I don’t like a book someone sent me.  What I do like is if I feel like reading nothing but trashy Pride and Prejudice variations for a week like I have recently, it doesn’t matter!  No obligations!  Freedom!  :-D)

The pacing in this book was excellent, and was a huge part of why the book worked overall.  We start in June 2010, from the perspective of both the Widow and the Reporter, but after a few chapters, we pick up with the Detective in October 2006.  The Widow’s perspective is first person but everyone else is third person.  It seemed like this should have been annoying, but I actually liked it.  It meant that the Widow’s perspective was still the most biased one, and while I wouldn’t exactly term her as an unreliable narrator, she trended a bit that direction (don’t we all), and I was never exactly sure where the facts ended and her interpretation of the facts began.

At first, there doesn’t seem to be much connection between the case the Detective is working on in 2006 and the story the Reporter is trying to cash in on in 2010.  (Aside:  Don’t worry, everyone has real names in the book, and are only referred to by their titles in the chapter headings.  But for the simplicity of this review, I’m going with titles instead of names.)  But as the two timelines start to merge, bits and pieces come together, and it was done quite well.  I genuinely had no idea if the Husband was guilty or not – like I was pretty sure he was because he’s obviously a manipulative piece of trash, but then something else would come to light and I would wonder if he really was just a victim of circumstance who also happened to be a crappy person.  Why else would the Widow have stayed with him?  I can’t imagine staying with my husband if he was accused of such a crime – unless I was completely certain of his innocence.  Throughout the story, I was never sure if the Widow stayed with him because she knew he was innocent or because she didn’t know what else to do.

In some ways, the Widow was a frustrating person, because she had allowed the Husband to control her for so long.  But  like so many people in emotionally abusive relationships, she just didn’t see what he was doing.  And it’s one of those things – some of what he does isn’t exactly wrong, but then he goes a step too far.  Like it isn’t a bad thing to check in on your loved one and make sure things are alright… but double-checking her stories with other people to make sure they match is a bit creepy.

Pornography is also a big part of this story, and I really, really appreciated that it wasn’t presented as a harmless “private matter” like it so often is.  Instead, the dark truth about pornography was brought forward – how it’s quite addictive, and becomes something that people not only want to see more of, but to see more and more extreme examples of.  I personally feel that pornography is such a huge blot on our society, and it horrifies me how it’s so brushed off as not that big of a deal.  For a modern society that claims to be oh-so concerned about women’s rights, it’s kind of mind-blowing that watching endless hours of women being beaten and raped online is just a “personal choice” that other people shouldn’t get all judgy about, apparently.  While this book wasn’t remotely preachy, parts of this story showed how genuinely harmful pornography can be (and more often than not IS), how the images and concepts that we feed into our brains constantly start to become something that we see as a potential reality.  Anyway, that’s just my interpretation of a thread that’s running through the story, never something that’s explicitly discussed or analyzed in the actual book.

I will say that I felt like the weak point of this book was the actual investigation.  While I liked the Detective as a character, I wasn’t particularly impressed with his detecting skills.  It felt like he just jumped from one random suspect to another without a lot of proof, and there was a witness whose word they took entirely too seriously without any other collaborative proof.  Instead of working through the clues to find a suspect, he would find a suspect and then start trying to make the clues match, and the whole thing made me hope that he wasn’t ever in charge of finding out what happened to one of my loved ones, should I have need of a detective in my future.

Still, for me, this was an easy 4* read.  It was a sad book and in many ways difficult – it’s not a book that I would necessarily read again, but I would definitely be willing to read whatever else Barton brings to the table.  I recommend The Widow if you like your thrillers on the somewhat slow-burn side, examining different sides of a relationship and bringing dark secrets to light.

For some other perspectives, please check out all the reviews from blogs that I follow!  This one was recommended by –