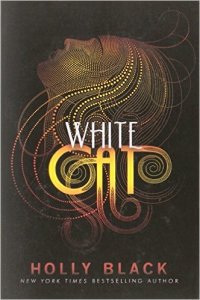 Uggghhh this was a series that was a little slow to start for me, but once it got me, it got me good.  I wanted it to last forever, and while I found the ending pretty satisfying, I could use about ten more books in this series.

Here’s the thing – it’s kind of hard for me to even explain what these books are about because the world building is so fantastic.  Black has created this alternate world where some people have an innate magic to do various things – to help people have better luck, or to have certain feelings, to have a different memory, to have a certain dream – or to kill: all with a single touch.  In this world, where the lightest tap of the fingers can “work” someone, everyone wears gloves and no one trusts anyone.

The narrator, Cassel, has grown up in a worker family.  Because working people is now illegal, most workers (including Cassel’s family) have turned to crime.  There are now big crime families (think mafia-style) throughout the country, and many workers turn to them for protection and work.  A couple of Cassel’s older brothers do some work for one of the local crime bosses.  That crime boss used to have a daughter who was Cassel’s age – until Cassel killed her several years before the story opens.

Like I said, I thought the first book started a little slow, and I wasn’t even completely sure that I was going to finish it.  Part of it was that Black doesn’t really explain anything, and at first I was kind of confused about this AU world and why people were wearing gloves and what the heck was even going on.  But as things started to fall into place and I could see the bigger picture, I got totally hooked.  I also really liked Cassel a lot – he’s one of those characters who always seems to only have choices between something kind of terrible and something super terrible, yet he really wants to do the right thing.  He’s smart but not infallible, and by the third book there is a good established cast of characters and I liked them all, even Cassel’s awful brother.  (My favorite was definitely his grandpa, and I mostly kept wondering, especially in book #2, why he didn’t turn to his grandpa for advice!)

These were books that definitely had some moments where I felt like the rug got pulled out from under me, but it was in a good way.  It was always something incredibly plausible – that I simply hadn’t considered.  I also absolutely loved the con work that Cassel pulls off throughout.  I have to clarify that in an objectively moral sense, these probably aren’t super great books since everyone is lying and pulling cons, but it makes for some incredibly entertaining and fast-paced reading.

By the third book, I just wanted things to keep going forever.  I found the ending satisfying, but also kind of an open door.  I like to think that Cassel and his girlfriend get married and change the way things are for workers, turning the entire crime family into a power for good.  And how fun would those stories be to read??

All in all, a 4/5 for this series.  I really enjoyed them, and definitely see myself looking for some of Black’s other books soon.

A special shout out to Stephanie, whose reviews first caused me to put this series on the list – you can read her review here!