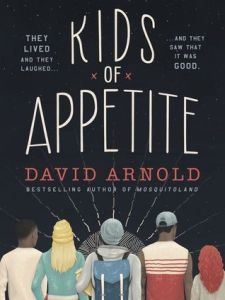 I first read about this book over at Heart Full of Books, although rereading Bee’s review makes me wonder what exactly inspired me to add it to the TBR?  Because while it doesn’t sound like a book I would necessarily dislike, it doesn’t really sound like one that I would immediately pick up!  But I’m really glad I did, as I quite enjoyed this story.  Not only was it engaging and funny, it had a solid story, character growth, and an ending that made me fill up with happy tears.

The story starts with present tense, first person – Vic narrating.  He’s in a police interrogation room with an officer who is asking him questions about a murder.  Because we have Vic’s perspective, we know that he is stalling for some reason, but we don’t know why.

This morning’s memory is fresh, Baz’s voice ingrained in my brain.  Diversion tactics, Vic.  They will need time.  And we must give it to them.

Vic’s diversion tactic is to begin telling the story of where he’s been in the last eight days – ever since his mom reported him missing.  And he tells it in his own way.

The story is told in alternating narration between Vic and Mad, a girl he meets along the way of the story.  There are a few other kids caught up in the story (Baz, his brother Zuz, and Coco), and despite the fact that I should have been rolling my eyes at this gang of ridiculousness, I loved them all and was completely invested in their story from the very beginning.

Pacing in this book was spot-on.  It’s the kind of mixed up timeline that makes you want to immediately start the book over and reread it once you get to the end and have all the pieces.  We have the past being told by Vic and Mad, with each chapter opening at the police station in the present (Mad is being questioned in another room).

While I don’t want to give too much of this story away, a big part of it is about Vic coming to grips with his dad’s death.  Vic loved his dad and they had a great relationship.  His dad died of cancer a couple of years before this story, and now Vic’s mom is thinking about getting remarried.  Vic ends up running away and having this sort of coming-to-terms journey that could have been cheesy and cliched, but instead is done so well.

One of the things that I really liked about this book is that Baz is a Christian.  It’s not this huge part of the story, or something that Baz goes on and on about.  Instead, it’s just an organic part of his character that influences some of his actions because it’s a part of who he is.  It doesn’t make him better or worse than any of the other characters – it’s just a layer of his essence, and I really appreciated the way that he was portrayed.

It was the same with Vic’s physical condition.  He has a condition with which he was born, but the whole thing was handled so tastefully.  Like it was a huge part of who Vic is and how he has become this person – but it wasn’t his defining characteristic.  It’s just another one of the layers.

There are a few reasons that this book can’t quite achieve a full 5-star rating for me.  There was a decent amount of swearing in this book.  And like I get that “that’s the way kids talk these days” or whatever, except I don’t really feel like it has to be the way kids talk these days, and I personally prefer to not have to read the word “fucking” a few times in every chapter.

The other thing is the murder itself – kinda unexpectedly graphic and intense.  Not a long, drawn-out thing but – just a bit of a surprise.  I wasn’t ready for it.

Finally, I was just a smidge confused by Vic’s mom.  Vic is taking this journey, following instructions that his dad had left for Vic’s mom.  It was never really clear if Vic’s mom had already done this?  Or had just… not?  I felt like her character was a little fuzzy, although I really did appreciate the scene where Vic and his mom were reunited.  Their conversation felt genuinely healing, like they were on the right track together going forward, and I loved that.

All in all, a solid 4 stars for Kids of Appetite.  There was a lot to enjoy in this book.  I loved the characters, the story, and the pacing, and if the swearing – and brief gruesome scene – don’t bother you, I definitely recommend it.  To me, this is what a coming-of-age novel should actually look like.

7 thoughts on “Kids of Appetite // by David Arnold”