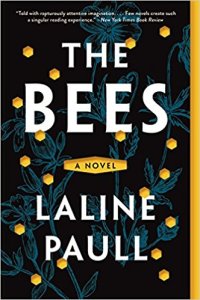 When this book was published a few years ago, I felt like I kept seeing it crop up  here and there.  The thing that drew me to it were the comparisons to Watership Down, which is a book that I really do enjoy, despite the fact that it’s a bit dark.  I actually like books about animals wherein the animals are still basically true to their actual nature.  (The book – not movie, obviously – Bambi also does this quite well.)  I also find bees to be quite intriguing and complex creatures – such an involved and precise colony of activity!

However, The Bees just didn’t quite deliver for me.  It had its moments, but the main problem was that there was basically no plot.  We meet our heroine, Flora 717, as she is emerging into adulthood.  And then the rest of the story is just Flora kind meandering around from here to there.  While the rest of the bees are subject to a very strict caste system – the family you belong to (Flora, Sage, Teasel, etc.) dictates your role in the hive – Flora 717 is an unusually large and strong bee, and is able to perform different jobs throughout her life, rather than just being the sanitation worker her type would normally be.  This allows the reader to see various levels of the hive, but added a rather disjointed feeling to the story.  Flora’s character felt like a tool Paull was using to take us around the hive.  Eventually, the number of times that Flora very narrowly escaped death also became rather implausible.  I mean, how much luck can one bee have?!

Paull sets up the hive as a theocracy.  The Queen is the Mother Bee and a goddess; the Sage are her priestesses who make sure that everyone is following their castes’ set duties; there prayers and religious ceremonies at set times of day, etc.  Overall this worked, although I was honestly disturbed when Paull rewrote the Lord’s Prayer to fit her weird bee religion – it felt a bit sacrilegious to take what is a very sacred text to many and use it in this context.  Religion is used to control all the bees – Accept. Obey. Serve.

Part of the problem with this story on the whole is that bees do really weird stuff in real life, and it was sometimes hard to differentiate between what was physically possible for bees to do, and what Paull was exaggerating for the sake of her story.  For instance, Flora 717 lays an egg, despite the fact that she has never mated with one of the drones.  I was super confused by this.  How is this even possible?  Finally, I had to actually look it up and see – and it turns out that male bees are created asexually, while female bees are produced sexually!  (Actually, it gets even weirder – did you know that a queen bee only makes one mating flight in her entire life?  During that flight, she mates with multiple drones, and actually stores their sperm inside of her.  This sperm lasts her entire life – usually around 4 years!  She lays thousands of eggs in that time span, and the queen determines at the time of laying whether or not an egg will be fertilized, and thus female, or not fertilized, and thus male.  How bizarre is that?!  And as a side note, the drone is killed during mating, as the process actually tears off his penis!??!  Bees are WEIRD.)  And I guess I can’t really expect Paull to put that all in her book, but it was still really confusing and distracting at the time.

Throughout, the story is arbitrarily violent.  I think this was to illustrate the ruthless society of the bees, which was fine, but I didn’t need all the gory detail.  I also couldn’t find any information wherein female bees actually kill the drones at the end of the season – they usually just drive them out of the hive and let them die.  So that whole slaughter-scene, which was genuinely gross, was one of the ones where apparently Paull was exaggerating to make her story more exciting.

And maybe it wasn’t exactly the violence that bothered me as much as just the overall crudity?  There are an awful lot of sexual references for a book comprised of almost all females who don’t actually mate, and, like I said, so much violence in descriptive depth.  There is also this thing where all the bees are way into waiting on the drones and catering to their every whim, etc. all in a very sexual way – which is kind of disturbing considering the drones are all their brothers??  Like it just felt super weird and uncomfortable to me, especially when the drones are having the workers groom them in very personal/sexual ways – it was just WEIRD.

There was also this kind of small but still annoying thing to me where the bees are having a very difficult time making enough food because of a very wet summer, yet the beekeeper still comes and steals honey from them.  I realize that Paull is trying to present this from the perspective of the bees, who would obviously be distressed by this, but she definitely comes through as being very negative about people interfering with bees.  I actually know multiple people who do raise bees, and absolutely none of them would endanger the hive by taking food that the bees actually need to survive the winter – it’s completely counterproductive!  Beekeeping has actually become very important as places for wild hives are becoming more restricted and there are so many problems with disease.  Beekeepers work with and for their hives, not against them.  While some of Paull’s presentations of humans – for instance, spraying pesticide on a field that then leads to bees dying – comes through as reasonable, this particular scene made no sense to me, because no beekeeper would take honey that the bees need.

In the end (this whole paragraph is spoilers) there is this whole thing where the queen gets sick and dies and the hive goes kind of crazy and then two of the battling factions of bees each produce their own potential queen bee – with no explanation has to how these bees could suddenly lay a female egg on their own.  Like it makes a little bit of sense when Flora does it, only because I had done all this bee research so I could actually make sense out of this stupid book, and it was obvious that Flora was at least partially a South African bee, some of which can produce females asexaully.  But we are given no reason to believe that any of the other bees are anything but the standard honey bee variety, so none of them should have been able to just hatch a female bee.  So that was weird.

I was also a little confused because at times the bees were 100% animals, yet at others there were strange humanizing moments.  For instance, at one point there is a reference to one of the Queen’s ladies-in-waiting doing something with embroidery – as though she had an actual embroidery hoop like a human lady-in-waiting.  At another point, there is this weird scene where some of the worker bees are serving the drones and it says something about the drones touching them in a sexual way… and I just have no idea how a drone bee can molest a worker bee?  Sometimes Paull would reference a bee’s “hands” when bees don’t actually have hands.  It just felt like Paull wasn’t sure how much she wanted to humanize the bees, and the inconsistency was confusing.

Because there wasn’t really much of a story, I wasn’t really sure what Paull was trying to say, either.  Was she just writing about bees?  Or was she trying to give us some kind of message about class or religion?  (In case you were wondering, the religion is presented pretty negatively, of course – a drug for controlling the masses; a tool for the elite few to use to control those masses.)  I wasn’t really sure and never had a clear idea of what the point of this whole book was.

All in all, 2/5 for The Bees.  I wanted to like this book because I like bees and I like books about nature.  But there just wasn’t enough cohesive story to make up for the crudity and violence throughout.  It’s also annoying when I have to stop reading a book and do research to find out whether or not the author is making crap up or if it’s true.  I think this book would have benefited from a short introduction that basically said, “Bees are crazy!” and explained a few of the weirder parts of bee society that are actually true.  Despite not really enjoying this book, I was weirdly drawn into it and wanted to find out what happened.  I also kept hoping that I would start liking it, but I never did.