I’m positive I read about this book on someone’s blog, but I’m not sure who… 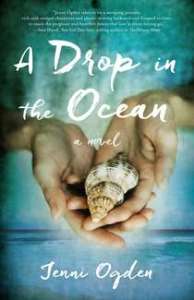 So this is my second book I’ve read recently set in Australia, and both books had a main character named Tom.  Are there a lot of Toms in Australia??  Also my husband’s name is Tom, so it always feels weird to read about another one…

Anyway.  This book is actually mostly about a research scientist named Anna, who narrates the story.  On her 49th birthday, Anna finds out that the funding for her long-term research project on Huntington’s disease has been discontinued, and she is now unemployed and not sure what she is going to do next.  Through a series of events she ends up renting a (very) small house on a (very) small island off the coast of Australia – a completely different experience from her apartment life in Boston.

I think I was hoping that this story would just be about Anna’s life on the island and getting to know people and whatnot, and at some level it was.  But on the island Anna meets Tom, who is also a scientist.  His work is studying sea turtles.  Anna falls in love with Tom, but even though he does become her lover, there isn’t really a sense of permanence about the relationship.  Anna is only staying on the island for a year, and there is a sort of big question mark as to what is going to happen to them when her time there is done.  It felt like way too much of this story was about Anna and her feelings towards Tom, which was disappointing to me, because the feelings weren’t particularly interesting, and felt somewhat weird considering Anna’s age – so much of her internal dialogue felt way more YA than mature adult.  Not that adults can’t have fluttery, romantic feelings, but Anna’s uncertainty and self-consciousness and jealousy just didn’t always feel like they fit her age.

There is an ongoing theme with Huntington’s disease, and as I have had a cousin (only two months older than me) pass away from complications of early-onset Huntington’s, and since his sister is also positive and beginning to show symptoms, I do have some personal connection, even if it isn’t super close.  While I felt like Ogden handled the disease aspect sensitively, it was pretty obvious that she is very much pro-assisted-suicide, a position that I cannot remotely condone.  While the book wasn’t necessarily polemic, it did venture that direction at times, and the reader is definitely only given one very specific position on a topic that to me has way, way more complications than Ogden’s simplified “this is just a nice way to make sure people don’t have to suffer if they don’t want to” explanation.  (It was also frustrating that Ogden only gave people two options: long, drawn-out misery and suffering or a quick, painless, basically pleasant death.  Especially after reading a book about hospice last winter, and after watching multiple relatives work through varying stages of cancer, I cannot possibly agree that killing oneself is the only “good” option…)  I was just really, really uncomfortable with the way Ogden consistently presented assisted suicide as a 100% great choice, and people who opposed it as being close-minded and unable to really understand the situation.  Of course, I always get aggravated when people inform me that my conservative viewpoint would obviously change if I was in a different situation.  Or… I’ve actually thought through it and this is what I believe from a logical decision, not just off-the-cuff?!

Anyway.  It also felt pretty obvious to me what Tom’s “big secret” was, and the way that it all played out really annoyed me quite a bit, which I’ll put below the cut.

Despite these negatives, I actually did enjoy reading this book.  Large chunks of it had nothing whatsoever to do with death or disease or suicide, and those bits were quite pleasant.  I loved reading about the sea turtles and the research there, and reading about Anna reconnecting with her love of the ocean.  And even though it felt somewhat odd, I even enjoyed Anna making up with her mom and the way those things played out.

Overall, A Drop in the Ocean had that typical A Novel tendency to make everything quite dreary and depressing, with even the “happy” parts somehow coming out a bit gray and surrounded by qualifications.  While I found it a nice one-time read, it definitely wasn’t a book that became an instant classic for me, especially because of the way it all concluded.  But apparently loads of people enjoy having all their characters end up with mediocre conclusions, so maybe this book is for you…