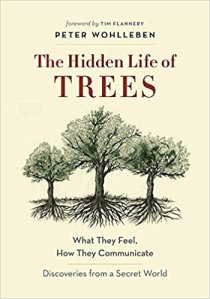 Do you ever read a book that you really, really want to like… but just can’t?  That’s where I ended up with The Hidden Life of Trees, a book whose premise really intrigued me, but the follow-through just wasn’t all that great.  This book had been on my TBR for a while, and I was pretty stoked when I received it as my second book from Mr. B’s Emporium.

Wohlleben manages a forest in Germany, and so spends a great deal of time with trees.  His book sets forth the case that trees can communicate with one another, and can work together as a social network to support and care for one another as well.  And I actually agree with all of those things.  Forests are magical, and it’s obvious when you spend time just quietly sitting in one that there is a great deal going on.

However, there were a couple of things about the book that just didn’t resonate with me.  The first was simply the lack of orderly progression through the book.  Each chapter just felt like a random essay.  The chapters didn’t really build together, and he references things both before and after his point of writing.  While it makes sense to direct readers back to something we’ve already covered, or even to mention that something may be covered more in-depth in a future chapter, Wohlleben does this in a way that sometimes left me confused – why is he talking about this if we haven’t actually read the section that’s two chapters ahead?  Why didn’t he mention this back three chapters ago when we were already talking about this topic?  The whole book felt rather choppy and disorganized, rather than flowing together as a whole.

The second thing that began to get on my nerves after a while was Wohlleben’s tendency to make leaps in logic.  He presents a situation, and then explains ‘why’ this is – as though there are no other options.  Such as this:

I mean, really?  Trees having memory is only way that they could respond to day length/temperature fluctuations?  It isn’t even that I agree or disagree about trees having memory.  It’s the way that it’s presented as conclusive fact, with no science or study behind it: “What this proves…”  But does it?

There are also moments when it feels like Wohlleben has no idea what he is doing or talking about.  My mind was absolutely blown by this paragraph, where he is talking about the dangers of invasive diseases and insects:

In connection with this, I sometimes wonder if foresters don’t play a role in the spread of the disease. I visited damaged forests in southern Germany, and then afterward, I was out and about in the forest I manage – wearing the same shoes!  Might there have been tiny fungal spores on my soles that traveled into the Eifel mountains as stowaways?

You think!?  I think we can mark page 216 as the point where I lost all respect for Wohlleben as a forester.  It’s pretty basic management technique when caring for any living thing, from dairy cattle to corn to trees to disinfect your clothing and shoes (and in many cases, things like the tires on your car as well) when going from unhealthy, diseased creatures to the healthy ones.  He goes on to say, “Whatever the case may be, since then, the first ash trees in Hummel have also been struck with the disease.”  !??!!?!?!?

There was also a definite attitude that only ancient forests really have this art of communication going on.  Young forests, or ones that have been planted, lack the true connection of the ancient forests.  And while this does seem true at some level… I also think that there is still communication and feeling within younger forests – and even artificial ones.  I’ve walked through many stands of planted pine, like the ones Wohlleben dismisses, and they still possess that sense of communion.  According to Wohlleben’s logic, virtually no stand of trees in the United States is really worth bothering about, as most of them are only a few hundred years old…

All in all, I was just rather put off by Wohlleben’s condescending tone throughout.  He would say things like, “Statistically speaking, each tree raises exactly one adult offspring to take its place.”  So… forests never get larger when left to their own devices?  And how can you make such a sweeping statement, anyway?  How can you say that, across the literally billions of trees on the entire planet, there is always a stagnant number of trees, because each adult tree is producing exactly one offspring?  I mean really.

I wanted this book to be magical, because trees are magical.  I’m honestly quite passionate about trees and forests; my sisters thinks that I may be a misplaced dryad.  (My tree is a birch, if you’re interested.)  But Wohlleben took all the magic out of the whole conversation.  His writing was rather dry and, as I said, condescending.  He used just enough science to make himself sound important, but not enough to make this a legitimate scientific book.  While there were bits and pieces that were interesting, Wohlleben himself aggravated me too much for me to really love this book.

A 3/5 for an interesting concept for some chapters that were decent to read, but overall not particularly recommended.

One thought on “The Hidden Life of Trees // by Peter Wohlleben”