For those of you who haven’t been following along, I’ve been reading Snyder’s ‘Study’ books, except they really should all be included under the Chronicles of Ixia title without multiple trilogies confusing everything.  Reading the three trilogies not in order would be quite confusing, so I’m not sure why they are listed separately at all.  At any rate, the first three books (Study series) focused on Yelena and had her as a narrator throughout.  The next three books (Glass trilogy) focused on Opal and had her as a narrator.  These final three books return to Yelena as a main character, and while she narrates large sections of them, Synder also gives us third person views from multiple other characters.

I really enjoyed the earlier books (although I found Opal’s story to be much weaker than Yelena’s), but was blown away by , how fantastic these last three books were.  They really came together for some fantastic storytelling.  With the world-building well established, Snyder was able to weave all kinds of threads together, and I was on the edge of my seat throughout. 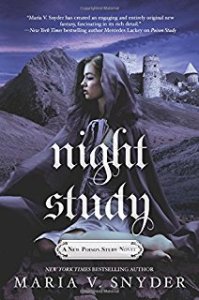 At first, I was a little leery of the multiple perspectives.  While I was excited to hear from some of the other characters, I was concerned that it would bog down the pace, and did a bit, especially in Shadow Study.  Snyder really wanted to give the readers a lot of background on Valek, and did so by having Valek sort of travel down memory lane, so it would be something like, “Valek sat in his office, sifting through papers.  But his mind kept drifting back to the day of his first mission…” And then it would launch into the story of his first mission, which was fine, except Snyder did not do a very good job of differentiating between flashback time and real time.  Instead of inserting a paragraph break, it would just sort of muddle back into the real-time story and was always a bit of a jolt.  Plus, we obviously couldn’t have Valek mentally meandering back in time when he’s in the middle of doing something exciting, so the Valek sections were slow on action and long on background.  It worked fine, and it was important to truly understand things that had happened to him in the past in order for the actions in the next two books to have their full impact.

In the last two books, the action turned up to about level ten and never looked back.   There were some great twists and I enjoyed every page.  I couldn’t  believe that Snyder was able to wrap everything up in Dawn Study, but she did.  And I really, really appreciated the fact that she didn’t feel a need to kill off a bunch of people in the final book just to prove how hardcore her story is.  (I don’t mind characters dying when it forwards the story, but it aggravates me when they are killed just so the story has more ‘grit’.)

I don’t really know if these books are considered ‘adult’ fantasy or YA, but while Yelena (and Opal) start out as teens, time actually does pass in this series, and everyone gets older.  Yelena is in her 30’s by the end, and Valek talks about being ‘too old’ at 41 for this type of thing.  I quite liked adults doing adult things for once.

While my understanding is that Snyder says she isn’t going to write any more about Valek and Yelena, she seems to have left the door open for revisiting the world they live in.  Another trilogy focusing on the next generation would be incredibly fun stuff.

If you’re interested in reading these books, I definitely recommend getting on Snyder’s website and reading the short stories that she has posted for free there.  Honestly, it was kind of annoying because I felt like some of those stories included some pretty crucial information, and really should have been included as prologues or something instead of ‘optional’ reads.

Also, I apparently lucked out, because Dawn Study was just published this year, so no waiting for me!

Final ratings:  4/5 for the Soulfinder trilogy; 5/5 for Dawn Study in particular; 4/5 for the Chronicles of Ixia as a whole.