So last weekend I was down and out with a terrible stomach bug and no time for blogging nonsense.  But I am back in the game this week, despite the fact that I have also already started working my autumn job at the orchard!  We are picking and sorting peaches like crazy – it’s been several years since we had a good crop around here, so everyone is quite pleased and the peaches are delicious.  I absolutely love working at the orchard, mostly because the owners are the best people I have ever worked for, so even though I’m sad that my summer is over so soon, I am enjoying my time there.

I haven’t done too shabbily here, with four off – The Girl from Summer Hill (weird), Water Song (needed to be longer), The Methods of Lady Walderhurst (disappointing), and What Lies Within (infuriating).  I had several reviews that weren’t on my TBR – five books, in fact.  It’s amazing that the TBR can be so long, and yet I keep finding myself reading books that aren’t even on it…

Besides two free Kindle books, I also added two more.  My grandpa somehow ended up with a gigantic box of books when my great-aunt passed away, and he’s decided that I should have them all.  They consist of some sometimes dreadful but sometimes alright Christian fiction called ‘Love Inspired’, and for a while (maybe you still can) you could subscribe and they would send you a book a month or whatever.  Apparently my great aunt was subscribed for YEARS.  Anyway, I took a small pile of them home, but most of them are parts of series, so they don’t count yet.  One, The Last Bridge Home by Linda Goodnight, seems to be a standalone, so I may try it.  Someday. 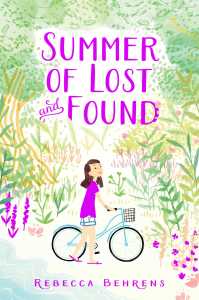 I also got another book from my Bethany Beach Books Box!  I switched from the YA subscription to the Children’s, and I think this may be a better fit for me.  I am kind of picky about my YA because I really am not into angst-ridden narratives.  Children’s books are so often simpler and cleaner, yet can still be incredibly profound.  This month, I got a copy of Summer of Lost and Found by Rebecca Behrens.  It looks like a lovely little book AND I got a beautiful hardcover copy.  I hope I really love this book because it is SO PRETTY.

Only two this time around – Farewell, My Lovely and Martin’s Mice.  And what a contrast those two titles are!

Total for the Personal TBR:  593 (holding steady, because apparently I can’t do math)

Total for the Series TBR:  Holding steady at 222.

Stephanie’s review of the latest Kate Burkholder mystery by Linda Castillo inspired me to go ahead and add this series, which currently has nine entries.  Stephanie really enjoys these books, and we frequently have similar taste.  :-D

Total for the Nonfiction TBR:  No changes – steady at 79.

Grand Total for the Week:  Four off and twelve on, so up a total of eight.  I consider anything under a net of ten to be a win, so go me!  :-D