June settled into a nice routine that is rolling into July (we’ll see how long that lasts!).  I’ve been getting a lot of chores done around the house and painting a LOT of fence.  Paisley the puppy is continuing the grow like a weed, and she and Waylon careen through the house in a way that makes me a little nervous about what will happen when they’re both adults!

Reading-wise, I mostly checked a BUNCH of Dee Henderson off the list, as well as finishing off the Michael Robotham’s Joseph O’Laughlin series.  It’s been good to get back into a good reading groove again, as I’ve also been working on my nonfiction assignments.

Watching You by Michael Robotham – this book was SO intense I could barely put it down.  The pacing was perfect and I was completely engrossed.  I loved the way that I had no idea who to trust.

Full Disclosure by Dee Henderson.  An entire book about Perfect Ann.  SO BORING.  And she wasn’t actually perfect, even though everyone goes on (and on and ON) about how perfect she is…  I kind of thought she was selfish and boring.  It was basically an entire book of everyone talking about how awesome Ann is… and then it turns out that Ann wrote all of Henderson’s books, so a whole new level of awkward made it feel like Henderson wrote an entire book talking about how awesome she herself is….  too weird.  And BORING.

Back in 2015, I didn’t have a lot of strong feelings about any of the books I’d read,  but I chose Dragonsong by Anne McCaffrey as my favorite read – I was really getting into the Pern books at that point – and Heart’s Blood by Juliet Marriner as my least favorite – it just felt too disjointed to really be enjoyable.

Last year, I was getting into the groove of Jim Butcher’s Codex Alera (which I LOVED), and Academ’s Fury was definitely my favorite book of the month.  Meanwhile, I really wanted to love The Watchmaker of Filigree Street by Natasha Pulley, mainly because the cover is GORGEOUS, but ended up kinda hating it, mostly because it made no sense.

June 2016 was also my first time participating in #20BooksofSummer – as of last year’s June Rearview, I had read six of my twenty… I’m actually ahead of that this year as I’m halfway through book #9!

Speaking of the 20 Books of Summer (hosted by Cathy), I’m actually not doing too badly.  Here’s the current list:

So I spent my holiday doing what everyone does on a holiday… reorganizing my TBR.  ;-)  I went through the Personal tab on the TBR (books I own) and updated a bunch of stuff.  I’ve actually read a lot of the books on the list already, but it was before I had the list written down.  And, back when I made the list, I didn’t bother putting a bunch of books on it since I had read them really recently.  But now I’ve decided that I want to keep a master list of every book I own with its “last read” date.  All that to say, I added books and checked books off, since the TBR number only reflects the books I haven’t read since I started book blogging back in 2011 (tumblr days!). 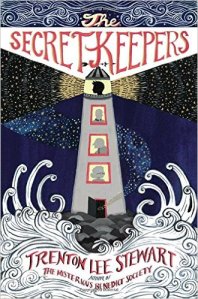 I’m really working on keeping a post a day going, so right now only The Secret Keepers by Trenton Lee Stewart is in the pile!