I received Still Life from the publisher in exchange for a review, and because of who I am as a person, I knew there was no way that I could just jump into the second book in a series, so I checked Cold Shot out of the library so I could read it first.  I’m really glad that I did that in this instance – these two books are really closely connected, and Cold Shot gives a lot of the background for the group of characters whose stories continue in Still Life.  I think I would have been confused if I had tried to read Still Life on its own.

These were the first of Pettrey’s books that I’ve read, although I’ve had her Alaskan Courage series on the TBR for a while now.

Both books focus on a core group of friends.  Griffin, Luke, Declan, and Parker all grew up together.  Several years ago Luke disappeared.  Another dramatic event had already fractured the relationship between Griffin and Parker, so while the remaining three friends have stayed in touch, things just aren’t the same. 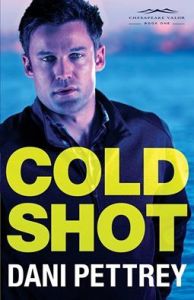 Cold Shot opens with Griffin working as a park ranger at Gettysburg.  It was actually kind of funny to me because my husband and I had been talking that day about going to Gettysburg this spring, and I had been reading some stuff online and recalling other trips I have made there (he’s never been), then I flip open Cold Shot and bam!  Gettysburg!  Another funny thing was that despite the fact that I’ve been to Gettysburg several times, I somehow never really realized how close it is to the Chesapeake Bay/Baltimore, Maryland.  So there was this kind of weird ocean/bay vibe that wasn’t remotely bad, but just funny because I never really think about Gettysburg in those terms.

Anyway, in the first chapter, Griffin interrupts some guys trying to do some grave looting in the park. Except it turns out that skeleton they’ve found is much more recent than Civil War era.  Griffin calls in forensic anthropologist Finley Scott to check out the body, and she confirms that the body has been here less than a year.  As the case unwinds, both Declan (now working for the FBI) and Parker (a crime-scene analyst) get called in as well, and soon the three are working through not only the case, but their shared past as well.

So overall I did like this book and was engaged in the story.  It kind of reminded me of Dee Henderson’s O’Malley series, where everyone in this group of friends just-so-happens to do something super helpful for crime solving, but I was willing to roll with it.  I really liked Griffin and Finley together and felt like they developed a solid relationship.  Pettrey also did a good job a weaving a theme of the importance of forgiveness (of others and of self) throughout without turning preachy.

However, the thriller/mystery aspect wasn’t particularly strong.  In some places, the twists felt a little left-field, and in others things fell into place a little too smoothly.  Also, they determine at one point that the sniper was shooting from a range of 1500 yards, and I looked it up and while it is possible, it’s like ridiculously difficult, to the point where it seemed hard to believe that a sniper that skilled would be able to just sort of fade away and no one would know where he was or what he was doing.  And while I liked Griffin and Finley together, their continual internal dialogue about not feeling good enough for the other began to get a little repetitive in places, feeling more like filler than actual story.

Still, a decent book, which was also encouraging because it meant that the book I had actually agreed to review probably wouldn’t be terrible!  Overall, 3.5/5.  Recommended if you like your thrillers to have a bit more romance than thrill.

Also, Stephanie reviewed this book last year when it first came out, so you should check out her review here.

PS I think this book lost a half star just because of the cover.  Like what is with that dude?  He looks like he’s cold and also possibly having some gas pain or something.  Weirded me out.  Although I will say that I’m overall not a fan of just a PERSON on the front of a book; that always seems weird and awkward to me.