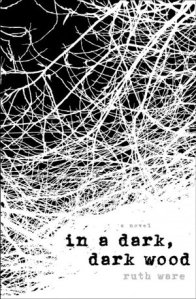 This was one of those books that I have troubled deciding whether or not I liked it.  The story was thoroughly engrossing – I basically couldn’t put it down, and finished the entire book in one evening!  But in the end, I also found the tale to just be rather depressing.  While the ending was satisfying in the sense that all questions were answered – some of them weren’t answers I really liked.

Still, for just pure on-the-edge-of-my-seatness, this would be a hard one to beat.  Ware does an amazing job building up a genuinely unsettling atmosphere.  Placing her characters in a remote location with a full glass wall looking out into the dark woods, the constant reminder that people can see in but you can’t see out – cutting off cell service and thus isolating the players from the world – the snowy weather – even the fact that the main character doesn’t have a car – it all comes together to create a setting and feel that is rather unnerving.

Through the use of flash-forward scenes (or are the other chapters flashbacks?), Ware also gives us slow glimpses of the “bad thing” that is coming.  This slow drip-feed is really more frightening than just knowing it all at once, and is done very, very well.  I was reading as fast as I could turn the pages, and was thankful that we had no evening plans, as all I wanted to do was find out what happens.

At the end of the day, I think I am going with 3/5, although I am very close to a 4/5.  I definitely would like to see what else Ware has written, but I don’t see myself ever returning to this story again.  There were a few rather big things about this story that really bothered me – not plotting-wise, but just personal-preference-wise, but they involve spoilers, so I’ll put them below the cut.

I’ve read multiple reviews of this book, all of which made me want to pick it up, so thanks to Cleopatra Loves Books (who does a much better job of actually summarizing the story, if you’re interested!); Reading, Writing, and Riesling; Bibliobeth and Chrissi Reads; and Fictionophile for leading me towards this terrifying read!

Seriously don’t read this if you haven’t read the book, because this type of book has to be read without knowing the ending!!!

First off, I think what really led me to not exactly “liking” this book is the fact that it felt like so much of Nora’s life was a waste.  Like the last ten years have been built on a lie because of the text that James never sent her – and now James is dead and there is no hope for reconciliation.  I felt like Nora’s life was never really resolved, especially with the ambiguous last sentence, which honestly annoyed me, because has Nora grown as a person or not??  We actually end up not knowing because Ware purposefully leaves us hanging.

Secondly, I didn’t like the way that Nora’s abortion was just totally blown off like it wasn’t a bit deal.  She says, “I don’t feel a crucifying guilt over the loss of a cluster of cells.”  That is really so belittling of what abortion actually is, and I’m a little tired of modern fiction acting like conservatives don’t understand “real science” while at the same time also claiming that all you get rid of during an abortion is a “cluster of cells,” when at ten weeks a baby already has developed vital organs, hands, feet, spine, skin, face, etc.  And at conception the baby has already become a completely unique individual.  If someone chooses to be pro-choice, or to have an abortion, that’s a separate argument – but no matter what, portraying abortion as something as minor as getting a tooth pulled is a gross misrepresentation of actual facts.

Finally, I guess in the end I felt like Clare won.  Sure, she got caught, but she still accomplished most of her goals.  James is dead, and she’s just killed a decade of Nora’s life and also left her so mentally scarred that I’m not convinced that she’s going to recover.

So while I give Ware credit for creating a story that I couldn’t put down, she also created an entire cast of characters that I didn’t really like or emphasize with, and I was left wondering if any of them had actually learned or grown from their experiences.