October has been a really busy month on the blog!  I managed to read/review eighteen books!!!  This was probably helped by a week of vacation and some quick reads, but still.  Good times.

Rainbow Rowell’s Attachments is going to be this month’s winner.  The characters were all so very likable, the setting done well, the pacing excellent – just an all-around really fun and entertaining read that still had a bit of meat to it.  It’s my new favorite of Rowell’s books. 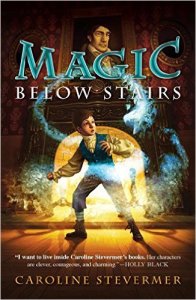 Kind of random, but I think I’m going with Magic Below Stairs by Caroline Stevermer.  The book itself was alright, but I think I just had higher expectations because I enjoyed the Cecelia and Kate books a lot.  This book was really just sort of a throw-away – not much happened, characters from the other books were only in the very vague background, and the plot was kind of weird.

I had a lot of fun answering the questions for FictionFan’s 100 Book Tag, and then the next day I spent an entire post bragging about the books I bought with my birthday money – poor taste, but what can you do?!

So, for those who are astute, you will notice below that the TBR has dropped.  This is due in large part to the fact that I add things to the TBR in a completely haphazard fashion.  Anywhere I see a book – someone’s review, GoodReads, a newsletter, the library, in a bookshop – I just throw it on the list.  Later, when I’m using my lottery method to decide what book is next, I check on GoodReads to see if it is part of a series and to reread the description (and usually the original review that inspired me to do the reading).  If the book is part of a series, it gets taken off the TBR and kicked onto the appropriate section.  Not infrequently, I decide that I don’t actually want to read the book at all.  This month I had a few books that I got from the library, read the first few chapters, and sent back unfinished.

All that to say – the TBR has dropped, even if I haven’t actually read that many books.  But I think the “dropped” part is the important part – right??

Actually, after a spurt of reviewing over the weekend, I’m in pretty good shape.  And I’ve finally started reading First Lord’s Fury, which means I won’t be starting/finishing any other books for a few days.  (Okay, so that’s kind of a lie since I’m also reading four other books right now, but, you know.)  Anyway.