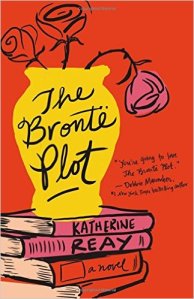 Okay, first off, I just learned how to produce the “ë” on WordPress like two days ago, so aren’t you proud of me??

A while back I read Dear Mr. Knightley, Reay’s first novel.  It was an alright read, interesting enough to make me want to keep an eye on Reay’s future work.  She has published two more books – Lizzy and Jane (which I haven’t read yet), and this one.  And, once again, I was handed a very bland, 3/5 read.

Lucy works for a guy, Sid, who is an upscale interior decorated/owns an antique shop full of expensive stuff.  Lucy is sort of the odds-and-ends person, who helps Sid keep track of all the details.  She also minds the shop and does a lot of the purchasing to keep stuff in the shop.  Lucy’s favorite bit is finding and collecting rare and expensive books for the store.  However, Lucy has a bit of a problem – she loves to tell stories.  So if there is a situation where stretching the truth may get Lucy what she wants – she does it.  And one of the ways she does that is by inscribing on the flyleaves of books – things like, “To Betty, for her birthday, 1856,” and then below it putting, “To my namesake – may this book inspire you the way it did me – love, Grandma Betty.”  In Lucy’s mind, the story adds value to the book and – the story within the story is what people love.

Of course, this all comes back to bite Lucy, because her boyfriend is super honest and really upset when he finds out what she’s been doing.  Then she ends up on this weird trip with her (now) ex-boyfriend’s grandma as they trot off to London and…  I don’t know, this book just really, really bored me.  I never liked Lucy, who, even after she realized that her lying was an issue kept doing it for quite some time before really realizing that it was a problem and actually making an effort to stop.  For long periods of time, things didn’t really happen.  The whole story with the grandma was, quite honestly, weird, and it felt like all the conversations between her and Lucy were just pieces of a script they were reading instead of real conversation.

A 3/5 read for alright writing, but overall just completely uninteresting.

Also, I read a few comments on GoodReads complaining about the “Christian/religious message.”  Honestly, I didn’t even notice it.  If it was there, it was just because some people happened to be Christians, or were going to church or whatever.  There was no “conversion,” and there wasn’t lots of time spent praying or debating theology.  Reay’s book is being published by Zondervan – a Christian publishing company – so I’m not sure why people get annoyed when a Christian publishing company publishes a book with Christian undertones???  To me, it definitely wasn’t anything overt or aggressive.

Finally, I have to admit that I’ve never actually finished any book by the Brontë sisters.  So I am 100% confident that I missed a lot of connections and interesting tidbits because of that.  However, I don’t think that there would have been quite enough interesting tidbits and connections to make the book higher than a 3/5 read.