July is gone already!!!  I always have very mixed feelings about the summer slipping away.  On one hand, I love going barefoot and having long days.  On the other hand:  So hot. Why. Please no.  In the end, I always just end up enjoying and complaining about whatever season I’m in, so there’s that.

And, of course, lots of reading.  There was quite the variety pack this month, and just when I thought I was going to get caught up on reviews…  well, there are six books back on the stack again! 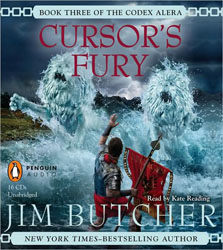 I think I’m going with Cursor’s Fury.  I just really think that the entire Codex Alera series has been brilliant so far.  I’ve also read the next book, Captain’s Fury, which I haven’t reviewed yet, and Princep’s Fury is next on the TBR stack.  After that, there’s only one more book!  The writing thus far has been so fantastic that I kind of wish that there were about twenty more.

A Girl of the Limberlost receives this dubious place in the Rearview.  After enjoying Freckles so thoroughly, Limberlost was an especial let down.  The writing was so disjointed, and I just couldn’t get past the complete nonsense that was Mrs. Comstock.

HOWEVER I was informed by a kind fellow reader on Twitter, @Trundlebedtales, that Porter’s daughter wrote a third and final installment to the Limberlost books, and I am hoping to get my hands on it soon.

So I’ve actually made fantastic progress on this challenge, and unless something incredibly dire occurs this month (like I go blind), I should be able to achieve all twenty books, as I am currently almost finished with #19, and should start my final book – Princep’s Fury – tomorrow!!!

Here is the updated list (links to Goodreads if I haven’t reviewed the book yet):

It really helped that I hit a stretch of books that I thoroughly enjoyed.

For those of you who don’t know, I’m weirdly obsessive with organizing the TBR, and have it on a spreadsheet divided into four different tabs:

And actually I’m way behind reading other people’s reviews, so there will probably be even more added.  There is always something fantastic to read!

Speaking of which, I’m thinking about giving Netgalley another try.  I have really mixed feelings about it because I kind of enjoy just reading whatever I want whenever I want, and when I have ARCs I feel obligated to work on those.  So for now I only have two that were just on the auto-approved list.  I feel less pressure with those.  Hopefully I will get those read and reviewed this month as well…  *gulp*

Six books in the queue: