Academ’s Fury is the second book in the Codex Alera series by Jim Butcher.  I thoroughly enjoyed the first book, Furies of Calderon, and was excited about this sequel – and it did not disappoint! 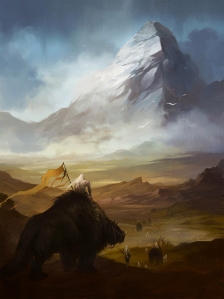 Absolutely GORGEOUS fanart of Doroga the Marat on his gargant, Walker. LOVE IT. By Sandara on DeviantArt

Like I mentioned in my review of the first book, I really appreciate Butcher’s emphasis on the idea that huge things hinge on small, seemingly insignificant decisions.  He goes on to say, “Significance is cumulative – but not always obvious.”  It’s the perfect way to introduce his story, which is actually several stories that interconnect and weave together, each one made up of individuals who do not appear to be important in the grand scale of things, yet each of them makes a decision that will impact their entire world.

The main thing you need to know about this book is that it is HIGH ENERGY.  There were multiple times that I would literally have to set it down and go do something else because it was making my blood pressure rise.  This was an incredibly intense story, told with perfect timing.  It’s a hefty book – the paperback weighs in at 702 pages – but it did not feel like it was too long or too slow.  When we were kids, and the family was watching a movie, if the movie got too intense, my littlest brother would have to get up and stand behind the couch so that he could literally jump up and down with nervous excitement.  There were times during this book that I almost reached that point, despite my 33 years!

More fabulous fanart by Sandara – we meet the Canim in this book as well – wolf-people warriors, another intriguing race of creatures.

We continue to follow the stories of our main characters from the first book – Tavi, the young shepherd boy who is now attending school in the capital city; his uncle Bernard; Bernard’s sister, Isana; a young cursor named Amara; and several of the bad (???) guys.  This book picks up two years after the last one ended, which I also liked.  Everyone has settled into their new roles, the bad guys that were defeated in the last book have taken some time to regroup and try a different angle this time around, and it all felt really reasonable and natural. 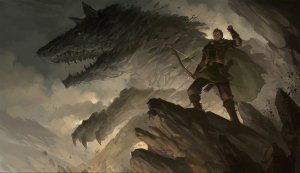 Just because I can, a third picture by Sandara – this one is of Bernard and his earth Fury, Brutus. I love how in these books, many of the Furies are in the shape of an animal and are named. And this is a FABULOUS picture of Brutus!

However, I can’t even begin to describe the plot, and I’m not sure that I want to.  Suffice to say that it was brilliantly done and that the Vord are some of the most terrifying creatures I have ever come across in fiction.  I LOVED the way that Butcher is greying the lines between good guys and bad guys, really bringing up some excellent questions about loyalty, duty, and honor.  It’s also great to have a hero who is at an actual disadvantage in his culture – everyone else can call up a Fury except for Tavi.  The way that he works to compensate for this lack is great.

Again, these are definitely YA/adult.  They are intense, there is non-graphic sex, and there is violence.  But they are brilliantly written and incredibly exciting.  Hopefully my heart is strong enough for book three…