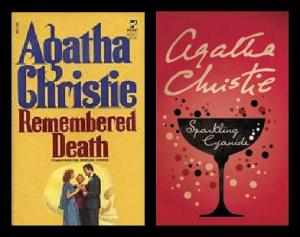 Iris Marle was thinking about her sister, Rosemary.

And so begins Christie’s Remembered Death.  Rosemary died of cyanide poisoning – ruled a suicide – almost a year before.  And for the first six chapters, we hear the perspective of each of the other people present at Rosemary’s death as each of them reflects on who Rosemary was as a person – and why they are glad she’s dead.

I love it when Christie gives us a rather unlikable murder victim, someone who could easily have been knocked off by multiple people.  At first glance, Rosemary had no reason to commit suicide or to be murdered – beautiful, friendly, dashing – really, the word is, in the old sense, gay.  That sort of frivolous, careless happiness that brushes off other people and focuses entirely on self.

When Rosemary died at her own birthday party, one would assume that she was surrounded by people she loved – but as Christie gives us the internal reflections and ruminations of each person present, we learn more and more how disliked she was by each of them, and how each of them had a very specific and very strong motive for wishing her dead.

Rosemary’s husband, George, has received an anonymous letter, which informs him that his wife did not commit suicide – that she was actually murdered.  Since receiving the letter, George – who is the exact opposite of the man you would expect to marry someone like Rosemary, being middle-aged, a bit portly, and a stolid and unexciting businessman – has methodically been examining the circumstances of Rosemary’s death, trying to find out the truth.

Throughout, Christie’s wry sense of humor is strong, with her ability to give us a clear picture of a person in just a few lines –

Lucilla Drake was twittering.  That was the term always used in the family and it was really a very apt description of the sounds that issued from Lucilla’s kindly lips … “Really, dear, I feel quite anxious about you – you look so white and washed out – as though you hadn’t slept – did you sleep?  If not, there’s that nice sleeping preparation of Dr. Wylie’s – or was it Dr. Gaskell’s? – which reminds me – I shall have to go and speak to the grocer myself – either the maids have been ordering in things on their own, or else it’s deliberate swindling on his part.  Packets and packets of soap flakes – and I never allow more than three a week.”

…Iris was too languid and too used to Mrs. Drake’s discursive style to inquire why the mention of Dr. Gaskell should have reminded her aunt of the local grocer, though had she done so, she would have received the immediate response, “Because the grocer’s name is Cranford, my dear.”  Aunt Lucilla’s reasoning was always crystal clear to herself.

Christie doesn’t lay out red herrings so much as she keeps the field of potential murderers wide, providing us with motives and means for multiple characters.  Her classic character, Colonel Race, who, like Superintendent Battle, shows up randomly throughout her writing, is one of the primary (unofficial) investigators into the case, as a friend of George’s.  I quite enjoyed his interviews, and Christie does a good job of giving us access to the same information – and, in some cases, more – as Race.

I also got quite a chuckle out of the appearance of an American in the story.  Christie consistently gives her American characters the most ridiculous accents –

“Went with Chrissie – that baby sure is hard-boiled!  She said it was a good joint.  ‘Honey pie,’ I said, ‘we’ll go just where you say.’  It was a classy joint, that I’ll admit – and do they know how to charge you!  Set me back the best part of thirty dollars.  But the band was punk – they just couldn’t seem to swing it. … Sure there was a table and some people at it.  I don’t remember what they looked like, though.  Didn’t take much account of them till the guy there croaked.  Thought at first he couldn’t hold his liquor.  Say now, I remember one of the dames.  Dark hair and she had what it takes, I should say. …  No, not [the girl in the green dress].  She was skinny.  This  baby was in black with some good curves.   … I watched her dancing – and say, could that  baby dance!  I gave her the high sign once or twice, but she had a frozen eye – just looked through me in your British way.”

Seriously, Christie.  What even.  I love it.

At any rate, while there was a bit of a twist at the end, in retrospect, all the clues were there if I had been able to read them.  A definite 4/5 for this read.  Just twisty enough to be interesting without being tortured, enough humor to leaven the story, excellent pacing, and some brilliant characterizations.

*As an aside, I think I am going to start including the first paragraph of the book, when I still have the book around to reference.  Lately, I’ve become quite enamored with how a book hooks me from the very beginning.