Well, as of last weekend I had these grandiose ideas in which I would actually review the stack of 7 (!) books awaiting attention before I wrote April’s roundup, but seeing as it is already May 5, I think I will just finish April off and let those additional reviews fall where they may!

April was a super busy but honestly fantastic month.  I am still loving my new job.  I really hadn’t realized how much I hated sitting in an office all day until I stopped doing it.  I’ve switched from production work in the back to working the retail section (annuals).  That’s alright, but I am definitely homesick for production, which may be my life calling.  Still, even in retail I spend most of the day outside or in a greenhouse, playing with plants and listening to the life stories of random people who somehow think telling me about themselves will help me direct them to better plants (and maybe it does??).

Still, this whole “full-time” thing is for the birds!  So little time for real life!  I’m okay with it since it’s just temporary…  and the whole summer stretches out full of long days of being productive and happy around the homestead.  Yay!  I am really excited about devoting a lot of time to wrapping up some remodeling projects (read: SO MUCH PAINTING), playing in the gardens, and helping out my grandpa with his place.

As for reading, my job actually allows tons of time for it, as I have to take an hour lunch every day.  So I take my PB&J and a book (or two), and hide out on my favorite bench in the sample gardens – it’s tucked away under an arbor behind a nice screen of shrubbery – quite secluded and peaceful.  If one must take an unpaid lunch hour, one may as well do it outside with some good reading material! 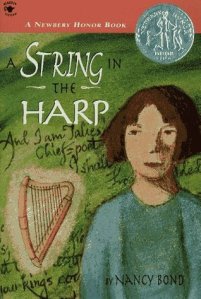 I think I’m going with A String in the Harp for this one.  Bond’s story was just so perfectly crafted.  Even though it’s not a book with a lot of action, the characters are so perfectly drawn, and the prose so wonderfully written, that I found myself slowing down so that I could drink in and savor every word.  Bond has created a beautiful story about grief, hope, and family that I highly recommend.

I think I am going with Dragonsblood for this one.  I had really enjoyed Dragon’s Kin a great deal, and came into Dragonsblood looking forward to seeing what Todd McCaffrey would do next with Pern.  But at the end of the day, Dragonsblood felt like a lazy attempt to capitalize on the popular series.  The plotting was weak and full of gaps, the writing was emotionally distant, and there were far too many times where a character would conveniently guess the exact information they needed to know to solve a huge problem.

Added to the TBR:

Well, I’m still quite behind on reading reviews from other blogs, but fear not – the TBR is still getting longer!

Currently, I have my TBR on a spreadsheet with four tabs:

I also think that May may finally see the end of the Pern series.  I started reading Dragonheart today, and there are only three more titles after that one.  (So far… apparently Anne McCaffrey’s children have the rights to continue with the series should they so chose.)  While I’ve enjoyed (most of) this series, I’m also looking forward to getting into something new.  Maybe something a little less dragony and not over twenty books long!!  I started reading the Pern books last May, so it has literally taken me a year to get through the series!